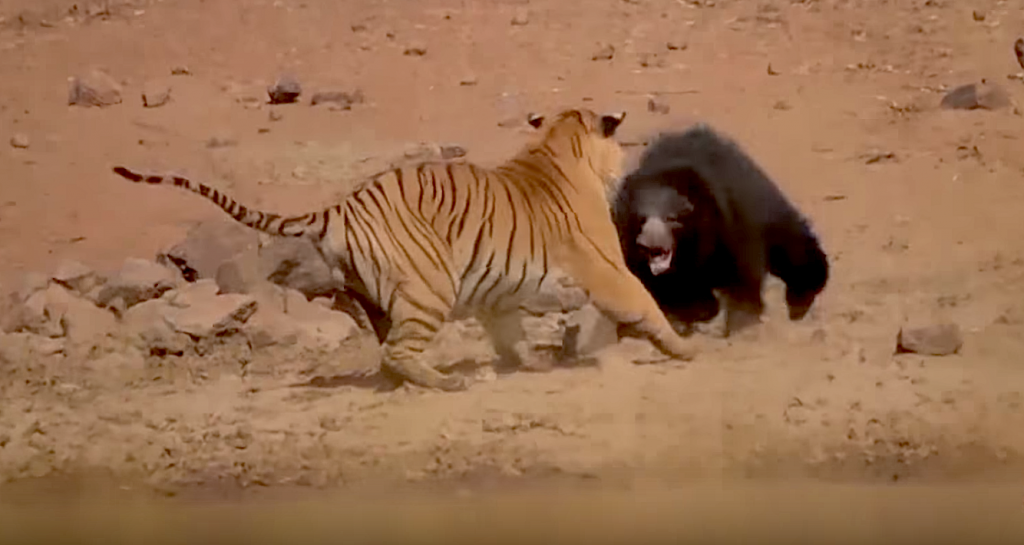 (EnviroNews World News) — Tadoba National Park, India — Ladies and Gentlemen! Tonight, at Tadoba National Park in India, we have a battle for the ages as two apex predators go head-to-head to determine who will wear the crown of king of the jungle. In one corner, we have a Bengal tiger, and in the other corner, a sloth bear.

The video was published at Global News’ YouTube channel as well as on their website. Naturalist Akshay Kumar was leading a tourist safari at Bamboo Forest Safari Lodge and filmed the clash. A mother sloth bear and her cub wandered down to the watering hole where a Bengal tiger was bathing to cool off. What happened next stunned onlookers and tour-guides alike.

The Bengal tiger (Panthera tigris tigris) can reach a length of 10 feet (3 meters) and weigh up to 550 pounds (249 kg). These powerful cats have been known to jump as far as 25 feet (8 meters). It is currently an endangered species with fewer than 3,000 animals remaining in the wild. Tigers in India face a loss of habitat, dwindling food sources, and poaching for their fur and for supposed healing properties in traditional medicine. Problems can occur when humans encroach on a tiger’s habitat – and these problems can turn lethal when an otherwise ordinary jungle cat turns man-eater.

The sloth bear (Melursus ursinus ursinus) can reach a height of 6 feet (1.8 meters) and weigh up to 310 pounds (140 kg). The sloth bear’s diet typically consists of termites and ants, but it will eat carrion, honey, berries and other insects and plants. The number of sloth bears in the wild is estimated between 7,000 and 10,000 animals, placing the species in “vulnerable” status according to the International Union for Conservation of Nature (IUCN). They face a loss of habitat and are threatened by farmers who retaliate when the unknowing bears raid crops. Bear bile is used in traditional medicine. Sloth bears are not typically aggressive; they prefer to bluff charge and run from a fight. But when it’s a mother and her cub, all bets are off. Here’s how the epic showdown unfolded:

The tiger stalks the bear, who gains some distance to make its first charge and pushes the tiger back. As they engage, the tiger connects with a one-two punch combination and climbs on the bear’s back. The bear squirms loose, takes a left to the head, and lunges with her muzzle. The tiger backs off momentarily.

The combatants attempt to intimidate each other. The bear gets shouts of encouragement from the cub in her corner. Weaving back and forth, the bear rises on its haunches in a series of feints. The tiger retreats slowly.

The Tiger grabs the bear by the back of the neck. They tangle muzzle to muzzle. The tiger on its back looks to bring its powerful hind legs into play. The bear remains to the side of the tiger avoiding those legs and their raking ability. The two fighters stand up. The tiger’s maw is locked onto the bear. The bear rolls onto its back. The tiger won’t release and holds the bear like a ball in its powerful front paws. It’s jaw firmly clamped. Both animals look weary from the fight. The bear lands multiple kicks to the tiger’s head with no seeming effect.

With a foot to the throat, the bear gets the tiger to release it. The tiger tries to bite down again, but the bear blocks it with its foot. The tiger lands a slow right and a left. It hovers over the bear. The bear then lands a flurry of blows with its back feet. The tiger clamps down with its jaws again, but a couple of well-placed paws keep the bear from becoming trapped again. The tiger is breathing heavily now; the bear moves in with another flurry of punches. The tiger’s rights and lefts seem like they are lacking their earlier power. The two animals hug each other as the tiger grasps with its claws.

Watch the amazing video to find out how this fight comes to a close. The conclusion may very well surprise you.

Tadoba National Park is known as “Land of the Tigers” and has approximately 43 Bengal tigers on its 667 square miles (1727 square km). It is located in the Chandrapur district of Maharashtra, India. It became a national park in 1955.