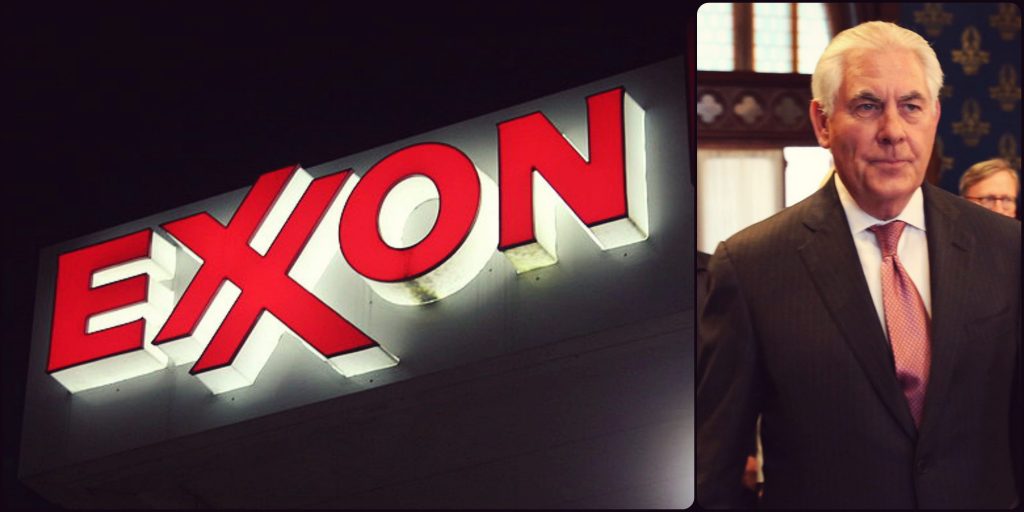 (EnviroNews USA Headline News Desk) — In a brief filed May 19, 2017, New York Attorney General Eric Schneiderman revealed that additional subpoenas have been served to ExxonMobil regarding the company’s potential destruction of evidence in a current climate fraud investigation. The ongoing exploration by the New York Attorney General’s Office (NYOAG) focuses on whether Exxon misled the public, its shareholders and the Securities and Exchange Commission (SEC) about the risks of climate change.

Investigators discovered by chance that Rex Tillerson, former Exxon Chief Executive Officer (CEO) and current U.S. Secretary of State, used a secondary email account under the name “Wayne Tracker” (Wayne is Tillerson’s middle name) from at least 2008 until 2015. The NYOAG claims Tillerson used this alias to discuss sensitive issues, including climate change and its potential effects on Exxon’s business outlook as an oil company.

A series of investigative reports from Inside Climate News revealed Exxon’s own scientists understood the negative effects of carbon pollution on the climate as early as the 1970s and warned company executives. A 1982 internal Exxon primer stated fighting global warming, “would require major reductions in fossil fuel combustion.” Rather than practicing transparency, the company perpetuated an extended climate change denial and misinformation campaign. The NYOAG now seeks to hold Exxon accountable for defrauding its shareholders.

As part of an initial yearlong probe, the NYOAG first subpoenaed documents dating back to the 1970s from Exxon in November 2015. In March 2017, Exxon admitted it had failed to produce up to a year of Wayne Tracker emails, stating a technology glitch may have been responsible. Exxon later recovered months of the emails but at least a one-month chunk is still missing, and Exxon has also failed to turn over other documents from top executives. In return, Schneiderman has taken depositions of Exxon executives and issued new subpoenas to determine whether the oil giant willfully destroyed evidence.

“We have and will continue to use all of the tools at our disposal to get to the bottom of these issues and to further our investigation,” Amy Spitalnick, Schneiderman’s Press Secretary, told Inside Climate News.

One example of a document under scrutiny is a 2014 report released by Exxon to address questions “raised recently by several stakeholder organizations on the topics of global energy demand and supply, climate change policy and carbon asset risk.” Exxon stated in the paper that after an “annual analysis of the global outlook for energy… we are confident that none of our hydrocarbon reserves are now or will become ‘stranded.’”

In the May brief, the NYOAG also seeks dismissal of Exxon’s renewed request in April for a federal injunction against the investigation, which it originally filed June 15, 2016. Exxon wants to depose both Schneiderman and Massachusetts Attorney General Maura Healey, who has partnered with New York for this investigation and filed a similar brief to Schneiderman’s.

Both attorneys general argue the investigation should be handled in state courts in regard to state fraud statutes. The New York probe is based on the state’s Martin Act, which forbids “any fraud, deception, concealment, suppression, false pretense,” or “any representation or statement which is false,” while granting states extensive powers of discovery.

Exxon alleged in the April request that the climate fraud investigation violates its “constitutional and common law rights.” According to Inside Climate News, Exxon also claims the investigations are politically motivated and the two attorneys general seek to silence the oil company and anyone whose views on climate change differ from their own. Exxon has until June 16 to respond to the new briefs.

In a March statement, Carroll Muffett, President of the Center for International Environmental Law (CIEL), described Exxon’s failure to disclose relevant emails and documents in this manner:

[The] “loss” of high-level communications directly relevant to climate risk adds to mounting evidence that the company engaged in a decades-long — and apparently ongoing — pattern of concealment, deception and potential fraud on climate change.

Schneiderman’s office is also examining President Trump’s potential conflicts of interests and/or violations of the emoluments clause, which prohibits individuals holding federal office from accepting foreign payments. He’s following in the footsteps of former U.S. Attorney Preet Bharara, whom Trump fired in March, while he was in the midst of an investigation into Trump’s stock trades. At the end of March, Schneiderman brought public-corruption expert and prosecutor Howard McMaster from Bharara’s office onto his team to aid in the investigation of Trump’s finances.

“They fired [U.S. Attorney General] Sally Yates. They fired Preet Bharara. And they fired [FBI Director] James Comey, the very man leading the investigation. This does not seem to be a coincidence,” Senate Minority Leader Chuck Schumer said in May, while calling for a special independent prosecutor into the Trump campaign’s connections to Russia. Like Bharara, Comey was fired while pursuing an investigation – in his case, into Trump’s campaign for potential collusion with the Kremlin. Yates was fired after refusing to uphold Trump’s executive order banning travelers from seven Muslim-majority countries. The NYOAG is also part of the multi-state lawsuit against Trump’s revised immigration ban.