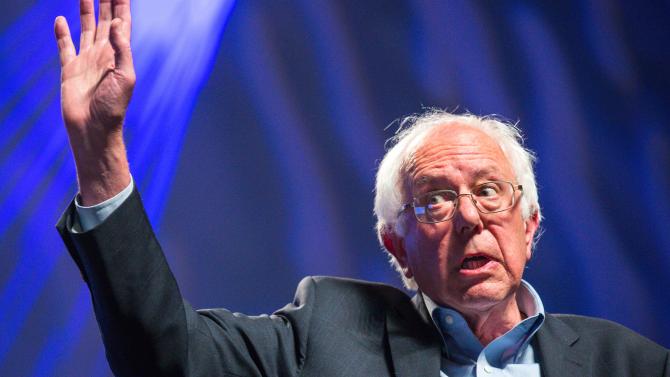 It was explained to the audience that they would be participating in a “hybrid” caucus — a merging of the traditional forms of the Republican and Democratic caucus styles. Hence, crowd members were asked both to break into preference groups, and then vote for which presidential candidate they felt would best defend the climate. “How’s that for cooperation?” one of the event organizers said.

Presidential candidates from both parties were invited to take part, but only the three Democratic candidates heeded that request, while zero GOP candidates chose to participate or send representatives. Nevertheless, organizers put up signs indicating a preference group for all the unrepresented GOP candidates — so attendees could caucus for them if they so chose.

Bernie Sanders gobbled up 67% of the vote by the time the night was over — bringing in a total of 80. Former Secretary of State Hillary Clinton finished a dismal second, tallying only 15 votes, while former Maryland Governor Martin O’Malley came in third with 13. 12 caucus-goers reportedly wound up undecided, failing to cast a vote for any of the three.

Sanders sent Jean Ross, Co-President of National Nurses United, to represent — while Clinton deployed former U.S. Senator Tom Harkin of Iowa. Harkin’s 40 years of public service in both the House and Senate made him a formidable weapon for the Clinton camp to be sure — he even received a standing ovation from the crowd when he arose to speak. But in the end, most voters weren’t buying it and went overwhelmingly with Sanders.


O’Malley’s sister Bridget Hunter made pleas to the enthusiastic crowd on the Governor’s behalf, while in between speakers, a member of the caucus read controversial climate quotes from candidates in the Republican field.

The function was sponsored and organized by the 501c4 volunteer group The Climate Mobilization. Former Iowa Congressman Ed Fallon emceed the model caucus in Central Campus High’s auditorium. Fallon is also part of The Climate Mobilization, and said in his opening remarks, “The big overriding concern is the dire situation we find ourselves in regarding climate. There’s been some good things happening. I’ve been focused on this like a laser beam the past three years, and I can tell you, things are improving — they’re heading the right way. The question is: are they going to head that way fast enough?”

The Climate Mobilization wrote in a press release following the caucus that “WWII-scale emergency action” is now necessary “to save civilization from catastrophic climate change and ecological decline.” The group calls for “net zero” greenhouse gas emissions — from the U.S. by 2025 — and globally by 2030.

The Climate Mobilization members also put forth two resolutions for attendees to take back to their individual caucuses — one addressed the Bakken Pipeline, while the other called for mass climate mobilization. Later, notepaper and a pen were passed around so people could write down ideas outlining what they felt should be additional resolutions for the caucus.

Ezra Silk, a former journalist and The Climate Mobilization’s Co-Founder, explained in detail why the meeting was labeled the “Climate Emergency Caucus” and not something else, saying, “If we really let things go completely off the wall — if we continue on the current business-as-usual mission scenarios for the next few decades, we’re looking at a mass starvation scenario — billions of people’s lives threatened. That’s what we are talking about when we say ‘climate catastrophe.’ Our government is really not responding in an adequate way, and they need to be pushed by us.”

Co-Founder Margaret Klein Salamon discussed a “tool” the group has created named the “Pledge to Mobilize,” which calls for WWII-scale action, and for signers to only support political candidates who have also signed the pledge, and embrace the WWII-climate analogy as a policy stance.

Salamon said The Climate Mobilization has succeeded in getting several state politicians and candidates to sign the pledge, but that they are yet to have a presidential candidate make the commitment. However, climate analyst John Davis, who was also advocating for Bernie Sanders at the gathering, said he would be “making a very strenuous recommendation that Bernie Sanders becomes the first Democratic candidate to take the pledge.”

Several other keynote speakers were on the scene including Jane Kleeb of Bold Nebraska — nicknamed “The Keystone Killer” by Rolling Stone Magazine.

It’s not a huge surprise that voters concerned foremost with climate and environmental issues would cast their vote for Sanders — not because he is a green-haired hippie or anything, but because of his voting record.

According to the League of Conservation Voters, Bernie Sanders has one of the greenest report cards in the entire Senate, having sided with the climate and environment 95% of the time over his career. Conversely, Hillary Clinton received heavy criticism in 2015 for coming to the dance when the dance was already over — on both the Keystone XL Pipeline and Shell Oil’s arctic drilling project — waffling around on two of the most hotly contested environmental issues of our time. Sanders on the other hand, had opposed those plans since their inceptions — a track-record that gives him the upper hand with many hardline environmentalists. Members of The Climate Mobilization and the Climate Emergency Caucus are now waiting eagerly to see if Bernie Sanders will be the first in the presidential field to sign on to the Pledge to Mobilize.