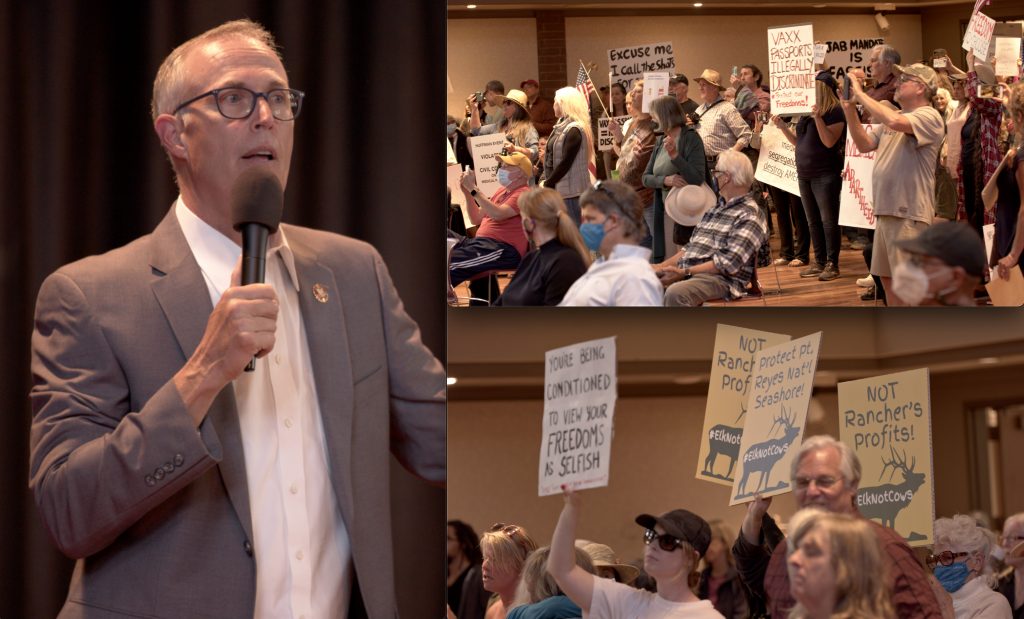 (EnviroNews DC News Bureau) — EDITORIAL: On Tuesday June 8, 2021, Representative Jared Huffman (D) of California’s 2nd Congressional District held a public town hall meeting at the Community Center in San Rafael, California. Even though producers from EnviroNews contacted Huffman’s coms team directly and requested a press pass and RSVP’d for the event on June 1 — three days before the deadline — Huffman’s aides didn’t respond until June 7, informing EnviroNews staff that we would be excluded from the town hall and that they had cherry-picked a handful of other news outlets to attend instead.

This was discriminatory and wrong of Huffman and his team and hence, local EnviroNews California showed up at the meeting anyway where producers were blocked again at the entrance by a Huffman junior aide who confirmed that EnviroNews would not be allowed to take its news camera inside the meeting. But, as local investigative reporter Peter Byrne noted in the Pacific Sun, “They allowed a cameraman from Fox News KTVU to enter, however.”

Jared Huffman’s attempt to hinder the free press and keep EnviroNews out of the town hall was unethical and also a failure; EnviroNews found a way to tape the meeting anyway, despite efforts by the Congressman’s gate trolls. All this comes on the heels of a full-feature, on-camera interview with Huffman earlier this spring, conducted by EnviroNews Editor-in-Chief Emerson Urry. That interview spanned an array of environmental topics and is currently being published as a digital series, making team Huffman’s EnviroNews ban even more blatantly deliberate. So far, about half of those segments have been released.

EnviroNews can also confirm that Huffman staffers Mary Hurrell and Jenny Callaway were complicit in this attack on journalistic rights, and helped carry out the scheme to keep EnviroNews out of the town hall. To these aides, The Editors at EnviroNews say this: If ever again you are asked by your boss to carry out unethical, unconstitutional orders, there is always another alternative: resign. On the flip-side of that coin, Representative Huffman should avoid asking his staff to carry out ploys to gag the free press.

Team Huffman’s journalism blockade was so outrageous in fact, that even colleagues from Bay Area affiliate news networks reportedly attempted to stand up for our production crew, demanding answers from Huffman’s staff as to why EnviroNews was being held out of the meeting. Huffman’s aides reportedly told those colleagues that because EnviroNews was allotted a large block of time with the Congressman in the spring that this was the reason they were denying our team access now. To that notion, the EnviroNews Editorial Board says this: that was then, this is now. Life goes on, the world moves forward, the news waits for no one and is fresh and new every day. This excuse for denying EnviroNews access to a public meeting falls flat on its face.

And it wasn’t only the media that was being hushed up at this purportedly “public” event; it was Huffman’s constituents as well. In addition to greatly limiting in-person appearance due to COVID-19, Huffman chose a format wherein questions submitted from the public were screened and filtered, before being asked by way of the Congressman’s District Director Jenny Callaway — instead of by those people themselves. This format, considered cowardly by some critics, is becoming more and more common amongst lawmakers who find themselves under fire from constituents; the method is frequently deployed in an effort to put a damper on their disgruntlement.

The Editors at EnviroNews frown on this milquetoast town hall format in general. Town hall meetings are meant to provide a time for voters’ voices to be heard — literally — not muffled, muted or interpreted through a middleman. And yes, lawmakers should expect to be shouted down now and again in these events; they should strive to grow thicker skins and they should grin, bear it and do their best to engage and explain themselves to constituents in these age-old, traditional American events. The aim should never be to make a public spectacle while attempting to put a lid on voters and the media.

But bad plans sometimes backfire quickly. Only minutes into Huffman’s meeting, the event was disrupted by an unruly crowd of MAGA-hat-wearing “vaccine freedom” people  who apparently weren’t ok with being shut out of the meeting either. “No medical tyranny,” and, “medical freedom now,” the mob chanted over and over again as they overran Huffman’s gate-guards and busted their way into the meeting.

Another group, upset with Huffman’s position advocating the continuance of cattle ranching in the nearby Point Reyes National Seashore, shouted down the Congressman as well. This groups’ outrage became more palpable after Huffman again reiterated that he’s ok with the National Park Service (NPS) shooting rare California tule elk, (Cervus canadensis nannodes) if they can’t be relocated, as part of an NPS management plan that paves the way for continued ranching in the seashore.

This certainly isn’t the first time someone has illegitimately tried to block EnviroNews from taping a public meeting; that has happened on a number of occasions before, though to date, no one has successfully stopped us. Amongst other schemes, we’ve had deep-red, corrupt county commissioners who had leased their mineral rights to industrial applicants — before voting on issues pertaining to those very same companies — attempt to blocks us in years past. But this time, the ban came from an unexpected source: from a Democratic lawmaker who touts himself as having a “100 percent” environmental voting record. If that is indeed the case, then these questions remain: why would Jared Huffman want to interfere with EnviroNews‘ coverage of his town hall? And what is he afraid of?

Moderator Tries to Control Media Taping at a Town-hall for Rep. Chris Stewart and is Stuffed By EnviroNews Utah

Center for Biological Diversity Lambasts Rep. Jared Huffman in Scathing Rebuke over Tule Elk Comments in Letter to The Editors

(EnviroNews California) – LETTER TO THE EDITORS: [EDITOR’S NOTE: This letter to The Editors at EnviroNews is authored by Jeff Miller, Senior Conservation Advocate at the Center for Biological Diversity and former resident of Inverness, California, which sits adjacent to the Point Reyes National Seashore. The letter comes in response…

Fmr. Petaluma Councilman Calls out Rep. Jared Huffman at Tule Elk Fence Protest: ‘He is wrong on this… He needs to change his position’

(EnviroNews California) – Point Reyes National Seashore, Marin County, California – Representative Jared Huffman (D) of California’s 2nd Congressional District is considered to be one of the most eco-friendly lawmakers in the House with a 98 percent environmental voting record, according to the League of Conservation Voters. He’s…