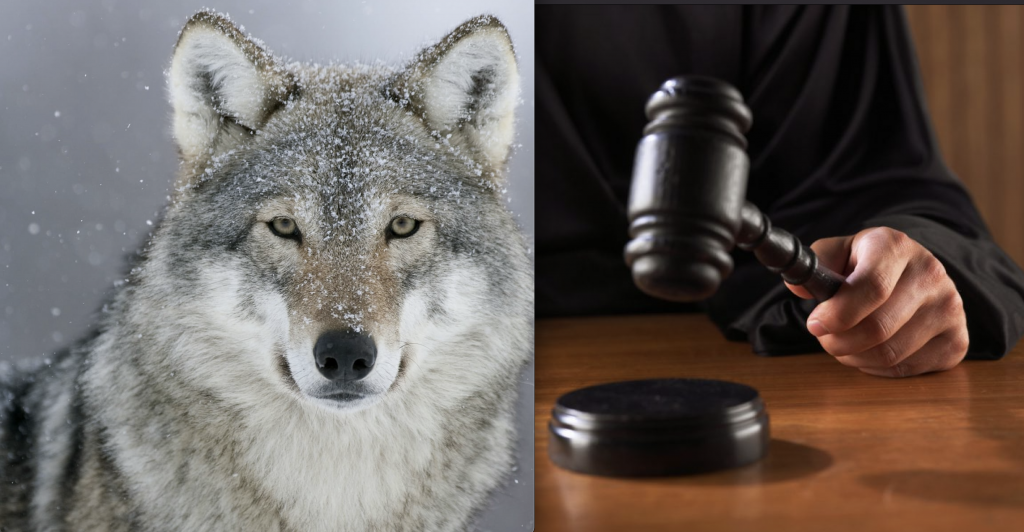 (EnviroNews Nature) — On Jan. 14, 2021, a coalition of nine conservation organizations represented by the Western Environmental Law Center (WELC) filed a lawsuit against the U.S. Fish and Wildlife Service (USFWS) for its decision to “prematurely” strip the gray wolf (Canis lupus) of protection under the Endangered Species Act (ESA) in the Lower 48 states. The groups are challenging the USFWS’ assertion that wolves are recovered in the Great Lakes region and thus, do not need protection in other areas.

Gray wolves occupy a fraction of their historical habitat with 108 in Washington, 158 in Oregon, and 15 individuals in California. Other states, including Nevada, Utah, and Colorado – once strongholds for the animal — have a functional population of zero despite the few wolf sightings they have registered.

In states where the wolf has already been delisted, the consequences have been dire. Between July 1, 2019 to June 30, 2020 in Idaho, 570 wolves and pups had been killed according to Idaho Press. In July 2020, Wyoming’s wolf population was estimated at 343; then-Governor Matt Mead and former Interior Secretary Ken Salazar agreed to a “shoot-on-sight” management program for the state’s wolves that was similar to the one reported by EnviroNews in March 2017. When Montana opened up a six-month hunting season in 2014, the wolf population declined by 12 percent. The Spokesman-Review reported that 206 wolves were killed during the winter harvest. In 2019, Montana had a wolf population of about 830.

“Wolves are a keystone species whose presence on landscapes regulates animal populations and improves ecosystem health – something the Service has acknowledged for at least 44 years,” said Kelly Nokes, an attorney with WELC. “Allowing people to kill wolves in Idaho, Wyoming, and Montana has already stunted recovery in those states. Applying this same death sentence to wolves throughout the contiguous U.S. would nationalize these negative effects, with potentially catastrophic ripple effects on ecosystems where wolves have yet to fully recover.”

Conservationists say that while the USFWS cites the recovery of wolves in the Great Lakes region, it has ignored the lack of recovery in other states. They allege the Trump Administration has ignored the science in favor of a political agenda.

As reported by EnviroNews, Trump’s USFWS delisted the gray wolf on Oct. 20, 2020 in what environmentalists called “a last-ditch ploy for Midwest votes.” The move was applauded by farmers, ranchers, and livestock-dependent businesses.

“With this ruling, management of the gray wolf is now in the hands of state officials who can best manage the population to benefit beef and livestock producers, as well as gray wolf habitat in our state,” said Minnesota State Cattlemen’s Association President Mike Landuyt in a USFWS press release at the time.

But environmentalists fervently disagree and say states are incapable of managing the wolves – especially pro-industry red states. In a press release, Lindsay Larris, Wildlife Program Director at WildEarth Guardians, points to how states have managed the gray wolf in the past and how they’re proposing to do it now:

We have seen what happens when ‘management’ of wolves is returned to hostile state wildlife agencies disinterested in maintaining robust, stable, and genetically diverse wolf populations. Idaho, which allows an individual to kill up to 30 wolves annually, saw the slaughter of nearly 600 wolves and wolf pups in a recent 12-month period, and now other states are gearing up to allow wolf hunting and trapping this fall. Returning this type of unscientific and barbaric ‘management’ to states at this early juncture would spell disaster for true gray wolf recovery, plain and simple.

Eighty-five percent of wolves we know were killed in Washington were in the Kettle River Range where [the] gray wolf was delisted from the Endangered Species Act in 2009, though it remained state listed [as] endangered. Had it remained ESA listed, entire wolf families would not have been repeatedly killed in northeast Washington. Regionally, this has meant wolves are not dispersing to Mount Rainier and Olympia National Park, or other public lands in the Pacific Northwest.

Before EnviroNews could get this article on the wire, a second lawsuit came down from another prominent team of environmental groups, including Defenders of Wildlife, the Center for Biological Diversity, Sierra Club, National Parks Conservation Association, Oregon Wild and the Humane Society of the United States. Those NGOs are represented by Earthjustice, and their suit accuses the USFWS of ignoring science in direct opposition to the requirements of the ESA.

“This is no ‘Mission Accomplished’ moment for wolf recovery,” said Kristen Boyles, Earthjustice attorney. “Wolves are only starting to get a toehold in places like Northern California and the Pacific Northwest, and wolves need federal protection to explore habitat in the Southern Rockies and the Northeast. This delisting decision is what happens when bad science drives bad policy.”