Where Does Nominee Neil Gorsuch Stand on the Environment? Why Many Greens Are Worried - EnviroNews | The Environmental News Specialists
Skip to content 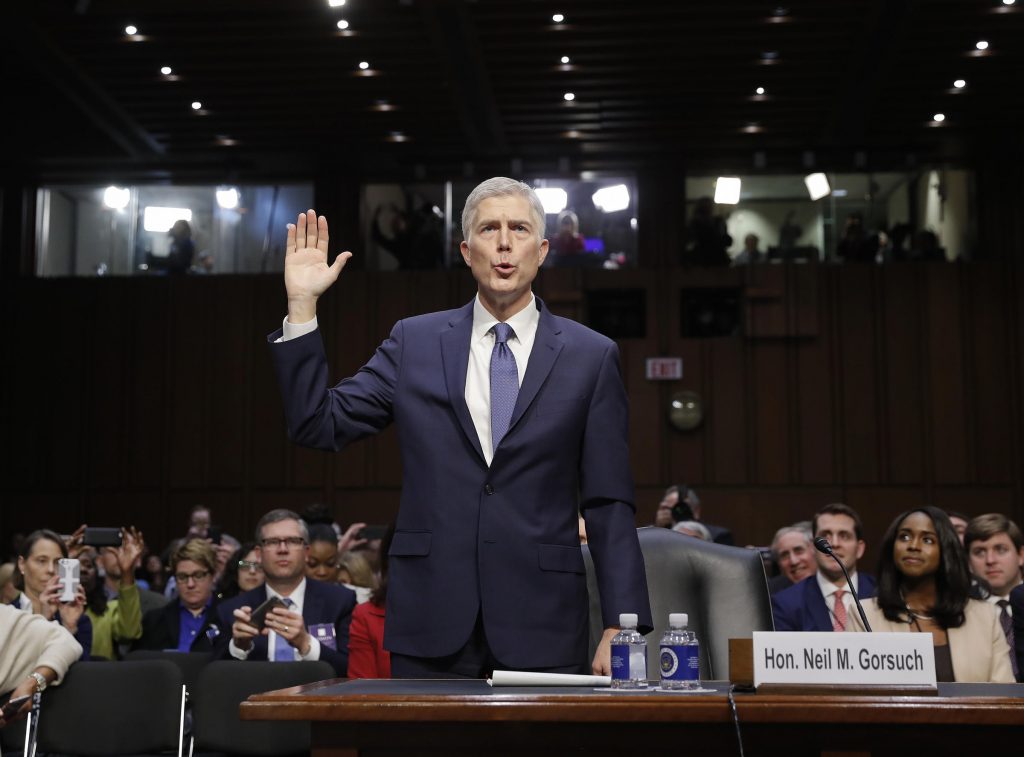 (EnviroNews DC News Bureau) — Washington D.C. — Trump’s Supreme Court nominee, 10th Circuit Court of Appeals Judge Neil Gorsuch, is a conservative judge who environmentalists fear will put up roadblocks to their legal standing. These fears are based on some of Gorsuch’s previous rulings, which have disempowered green groups. At the same time, EnviroNews research uncovered instances where he has ruled against big polluters in the past. Gorsuch is undergoing confirmation hearings this week. So, should environmentalists be concerned?

Interestingly, Gorsuch’s mother, the late Anne Gorsuch Burford, was a head of the Environmental Protection Agency (EPA) under Reagan. She is remembered for making drastic cuts to the EPA, reducing the number of lawsuits against polluters and gutting the agency’s staff. She resigned in 1983 after a short 22-month tenure. A year later, the Chevron Deference was established in Chevron U.S.A., Inc. v. Natural Resources Defense Council, Inc., in which “the Supreme Court held that courts should defer to agency interpretations of such statutes unless they are unreasonable,” according to Cornell University Law School. This set a precedent that government agencies, like the EPA, could interpret laws for the courts in some cases.

Like his mother, Gorsuch opposes the concentration of federal government influence and wrote an opinion against the Chevron Deference, characterizing it as a threat to the balance of power. Rebecca Leber of Mother Jones points out this ruling was essential to the EPA’s successful defense of the Cross-State Air Pollution Rule in 2014.

Another big concern for environmentalists is that Gorsuch will undermine or formally delegitimize their standing in court. “Standing” is the plaintiff’s right to bring suit based on a requirement that they “have sustained or will sustain direct injury or harm and that this harm is redressable,” Cornell Law explains.

In 2015, Gorsuch dismissed a case in which Backcountry Hunters and Anglers (Backcountry) sued the U.S. Forest Service (USFS) for temporarily allowing motorcycles to ride on trails in San Juan National Forest. Gorsuch wrote Backcountry did not have standing because if this trail management plan was removed, an even more lenient plan from the 90s would be reinstated, and “the group [hadn’t] offered a timely argument how that turn of events might help its members.”

Senior Attorney Denise Grab of the New York University School of Law’s Institute for Policy Integrity told Ecosystem Marketplace one potentially useful legal approach in this situation that neither Gorsuch nor Backcountry brought up is called “remand without vacatur.” With this option, the current order would have stayed in place while the USFS developed a stricter rule.

“Given his reluctance to engage on the merits in these cases when they can be avoided on procedural grounds, it seems as though he is unlikely to be viewed as a champion of environmental protection by advocacy groups,” Grab said of Gorsuch. She also points out “that he may take positions that could be consistent with environmental protections depending on which governmental actors are instituting environmental rules and how they go about doing so.”

An example of Gorsuch taking a pro-environmental stance was in Cook et al. vs. Rockwell International, a case regarding environmental contamination from the Rocky Flats nuclear weapons plant in Colorado. This case dragged on for a quarter-century before Gorsuch ruled against Dow Chemical and Rockwell International in 2015 and reinstated a $920 million jury verdict on behalf of the plaintiffs, who owned property near Rocky Flats. While being questioned by Senator Patrick Leahy (D-VT) during his confirmation hearing Tuesday, Gorsuch brought up the Rocky Flats lawsuit as evidence of his commitment to public health and the environment, and said that sadly, after 25-years, it is now often the children of the deceased plantiffs who receive the payments.

In 2011, Gorsuch expressed his appreciation for the great outdoors when he began an opinion with these words: “everyone enjoys a trip to the mountains in the summertime.” In this case, Scherer v. U.S. Forest Service, Gorsuch was on a panel that found the USFS could charge an amenity fee to visitors driving up to the summit of Mount Evans because USFS maintains a nature center there among other amenities.

Gorsuch has ruled against conservationists and other green groups’ rights to intervene in and join cases in order to help defend environmental regulations. For example, in New Mexico Off-Highway Vehicle Alliance v. USFS in 2013, he argued the Center for Biological Diversity, the Sierra Club and WildEarth Guardians could not join a suit regarding where vehicles could travel in the Santa Fe National Forest. He wrote, “it is impossible for a government agency to protect both the public’s interests and the would-be intervenor’s private interests.”

“If Judge Gorsuch is confirmed as a Supreme Court justice it would strike a blow at participatory democracy by limiting the ability of public interest groups to have our day in court and offer a perspective independent of and different from the government,” John Horning, Executive Director of WildEarth Guardians, told EnviroNews.

“Access to the law is the only way we can defend legal principles and Judge Gorsuch has sought to deny that access countless times, including in a case that WildEarth Guardians brought before the Tenth Circuit. My greatest concern is that the power of corporations and government will continue to grow under a court influenced by Gorsuch’s jurisprudence,” Horner continued.

Sierra Club Managing Attorney Joshua Stebbins told Mother Jones the 2013 case is particularly concerning as Obama-era environmental regulations come under the purview of the Trump Administration. If the current administration fails to uphold these regulations, he feels “it would become very important for the public interest community and the public health community to intervene in that lawsuit to make sure the Obama-era safeguards were being defended.”

“Neil Gorsuch is a pitch-perfect President Trump nominee for the Supreme Court – a carbon-copy of Scalia who is both radical and dangerous,” League of Conservation Voters Senior Vice President of Government Affairs Tiernan Sittenfeld told Ecosystem Marketplace. Scalia is known for stating environmentalists “did not demonstrate that they suffered an injury,” in his opinion for Lujan v. Defenders of Wildlife, regarding whether the Endangered Species Act could be applied outside of the U.S. (the Supreme Court found it could not).

As Gorsuch’s hearings continue, the country waits to see if Democrats will filibuster, and if in that case the Republican Party will choose the “nuclear option” to rewrite the Senate’s confirmation procedure and confirm Gorsuch with only 51 of the 60 required votes.