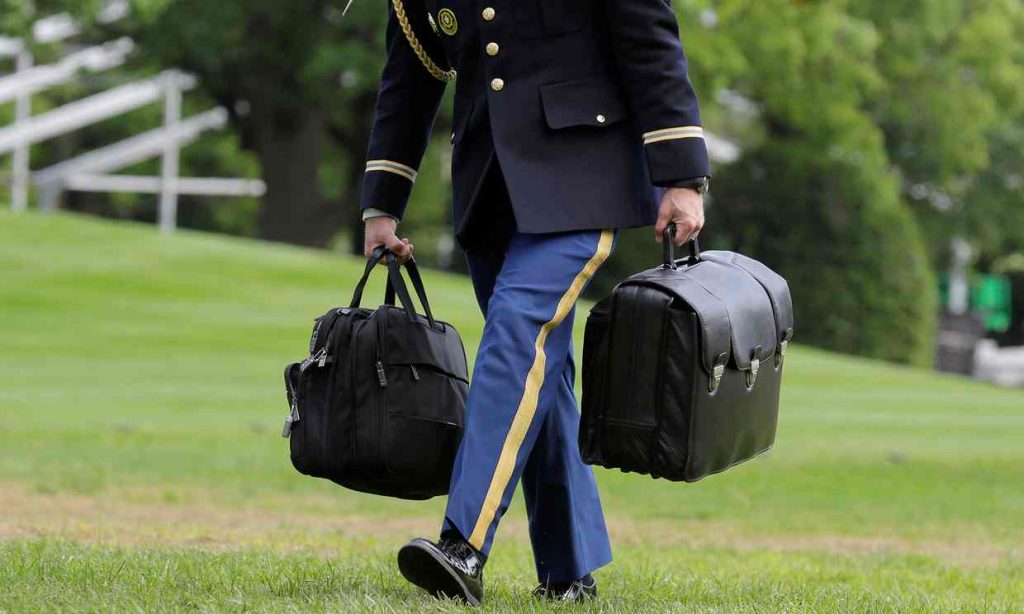 (EnviroNews DC News Bureau) — A man with a black briefcase attached to his hand by a cord shadows the President of the United States (POTUS) whenever he leaves the White House. Much like the center on an offensive line, this military officer holds the “nuclear football,” until he hikes it to the president – should he ever need to use it.

The “football” happens to be a leather, aluminum-framed bag that weighs about 44 pounds. It is made by Utah-based Zero Halliburton and is officially known as the “president’s emergency satchel” — and thankfully, no president has ever had to use it. Russia also has the Chemodanchik, or “Little Briefcase,” that follows its president everywhere – yet, no Russian leader has ever had to use it. But many people are terrified that President-elect Donald Trump is just crazy enough, or stupid enough, to call the play that could end life on Earth as we know it.

When pressed about the use of nukes by Chris Matthews of MSNBC in a town hall last March, the then candidate fired back with, “Somebody hits us within Isis, you wouldn’t fight back with a nuke?”

“Look, nuclear should be off the table. But would there be a time when it could be used, possibly, possibly?” Trump continued in the town hall.

There are three footballs in play in the United States. One shadows the president everywhere he goes, the other follows the vice president and the third is in storage in the White House. The purpose of the football is to allow POTUS to identify himself and eliminate the possibility of an impostor making the call to use nuclear arms. Five officers share the continuous rotating duty of handing off the heavy bag, and carrying it time and time again.

According to former White House Military Office Director Bill Gulley’s Breaking Cover, the football carried 4 items – at least it did in the 1980s: “The Black Book containing the retaliatory options, a book listing classified site locations, a manila folder with eight or 10 pages stapled together giving a description of procedures for the Emergency Broadcast System, and a three-by-five inch card with authentication codes.” There is also a way for the president to communicate with the Pentagon in order to wage a strike.

The nuclear football was first put into effect by President John F. Kennedy after the Cuban Missile Crisis when he became concerned about how officers in the Pentagon would verify his instructions if he were ordering a strike from a remote location. “What would I say to the Joint War Room to launch an immediate nuclear strike? How would the person who received my instructions verify them?” Kennedy said.

A decommissioned example of the bag sits in the Smithsonian to represent “the incredible military power and responsibilities of the president,” according to curator Harry Rubenstein. The nuclear football is only part of the system POTUS would use to initiate an atomic strike. He also carries a credit card size list of codes known as the “nuclear biscuit.” (These codes have been lost, or misplaced, by both Jimmy Carter and Bill Clinton.) These critical authentication codes are necessary for the president to be able to prove his identity.

Is Trump crazy enough to use nuclear weapons? Does he understand the consequences of those actions if he chooses to be the president that initiates the “first strike policy?” Trump’s words, though lost in rhetoric they may be, certainly show that he understands what would happen were he to use nuclear weapons: “It’s over.” Nevertheless, Trump made statements along the campaign trail that caused concern in Democrats and Republicans alike. “If we have them, why can’t we use them?” the candidate has said on the record.

In 1983, at the height of the Cold War, Samantha Smith, who was 10-years old at the time, was afraid there would be nuclear war between the Soviet Union and the United States. This fear came about because of the representations of the then, new Soviet president Yuri Andropov, who had crushed the Prague Spring and had been head of the KGB. Smith’s mother encouraged her to write a letter, excerpts of which were published in the Soviet newspaper “Pravda,” to Andropov. “Are you going to vote to have a war or not? If you aren’t please tell me how you are going to help to not have a war,” the child stated in her letter. When the Soviet president responded, Smith became an international celebrity.

• Her seemingly innocent question came out of a sense of fear.
• She wasn’t afraid to communicate with a man the media had portrayed as a warmonger.

Many Americans are in a similar place right now. They are afraid of what Trump might do as a president while running with the nuclear football. Riots in big cities like Portland, OR and San Jose, CA are expressions of that fear as well as other emotions. But maybe, if people can take the time to sit down with those who supported Trump’s policies, and not necessarily his rhetoric, and communicate those fears, people could become less afraid of what Trump may do as president.

“I would like everybody to end it [nuclear arms], just get rid of it, but I would certainly not do first strike. I think that once the nuclear alternative happens, it’s over,” Trump said in the first debate. “At the same, time we have to be prepared. I can’t take anything off the table.”

OTHER GREAT NUCLEAR STORIES BY ENVIRONEWS

(EnviroNews World News) – Chornobyl, Ukraine – As the 30-year anniversary of the catastrophic nuclear meltdown at Chernobyl rapidly approaches, the site still remains a huge threat to Ukraine and bordering Belarus, but also to the planet at large, though many people remain very unaware of that ominous…