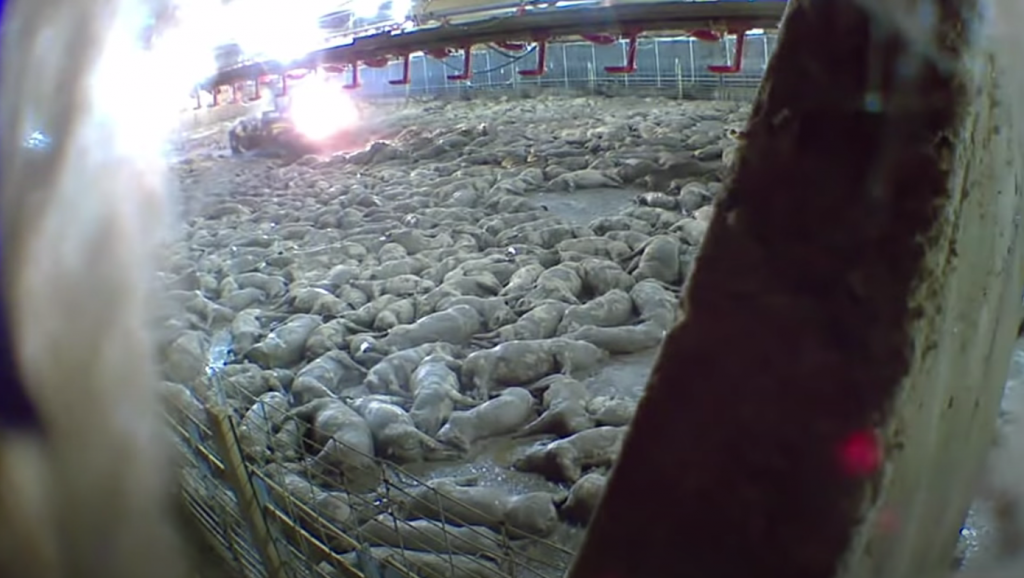 (EnviroNews USA Headline News Desk) — Grundy County, Iowa — “They have it all sealed off, insulated, and they’re pumping in steam from the machine outside. And they are going to roast the pigs alive in this sauna.” Those were the words coming from an investigator in a video produced by The Intercept, flowing underneath graphically morbid video clips from a pig slaughterhouse in Iowa, amidst America’s ongoing COVID-19 crisis.

On May 28, 2020, the animal rights group Direct Action Everywhere (DxE) released a ghastly video showing pigs being executed en masse, by an extraordinarily cruel method, leaving animal rights activists and citizens alike with feelings of outrage and disgust. The largest pork producer in Iowa, Iowa Select Farms (ISF), slaughtered thousands of pigs by way of a method many are calling “inhumane”: a technique known as “ventilation shutdown” (VSD).

The whistleblower told The Intercept:

The video, made possible by slaughterhouse whistleblowers, was shot secretly at the ISF Grundy County facility. It is not for the faint of heart. DxE says the pigs “shrieked in agony” as they were roasted alive. After two to three hours had elapsed, employees with bolt guns returned to kill any animals that had survived the process.

Because restaurants and schools shuttered amidst the COVID-19 crisis in April and early May, U.S. consumer demand for meat has fallen. Making matters worse, the meatpacking industry has been hit hard by coronavirus infections. Meat processors and slaughterhouses no longer have enough employees to turn all their animals into food, and farmers and processing plants have too many animals to care for because of the delay in processing time, according to the Journal of the American Veterinarian Medical Association.

The whistleblower added this to The Intercept:

Employee shutdowns caused massive backup. No places to put these pigs. Early talks kind of scared me about massive pig kill-offs of healthy pigs. Pigs that now are being killed for no reason. And the method to do that was through ventilation shutdown. Shut the pit pans off, shut the ventilation fans off, and heat up the building.

According to the American Association of Swine Veterinarians (AASV), the procedure involves herding the animals into a building where all of the vents are closed and the fans are shutdown. The temperature and moisture in the building will naturally rise due to the pigs’ body temperature and respiration. The animals will then suffer from hyperthermia and die. If the process goes as planned, 95 percent of the hogs will die “in less than an hour.” Backup euthanasia techniques are then used for any specimens that survive the process. VSD Plus is a technique where carbon dioxide and other heat sources are added with the aim of increasing the death rate to 100 percent.

VSD is used to prevent exposure to bloodborne pathogens or during emergencies resulting in “constrained circumstances,” which include the COVID-19 pandemic. The AASV says it requires fewer people to implement the procedure with most of the labor needed only for carcass removal. At the Grundy County plant, carcass removal was accomplished through the use of bulldozers. Regular building operation with open ventilation and running fans is restored before plant workers return.

Jeff Hansen, CEO of ISF, told The Des Moines Register the company had “exhausted every possible option” to get rid of the animals, including finding more barn space and donating pork to employees and food banks. In a press release, the company pointed the finger back at opponents saying, “animal activists chose to exploit this current tragedy in American agriculture as they infiltrated a facility used by Iowa Select Farms and proceeded to taunt, harass, and videotape our team members.”

“When we have a system that is fundamentally broken — with government reinforcing, rather than regulating, an abusive industry which only serves those at the very top — it’s left to ordinary people to take action ourselves and hold our elected officials accountable to the will of the people,” said Matt Johnson, DxE’s lead investigator. Johnson and a co-worker were charged with trespassing when they filed a complaint against ISF with the Grundy County Sheriff’s Department.

While the American Veterinarian Medical Association (AVMA) recognizes that VSD may be used in constrained circumstances, it also points out problems with the technique. If the barn where the pigs are herded is inadequate for a variety of reasons, VSD may not achieve 100 percent mortality. The AVMA even points to a United Kingdom case study where 100 percent mortality wasn’t achieved even after 16 hours, leaving hogs to suffer on in agony as they died excruciating deaths.

When Glenn Greenwald, acclaimed investigative reporter and Founder of The Intercept, asked “What are the personal and professional risks that you feel like you would face if you actually came forward on the record, in your name?” the whistleblower was quoted this way:

Coming forward would cause a lot of pain and anguish with friends and family, and it’s because this industry encompasses everything that is home. It was just I guess affecting me more and more every day — feeling the compassion and empathy with these animals. What I’ve been witnessing with these pigs being killed, it’s profit over everything.

Mercy For Animals 3 Min. Video Causing Shock and Awe Across the Internet

(EnviroNews World News) – A video published recently by the non-profit animal rights advocacy group Mercy for Animals is blowing people’s minds across the internet – including apparently, that of Hollywood megastar and environmental activist Leonardo DiCaprio. Though published in December of 2015, the video got a huge…