(EnviroNews World News) — Barrie, Ontario, Canada — On September 26, 2016, Mike MacMillan started off an atypical work day by dressing in a suit, because he was on his way to meet the mayor of the city, when he noticed something unusual and a bit disturbing: a striped skunk (Mephitis mephitis) had gotten its head stuck in a lidless coke can and was frantic in an effort to free itself — blindly scampering around the neighborhood in a plight full of fright.

MacMillan quickly began rolling cell phone video, simultaneously attempting to coax the little fella toward him so he could help remove the object. After about a minute of not knowing whether he’d be able to catch up to the scuttling skunk, he was finally able to get his free hand onto the bright red soda can.

But it wasn’t all smooth sailing from there — not at all. The poor creature’s head was snuggly stuffed into the soft drink canister, and yank as it might, its little noggin was in a knot, stuck squarely in a foreign doodad, and “Coke was it!”

Following a few tense moments where the stripy critter violently tried to shake itself loose, it finally popped free — and thank goodness it did MacMillan the favor of not spraying him, and his dress suit, from head to toe with a brew that could’ve turned him into the loneliest man in Barrie.

Fortunately for MacMillan, and his family, this Pepe Le Pew was able to recognize friend from foe, and trotted off without unleashing a potent dose of its best defense mechanism — and a noble defense it is, hailing straight from the movie Labyrinth’s “Bog of Eternal Stench” — because if you’ve ever been sprayed by a skunk, you quickly learn that the stench is not easy to get off. In fact, the team at Myth Busters put skunk spray to the test, trying to remove the malodor with multiple home remedies, of which most failed miserably. According to the show’s website, only a mixture of hydrogen peroxide, dish soap and baking soda was able to neutralize the powerful substance — a natural cocktail containing thiols — the same compound present in rotting flesh and feces. 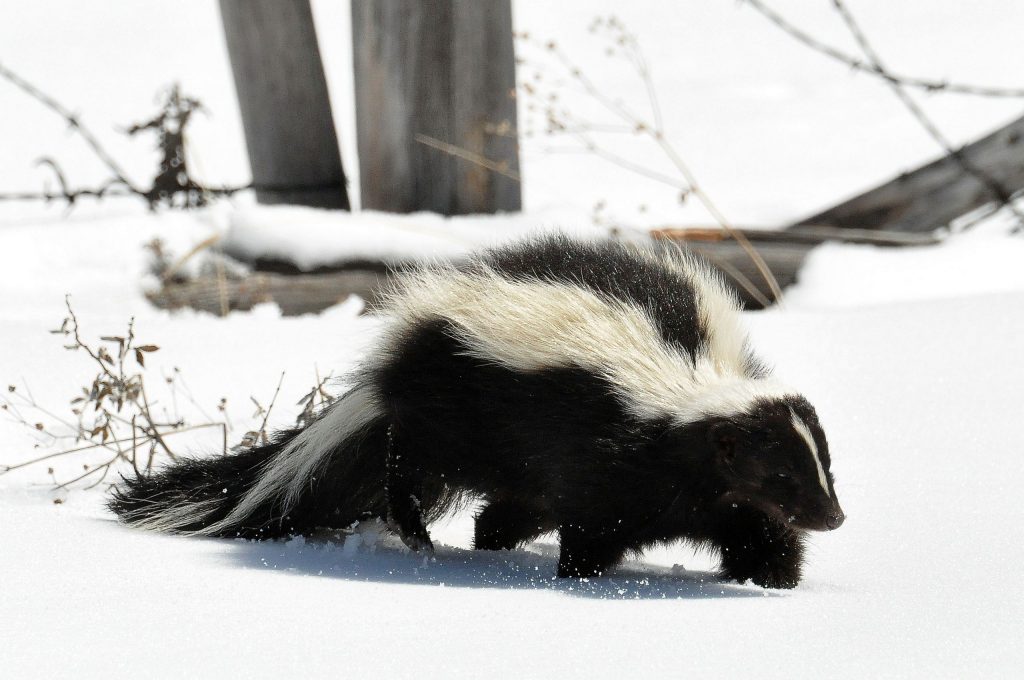 Since MacMillan’s good deed, he’s now being called “The Skunk Whisperer,” and has been asked to appear on multiple news shows to describe the events of his encounter.

Kelly Cutrara — Toronto Talk Radio (AM 640): Confirm or deny: He had his posterior facing you at least 20 times.

MacMillan: Oh yeah. I was in the danger zone many many times (laughs).

Cutrara: You are basically playing tug-of-war with a skunk. You’ve got one end of the Coke can — he is at the other end — and you’re just both pulling back and forth.

MacMillan: Well, I’ve got to say. You can feel it. It’s kind of a tangible thing. The animal was working with me. As soon as I got that can, it was cooperating. We weren’t fighting against each other. I could somehow tell that the animal was working with me. I could kind of feel that the whole way along. It doesn’t mean I was’t going to get sprayed, but still, I just kind of had this cool feeling. It was neat.

Cutrara: Would you argue with the fact that you may be the world’s first skunk whisperer?

MacMillan: I will wear that moniker with pride.

Radio Host at 107.5 KOOLFM: In the event that maybe you had to take some evasive action wouldn’t you want like two hands free?

MacMillan: That’s a good point. I sacrificed the hand I should have been covering my face with for the camera. I figured for sure I was going to get sprayed, so I wanted to have something for posterity I guess — something I could show my wife and kids and say, “this is the dumbest day of my life.” (laughs)

The mayor whom he was going to see, Jeff Lehman, has been described as a “social media guru,” and according to MacMillan, upon seeing the video of the ordeal MacMillan had been through on the way to meet him, said the video was “social media gold.” It turns out the Mayor was right. Thus far, the video has accrued over 20 million views on Facebook, and the hits just keep rolling in.

Cutrara: I guess one of the questions that everybody’s wondering here is: did you get to your meeting with the mayor?

MacMillan: I did. He was the first one to see the video, and he was just amazed. He’s like, “You’ve got to put that on YouTube. That’s just incredible. I’ve never seen anything like it.” So, Jeff Lehman, he was really impressed.

Cutrara: Had you got sprayed by that skunk, would you have still gone to the meeting?

MacMillan: No way. I wouldn’t have gone.

You may watch the video for yourself in the video player just below.

Although this video is cute and tugs at your heartstrings with a happy ending, sadly, creatures of the air, forest and sea are forced to wrestle with strange plastic and metal objects everyday — gadgets that are not at all part of their evolutionary programming or DNA.

A prime example of this can be seen in two separate EnviroNews World News stories where the same group of researchers, on two separate occasions, were compelled to pull plastic food-industry utensils from the nostrils of ancient, and long-lived sea turtles in crisis. But what would have happened if these researchers weren’t there to help those turtles? What would have happened if MacMillan wasn’t there to help the skunk? And how many unsuspecting creatures are meeting their demise every day on this planet at the end of human garbage?

You may view the dramatic sea turtle rescues in the embedded EnviroNews World News stories below, knowing these videos represent the minute fraction of stories with happy endings, when wildlife tangles with human trash.