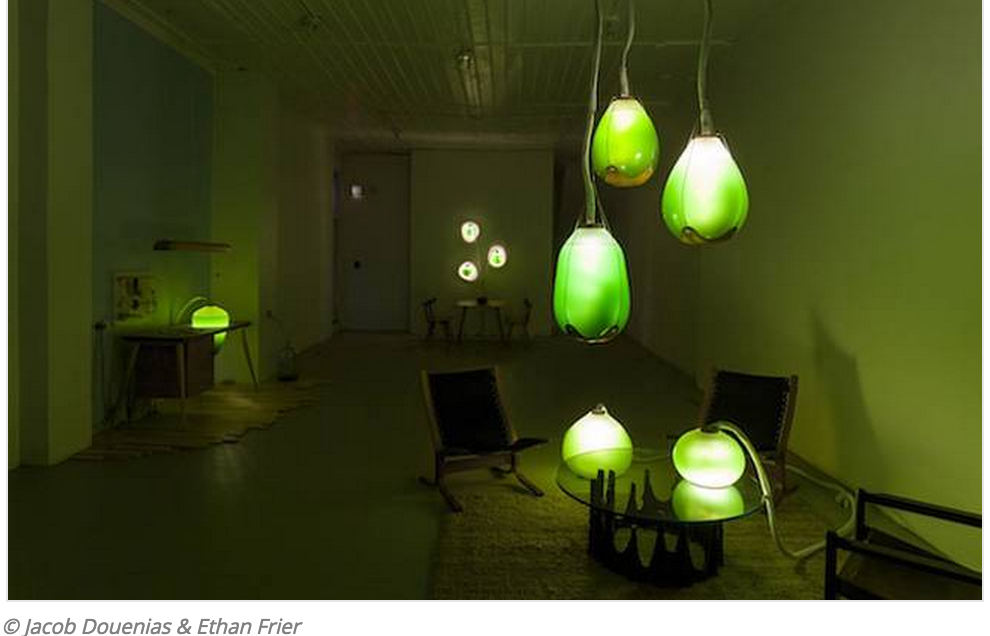 (EnviroNews World News) — Green colored lightbulbs/heating lamps that are literally alive — that’s what’s been circulating around the web recently, as Living Things, a green product exhibit, rolled out at the Mattress Factory Museum of Contemporary Art in Pittsburgh, Pennsylvania.

The unique system features a series of large bulbous light fixtures and could be retrofitted for homes someday say the designers. The fixtures are run by a control-board composed of 3D printed nylon knobs by which media is fed to the spirulina. The knobs apparently also control the harvesting of the algae when it becomes dense enough. As part of the exhibit, “the designers plan to harvest spirulina from the installation throughout the year, and will work with chefs and bartenders to create spirulina-inspired cuisine and drinks for events that will be held at the museum,” Tree Hugger reports.

Spirulina is hailed as an incredibly invigorating food carrying multiple health-boosting benefits, while up to 60 percent of its weight is measured as protein. It is believed that the plant fights high cholesterol while encouraging weight-loss and preventing cancer.

While blue-green algae may have naturally-occurring medicinal properties and is great to eat, it also makes some of the cleanest biofuel on the planet at an incredible rate of efficiency as compared to large plants like corn that are highly energy intensive to grow and harvest.

The algae lights showcased in the Living Things exhibit act as photobioreactors that allow the spirulina to thrive and grow while giving off heat and a cool blue-green illumination to the surrounding space.

The engineers behind the exhibit are a pair of Carnegie-Mellon University graduates by the names of Jacob Douenias & Ethan Frier, and although the fixtures were made out of awesomely artistic handblown glass for the Pittsburg demonstration, these two inventors feel algae devices like theirs, can in the future “have a role in our homes as lighting and furniture, producing food, fuel, heat and light,” according to Tree Hugger.