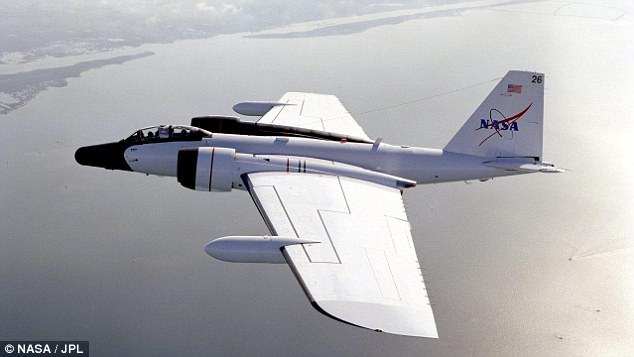 (EnviroNews Alaska) — A consortium of researchers announced this week that back on August 3, 2016, for the first time in two decades of atmospheric observations by plane, they discovered enriched uranium 235 (U-235) in the troposphere. The submicron aerosol particle, found 7 km (4.3 miles) above Alaska’s Aleutian Islands, appears to have come from Asia. And although the particle may have been small and flying solo, researchers say it is a significant discovery and may point to an undeclared release of the long-lived isotope.

“During 20 years of aircraft sampling of millions of particles in the global atmosphere, we have rarely encountered a particle with a similarly high content of [uranium 238] and never a particle with enriched [uranium 235],” the researchers wrote in their abstract. They used a high-tech, high-altitude NASA WB-57 plane to collect the samples.

Uranium 235 is used in nuclear bombs and reactors. The researchers said the particle, which contained between three and five times more U-235 than would be expected in a naturally occurring compound, was the only one found. Its small size precludes it from coming from any recent nuclear disasters like Fukushima. It is “definitely not from a natural source,” said Dan Murphy, a National Oceanic and Atmospheric Administration (NOAA) scientist and one of the paper’s authors.

Uranium is the heaviest naturally occurring element on Earth. But how these scientists know this particular particle isn’t natural is because a typical subdivision of uranium ore contains about 0.7 percent uranium 235, but this “mystery particle” contains between 2.6 and 3.6 percent. U-235 is the coveted element for bomb making and nuclear power reactors because it is one of the only elements that when split, perpetuates a sustainable nuclear chain reaction.

“Particulate matter containing uranium can originate from sources such as combustion of coals with trace uranium, windblown crustal material, and mining and processing of ores, whether it be for the uranium itself or other minerals such as rare earth [minerals] and phosphate,” the authors explained.

The process of concentrating U-235 through centrifuges or gaseous diffusion is a dirty one, and is challenging to say the least. During World War II, the U.S. Government spent colossal amounts of tax dollars to erect entire cities wielding befuddlingly large industrial complexes (like the one at Paducah, Kentucky) for this purpose, only to extract a few paltry pounds of the substance. The process of enriching U-235 remains arduous and costly today.

“It’s not a significant amount of radioactive debris by itself,” Murphy continued to Gizmodo. “But it’s the implication that there’s some very small source of uranium [out there] that we don’t understand.”

These scientists don’t know where the particle originated from but published their findings because “it may indicate a novel source where enriched uranium was dispersed.” Air patterns suggest that it could have origins “in a variety of areas across Asia.”

“We’re hoping that someone in a field that’s not intimately associated with atmospheric chemistry can say ‘a-ha!’ and give us a call,” Thomas Ryerson, one of the researchers from NOAA, told Gizmodo.

“My best guess is that the source is North Korea,” wrote nuclear energy expert Arnie Gundersen in an email to EnviroNews. “North Korea has a small reactor and does have gas centrifuges for slightly enriching uranium 235. After running the enriched uranium in the reactor, they remove the used fuel and extract plutonium 239 for their bomb program. It is possible in either creating new fuel or in extracting plutonium from fuel that has already been in their reactor, some enriched uranium escaped and went airborne,” Gundersen concluded, emphasizing that North Korea was only his best supposition. The material could have also come from nuclear programs in either China or Japan.

Scientists from NOAA ESRL Chemical Sciences Division, the University of Colorado, the Norwegian Institute for Air Research, the National Center for Atmospheric Research, and the University of California participated in the research and paper, published in the Journal of Environmental Radiation. They plan to release their full findings of the discovery in April of this year.

Radiation Cloud Over Europe, Not ‘Harmless’ to Those near Unknown Source, Nuclear Expert Says

(EnviroNews World News) – An airborne plume of radioactive ruthenium 106 from a nuclear accident was detected “in the atmosphere of the majority of European countries,” from late September through mid-October, according to France’s Radioprotection and Nuclear Safety Institute (IRSN) – but the source is still unknown. As…