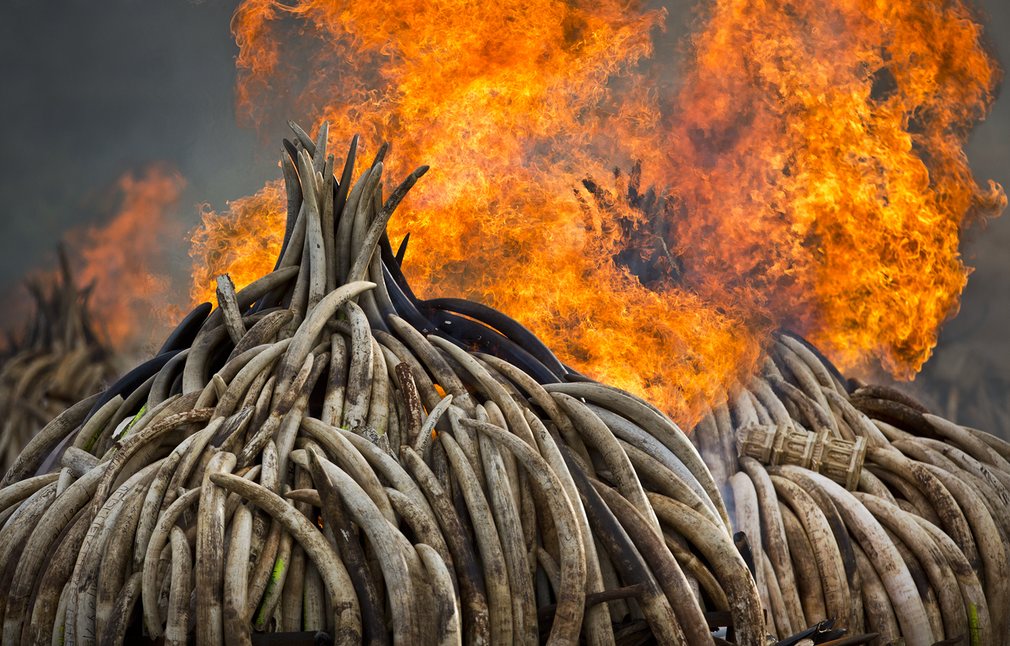 (EnviroNews World News) — Nairobi National Park, Kenya — The biggest elephant-ivory bonfire in world history went down in Nairobi National Park in Kenya on April 30, 2016. The country hosted the event in hopes of shocking the world into doing more to help protect the iconic mild-mannered creatures. The fire incinerated nearly all the country’s remaining stockpiles while inflicting a 5% dent in ivory markets worldwide.

More than 105 tons of ivory, mostly tusks from the large lumbering mammals, were set ablaze by Kenyan President Uhuru Kenyatta in ceremonious fashion, in an effort to bring more attention to the elephant’s plight, in what the leader says should be an all-hands-on-deck international fight to save the species.

11 massive pyres of tusks, from approximately 8,000 illegally slaughtered animals, were ignited, in what The Guardian reported was “seven times the size of any previous [elephant tusk] burn.” In total, the mountainous white heaps, which also contained highly prized rhino horns and carved Chinese trinkets, were estimated to be worth over $100 million USD on the black market.

Kenyatta was joined by other African leaders, military officers, wildlife officials, and members from conservation groups, and gave a press conference where he fielded questions from members of the press.

“Kenya is making a statement that for us ivory is worthless unless it is on our elephants. This will send an absolutely clear message that the trade in ivory must come to an end and our elephants must be protected. I trust that the world will join us to end the horrible suffering of our herds and save our elephants for future generations,” Kenyatta stated to a large crowd before commencing the event.

The move by Kenya’s leader was largely applauded, but not all environmentalists and conservationists thought the massive burn was a good idea. Environmental economist Mike Norton-Griffiths told Today, “I am very worried about it. I think it’s almost reckless of the Kenyans. The problem is it’s a very large burn of ivory, 5% of the global stocks of ivory, and when you take 5% of stocks out of a market like this, a resource market, something is going to happen.”

“The traders will see 5% less ivory available to be released to them. Their response will be: ‘They’re taking this seriously, they’re never going to release this ivory to us, we must go and collect more from elephants,” Norton-Griffiths continued.

Kenyatta said yesterday, “The future of the African elephant and rhino is far from secure so long as demand for their products continues to exist.”

Reports from the ground say President Kenyatta is poised to lobby for an all out international ban on ivory commerce at the Convention on International Trade in Endangered Species of Wild Fauna and Flora (CITES), scheduled for September in South Africa.

Elephant populations have been in sharp decline across Africa and around the globe, with an estimated 30,000 of the creatures chopped down annually for nothing more than their tusks. Kenya has been hit hard by poaching to be sure, but herds in some countries have been obliterated even worse.

Last year, EnviroNews World News released a feature long-read article on a bloody poaching war on the ground in Tanzania. That country was once the world’s greatest stronghold for the iconic creature, but a full frontal assault by ivory raiders there mowed 60% of that country’s massive population to the ground in less than five short years.

(EnviroNews World News) – Over 60 percent of the elephant population in Tanzania has been eradicated by poachers in five short years a new aerial census has shown. Tanzania had long been known as the “elephant capitol of the world” – but those days are now long…

MORE ON ELEPHANTS FROM ENVIRONEWS

(EnviroNews World News) – An amazing video has been circulating around Facebook raking in over 13 million views thus far. The subject: a baby elephant ramming, stomping and crunching a car like a tin can when the vehicle came onto the youngster’s turf. If you haven’t seen…

(EnviroNews California) – San Francisco, California – The ingenuity of the human spirit can be truly amazing, but this story takes that ingenuity to a whole new level. Tackling a wildlife quagmire in Sri Lanka, Dr. Karl Wald set out to find a solution that would create…