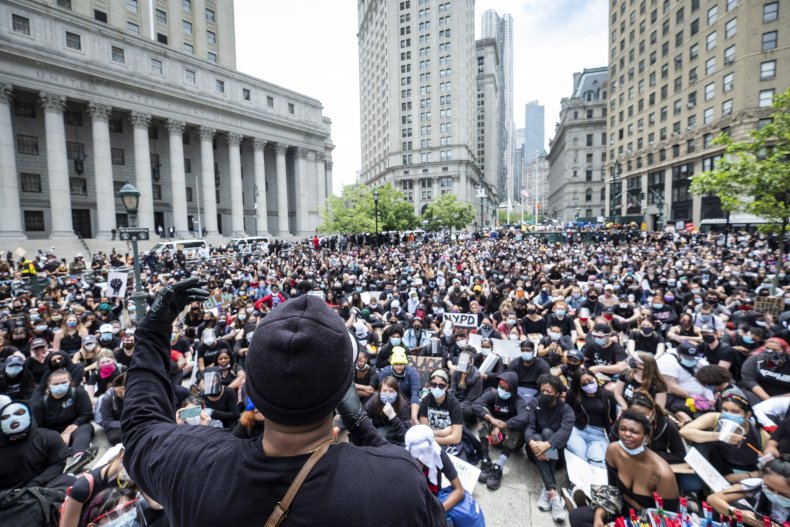 (EnviroNews DC News Bureau) — As demonstrations begin to change their focus and possibly wind down following the charges brought against the four officers involved in the killing of George Floyd, police officers and protestors face an insidious threat: COVID-19. Coronavirus is still active, and politicians and the medical and health communities are sounding the alarm on an increase in infections.

“You’ll undoubtedly see a spike in cases, and then likely hospitalizations and deaths,” Dr. Brian Moench told EnviroNews. Moench is Founder of the Utah Physicians for a Healthy Environment – a 501c3 organization harboring over 500 doctors who fight for environmental and health justice.

COVID-19 is spread through the large droplets that infected people exhale and has an incubation period of one to 14 days with people showing symptoms five days after exposure on average. Talking loudly, yelling, and singing release more viral particles into the air than other quieter activities. There is now a high likelihood that the protests, and the subsequent law enforcement response to the protests, will increase the number of cases of coronavirus infection across the U.S.

“COVID-19 has not disappeared from Chicago… We worry about thousands of people that have been out in the streets over the last few days,” Chicago Mayor Lori Lightfoot said at a press conference. “God forbid we see a spike that overwhelms our health care resources, just as we saw the light at the end of the tunnel.”

A study published in The Lancet on June 1, 2020, found that social distancing of three feet (one meter) resulted in a large reduction of infections. The researchers suggested that six feet (two meters) is even better. Wearing face masks and eye protection also helped reduce transmission of coronavirus.

“There’s a large number of people,” Brooksville Infectious Disease Specialist Dr. Vatsala Sastry told Tampa’s Spectrum Bay News 9. “They are closer together than usual. They are exposed to pepper sprays and tear gases and because of that they tend to cough more and sneeze.” Sastry reminds protesters that many people with the virus are asymptomatic and recommends those attending get a COVID test and self-quarantine for 14 days afterward.

Social distance is almost impossible to maintain during a protest, and videos have shown that countless thousands of people aren’t wearing masks or covering their eyes at all. New York Governor Andrew Cuomo (D) had this to say at a press conference:

We have a fundamental issue, which is we just spent 93 days limiting behavior, closing down, no school, no business, thousands of small businesses destroyed. People will have lost their jobs. People have wiped out their savings and now mass gatherings with thousands of people in close proximity one week before we’re going to reopen New York City? What sense does this make?

We don’t even know the consequence for the COVID virus of those mass gatherings. How many super-spreaders were in that crowd?

Cuomo was also concerned that even if the protestors were mostly young people, they could bring it back to their families. NBC Medical Correspondent Dr. John Torres raised other concerns:

These protests have unique issues and part of it is because the longer you’re around a lot of people, the more time you spend with those people, the closer you are, the more likely you are to spread coronavirus. On top of that, people here might get it and take it home, spread it somewhere else. On top of that, if there’s tear gas involve: the tearing, the coughing, the shouting, the screaming that goes on… Those respiratory droplets can go even further and contaminate more people. Your seeing people without masks at the same time, and then if people get jailed, they get indoors, which makes it even more likely their going to catch coronavirus in that environment because of the close, tight-packed area they get when they get jailed.

At least five officers were exposed to one infected protester according to Tampa Police Chief Brian Dugan, who wouldn’t release the identity of the protester according to USA Today. Bradley Pollock, Chairman of the Department of Public Health Sciences at the University of California, Davis pointed out that the merit of the cause doesn’t prevent the spread of the illness.

One positive is that these protests are outdoors, which may help put a damper on the spread of the disease. However, people should still be wearing masks and taking other precautions according to former Centers for Disease Control and Prevention (CDC) Director Tom Frieden, who also stipulated that the pandemic shouldn’t be used to assert social control.

OTHER PANDEMIC REPORTS BY ENVIRONEWS