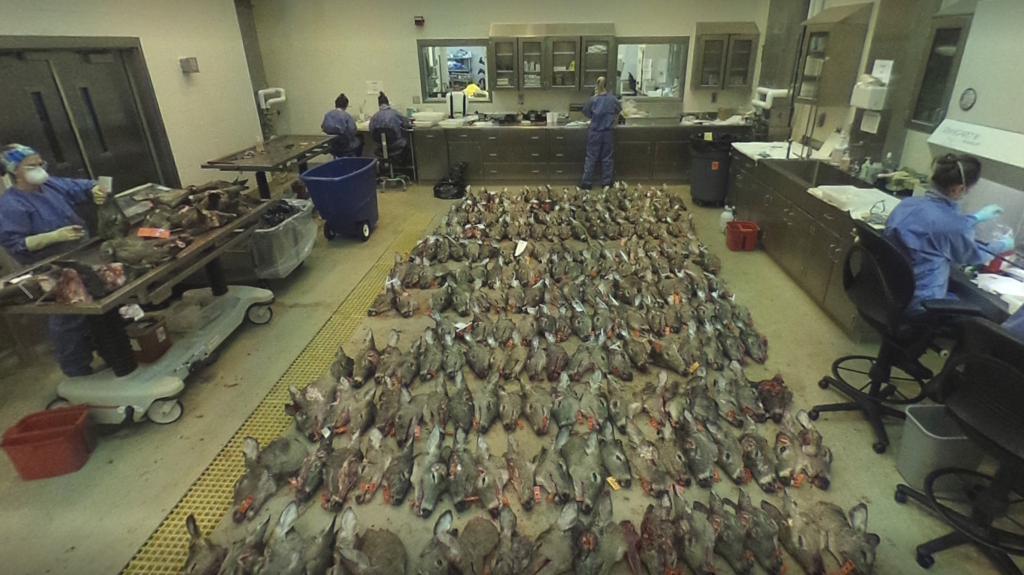 (EnviroNews DC News Bureau) — From Alaska to Florida, states are bracing for the spread of chronic wasting disease, or CWD, an incurable and inevitably fatal malady that afflicts deer, elk, moose, and caribou. It is now found in 25 states, two provinces in Canada, as well as Norway, Finland, and South Korea.

Testing of animals killed during the most recent hunting season, from fall 2017 to early winter 2018, showed CWD appearing in places it’s never been seen before. Two mule deer killed in two different locations in Montana in October 2017 tested positive for CWD, representing the first time the disease has been detected in the wild there. On January 25, 2018, a white-tailed deer found dead in Mississippi tested positive, marking the first case in that state.

Chronic wasting disease is part of a class of illnesses known as transmissible spongiform encephalopathies (TSEs), the most notorious of which is mad cow disease. To date, no humans are known to have contracted illness related to CWD, but recent research reported by EnviroNews shows that it is possible.

“The reason for those special hunts [was] solely to determine the prevalence of disease in the herds,” said John Vore, Game Management Bureau Chief with Montana Fish, Wildlife and Parks. Eight additional animals near Bridger tested positive, but results are still coming in.

The sudden appearance of the disease in Montana prompted neighboring states Oregon and Washington, which are still officially CWD-free, to prohibit bringing animals or animal parts from the Big Sky state. It also led to a brouhaha with Wyoming — a state which has lost 19 percent of its mule deer in one herd, while suffering a 10 percent annual decline from 2003 to 2010 of a white-tailed deer herd to CWD.

Montana’s Fish and Wildlife Commission asked Wyoming to stop feeding elk in the wintertime. In a December 7, 2017 letter to his counterpart at the Wyoming Game and Fish Commission, Chairman Dan Vermillion wrote, “As westerners, we all intimately understand that feeding wildlife is a mistake and ultimately harms the very wildlife we all cherish.” Vore said the letter has prompted conversations in both states. He added, “Anytime where you artificially congregate animals like that it’s just a breeding ground for not only CWD but all kinds of diseases.”

Wyoming began elk feeding unusually early last year, and the state resumed wolf hunting after the Trump Administration removed the species from protection under the Endangered Species Act on April 25, 2017. Despite the Wyoming Game and Fish Commission’s own 2016 presentation that reads, “Modeling suggests selective wolf predation may decrease CWD prevalence,” the state allowed the killing of 76 wolves out of a population of only 380.

Michigan found itself with so many deer heads to test during the 2017 hunting season that they were lined up on a laboratory floor like a spooky animal factory waiting for bodies. As the disease spread north in the state, test results were delayed due to a nationwide shortage of CWD testing kits.

In Wisconsin, another hotspot for chronic wasting disease, testing declined from 30,271 animals in 2006 to just 9,685 in 2017 – even though the number of infected deer has risen, with positives jumping from 205 to 593 during this period. Local journalist Ron Seely told Wisconsin Public Television, “The [Department of Natural Resources] isn’t collecting enough data in a scientific way.” Meanwhile, CWD has just spread to Milwaukee County, home to almost one million people.

2017 saw the spread of chronic wasting disease in many states. Positive tests for CWD in Pennsylvania deer doubled while Lancaster County saw its first recorded infection. In Arkansas, 70 new cases of CWD were found and the disease spread to three new counties. The first case of CWD in southern Iowa was confirmed, while Nebraska found chronic wasting disease in five new counties. In South Dakota’s Wind Cave National Park, a 2017 research study found 24 percent of deer in the eastern area of the park are infected, while six percent in the western section are carriers.

Unfortunately, it’s not only the U.S. that is experiencing an increase in CWD. In Saskatchewan, Canada, testing found at least one area where 43 percent of the herd was afflicted with CWD. A 15-year old moose was found dead of chronic wasting disease in Finland, the first-ever case in that country.

The disease spreads among animals, both captive and wild, as prions are shed through feces, saliva, urine or blood. These prions can persist in the environment for very long periods of time, where healthy animals can pick up the disease from plants or soil. Studies have shown that CWD prions remain infectious in pastures for at least two years, while prions from scrapie, a related prion disease affecting sheep, remain active up to 16 years.

“The natural environment is a reservoir for prions that cause chronic wasting disease,” states a new study published December 22, 2017, in Scientific Reports. Researchers from the University of Illinois found a connection between the clay content of soil and its ability to hold onto and immobilize CWD prions. Soil acidity was also a factor. Where the soil is less than 18 percent clay and pH is greater than 6.6, the disease spreads more readily. A pH value of 7 is neutral; values below that indicate acidity, and levels above 7 are considered alkaline. The data could prove valuable to wildlife managers in the future.

The relentless spread of CWD has recently garnered the attention of federal legislators. A bipartisan bill, H.R. 4454, introduced in the House of Representatives by Rep. Ron Kind (D-WI) and Rep. Jim Sensenbrenner (R-WI), would authorize $35 million for the implementation of CWD management strategies by state and tribal wildlife and agriculture agencies. A similar Senate bill, S.2252, introduced by Montana Sen. Jon Tester (D), would allocate $60 million.

“In Montana, hunting is a part of our way of life because it helps provide our families with food, manage our wildlife, and sustain rural economies,” Tester said in a statement. “It is critically important that we stop the spread of chronic wasting disease before it diminishes our big-game herds and undercuts our outdoor economy.”

Vore told EnviroNews that additional resources “would help Montana a lot” but added that he is concerned about the long term. Right now, he said that CWD is top-of-mind in the state, with residents and hunters understanding the threat, but he’s seen other states where people lose interest after a time. “We need to keep CWD management on people’s minds.”

Chronic wasting disease “presents greater challenges than anything we’ve ever seen,” said Darrel Rowledge, Director of the Alliance for Public Wildlife. It’s an issue that goes beyond the hunting and wildlife community. It has the potential to infect humans and there are emerging concerns about its potential impact on agriculture.

With chronic wasting disease moving relentlessly across state lines, even areas far from current infections may not be safe. The nearest infected area to Alaska is in Alberta, Canada, but the state’s chief veterinarian, Dr. Bob Gerlach, is sounding the alarm. And with Mississippi now showing CWD-infected deer, Florida is warning hunters to be on the lookout.

Dunfee, who is a conservation biologist and a hunter, sees the growing involvement of organizations such as the National Wildlife Federation, which supports Tester’s bill, as good news for improved public awareness and political action. “I’m passionate about our wildlife resources, and I want to see better, more science-based management techniques for CWD.”

OTHER REPORTS ON PRION DISEASE BY ENVIRONEWS:

(EnviroNews Utah) – PRION: a word that many have never even heard before, but little do they know that this deadly and virulent “pest” may be lurking right on their dinner plate, or inside their cute little pets Fluffy and Rover, or even right in dear ol’ Gramma’s…

Dr. Tyler Yeates MD Calls Out Stericycle For Incinerating Deadly Brain-Attacking Prions Into the Environment – Stericycle Owns Up to it

(EnviroNews Utah) – North Salt Lake City – In a shocking admission Thursday night at a heated town hall meeting, a VP from Stericycle has admitted that the company is allowed to accept and burn deadly and arguably indestructible brain-destroying prions at its North Salt Lake incineration facility…

(EnviroNews Utah) – Following Stericycle’s simply flabbergasting admission last Thursday night where they acknowledged that they are allowed to accept and burn deadly and largely indestructible prions, protestors took to the streets outside one of the country’s last standing hazardous medical waste incineration plants. Prions are the malformed…

Amy Uchida, 4th Year Medical Student at the U of U, is Asked About Stericycle’s Incineration of Deadly Prions

(EnviroNews Utah) – According to documents on the Department of Environmental Quality website, Stericycle’s permit needs to be renewed by August 19, 2013. The company’s current permit expires on Feb. 19, 2014. Regg Olsen is listed as the contact at the Department of Air Quality (DAQ) in charge…