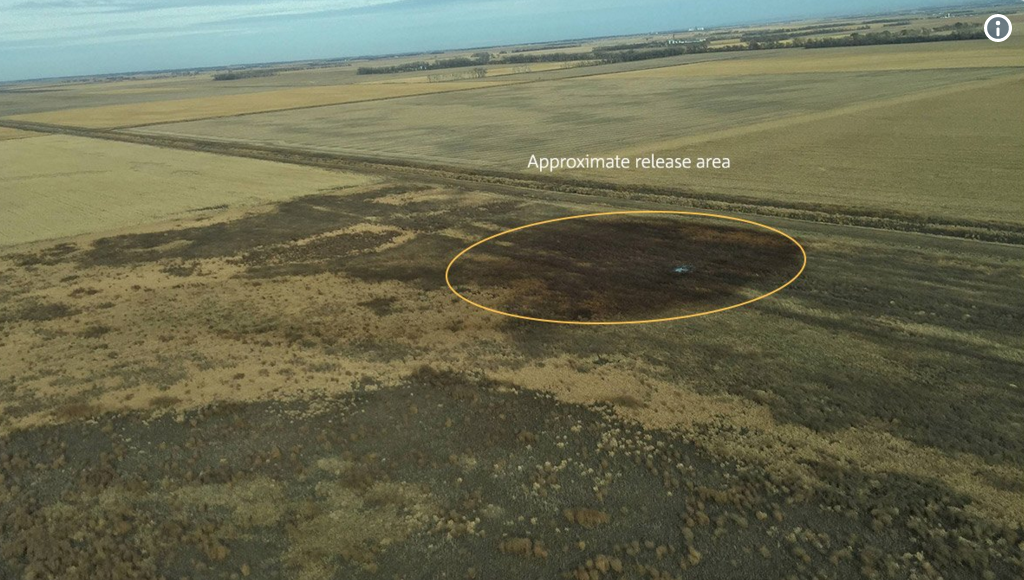 Work crews shut down the pipeline Thursday morning while officials investigate the cause of the leak. The incident occurred about three miles northeast from the town of Amherst.

“This is the largest Keystone oil spill to date in South Dakota,” said Brian Walsh, a spokesman for the state’s Department of Environment and Natural Resources, to CNN. There was a 16,800 gallon spill in South Dakota from Keystone in April of 2016, but Thursday’s spill is approximately twelve-and-a-half times larger.

At this hour, it is not known if groundwater was contaminated, or if any wildlife has been affected. “It is a below-ground pipeline, but some oil has surfaced above ground to the grass,” Walsh said. “It will be a few days until they can excavate and get in borings to see if there is groundwater contamination.”

TransCanada says it is working with state and federal authorities and claims there is no pubic health threat and that no further impact on the environment has been observed. “The safety of the public and environment are our top priorities and we will continue to provide updates as they become available,” the company said yesterday.

TransCanada ships bitumen crude from Alberta’s massive tar sands project to the lower-48 states via Keystone. Bitumen is an extremely viscous and toxic form of crude, containing at least twice as much climate-driving CO2 as conventional oil. The sticky substance has proven to be exceptionally hazardous to wildlife unfortunate enough to encounter the substance.

Another issue raising eyebrows is how close the spill occurred to the Lake Traverse Reservation, home of the Sisseton Wahpeton Oyate people of the Sioux Nation. Other Sioux bands were embattled for months in neighboring North Dakota, in the historic Dakota Access Pipeline (DAPL) fight in 2016 and 2017.

“The leak location is not on Sioux property, but it is adjacent to it and has historical value,” said Dave Flute to CNN. Flute is the tribal Chairman for Sisseton Wahpeton Sioux Tribe. “We want to know how long is it going to take to dig this plume of contaminated soil and how can we be reassured, without a doubt, that it has not and will not seep into the aquifer,” he continued.

The spill comes at a precarious time for TransCanada, happening just days before officials in Nebraska are slated to make a final decision on whether the Keystone XL (KXL) Pipeline, a conjoined project, will be allowed to move ahead.

Greenpeace says this spill is all the evidence needed to conclude the final leg of the project, the Keystone XL Pipeline, should be shuttered. “The Nebraska Public Service Commission needs to take a close look at this spill,” said Rachel Rye Butler, leader of the Democracy Campaign, for Greenpeace. “A permit approval allowing Canadian oil company TransCanada to build Keystone XL is a thumbs-up to likely spills in the future.”