(EnviroNews DC News Bureau) — Washington D.C. — Bureau of Land Management (BLM) administrators have drafted a “Priority Work List” that reveals BLM’s focus on oil, gas and coal development on federal land as well as the security of the U.S.-Mexico border. E&E News obtained the internal documents, which had not yet been shared with BLM staff.

The list was “assembled by the team at the BLM to clearly lay out our continued commitment to ensure opportunities for commercial, recreation and conservation activities on BLM-managed lands,” BLM spokeswoman Megan Crandall told E&E News.

In the first of five subsections, “Making America Safe through Energy Independence,” the following are identified as key components of “BLM Priority Work”:

A draft BLM “Key Messages Strategy” also shared by E&E News explains, “all of the above” energy development “includes oil and gas, coal, and renewable sources such as wind and solar – all of which can be developed on public lands.” The Key Messages Strategy outlines communication policies and strategies for BLM officials.

Climate change is not mentioned in the draft BLM plan and as E&E News puts it, “the draft priority list takes aim at almost every Obama-era federal lands management initiative, from landscape-level planning to livestock grazing, and is sure to be criticized by Democrats and conservation groups.”

Aaron Weiss, Media Director for the Center for Western Priorities, states the backlog of permits referenced in the work-list is a “red herring,” because BLM’s own data “show there is no significant backlog of applications.” BLM data also shows oil and gas companies typically take longer to complete the approval process than the BLM itself. Weiss points out this lag on the oil and gas companies’ part is likely due to the fact that in late 2015, they already held more than 7,500 approved but unused drilling permits, according to the most current available BLM information. 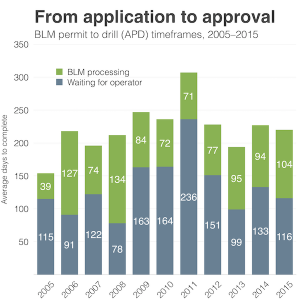 “While Interior Secretary Ryan Zinke has repeatedly claimed that BLM is pursuing a ‘multiple use’ policy, it is clear that the Administration wants a Bureau of Leasing and Mining, while paying lip service to all other uses, including conservation and recreation,” writes Weiss. 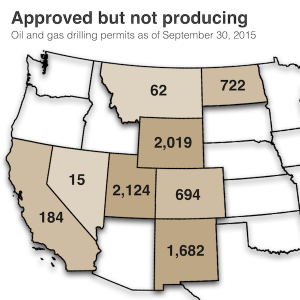 The four other points in the leaked document are titled, “Making America Great Through Shared Conservation Stewardship,” “Making America Safe — Restoring Our Sovereignty,” “Getting America Back to Work,” and “Serving the American Family.”

“Making America Safe — Restoring Our Sovereignty,” focuses on security projects along the U.S.-Mexico border and ensuring “public lands and resources are available to support the mission of our military.” Trump’s promised border wall, which would imperil many species including jaguars (Panthera onca), is not specifically named.

“Getting America Back to Work,” directs the BLM to “streamline land use planning to support energy and minerals development and other priority initiatives.” It also suggest “streamlining” National Environmental Policy Act (NEPA) processes and increasing the “efficiency of compliance activities” for the Endangered Species Act (ESA), National Historic Preservation Act and Clean Water Act.

The leaked priority list comes on the heels of another BLM messaging controversy last week, after the agency changed its website cover photo from an image of two backpacking boys gazing at pristine green mountains to a picture of a black coal strip from Wyoming’s Powder River Basin.