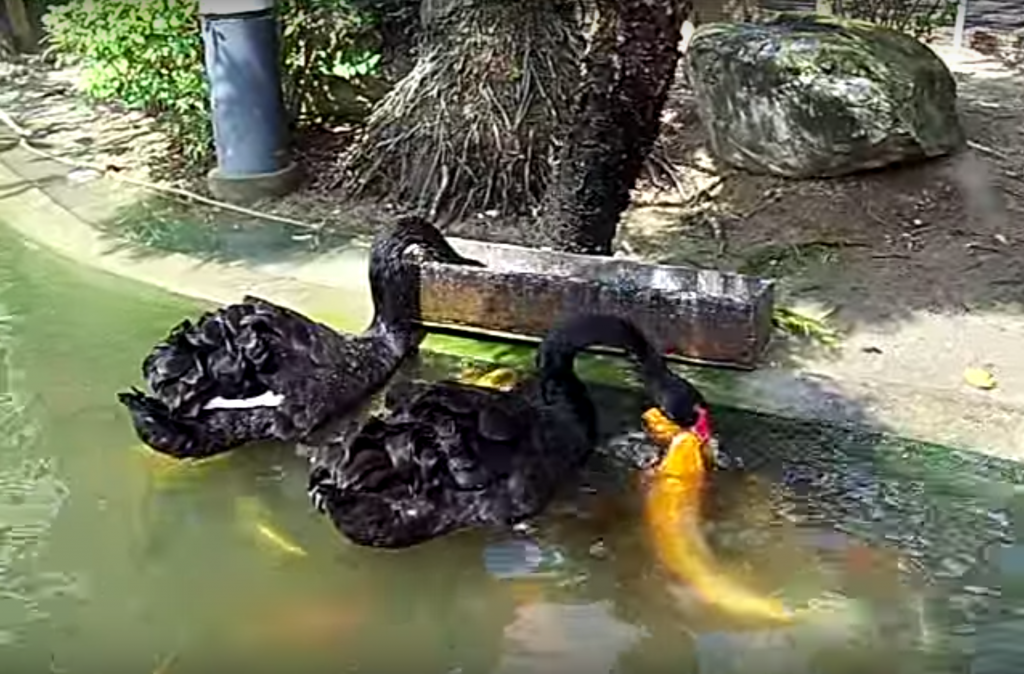 (EnviroNews World News) — What would Darwin say? What is the evolutionary advantage of a couple of black swans feeding their food to hungry koi fish? Or are there more powerful forces at work in the world than evolutionary advantage? Love or compassion for your fellow creatures for instance? Take a look at the video below, and tell us what you think is happening.

According to the man who shot this video at Taiwan’s Swan Lake Resort, hotel workers set out swan feed every day, and as soon as the birds begin eating, dozens of koi fish swim over and beg for their share. The fish were never disappointed. Because invariably, the swans would reach into the bin with their beaks, then bend down to the water and feed the fish — mouth-to-mouth.

We know what’s in it for the fish: a free lunch. But what do the swans get out of this arrangement? Indeed it seems the graceful birds get a raw deal, because there ends up being less food for them.

If you think these two black swans were trained to feed the fish — or have a special kinship with koi — think again, for apparently, a similar scene plays out the world over — wherever swans and fish share a pond.

Take a look at this video for example, of a couple white swans sharing their lunch with koi fish.

And here’s another one — this time, according to the description, it’s a black swan feeding fish at the Hyatt hotel in Maui.

Here’s a lone black bird patiently feeding what looks like hundreds of frenzied fish all angling to get a bite of grub.

Are swans a super-compassionate and caring breed of bird? Or are they just stupid, giving away their food to a species that can’t do anything for them in return?

To some people, it may look like inter-species cooperation and compassion, but biologists have a less mystical interpretation.

EnviroNews did some research and learned that swan feed usually consists of dry pellets — and in order to make it go down their long necks more easily, swans dip the pellets in water to make them moist. Fish in the pond ultimately get wise to the bird’s feeding habits, and swim over to snatch a bite.

For many wildlife lovers out there, it’s just easier to swallow the explanation that swans are simply compassionate, caring birds, taking good care of their fellow pond dwellers.

MORE ON SWANS FROM ENVIRONEWS