Ya' Think Hummingbirds Have the Fastest Birds Wings? (Not Even Close) - Wings So Fast They Sing Like Violins - EnviroNews | The Environmental News Specialists
Skip to content 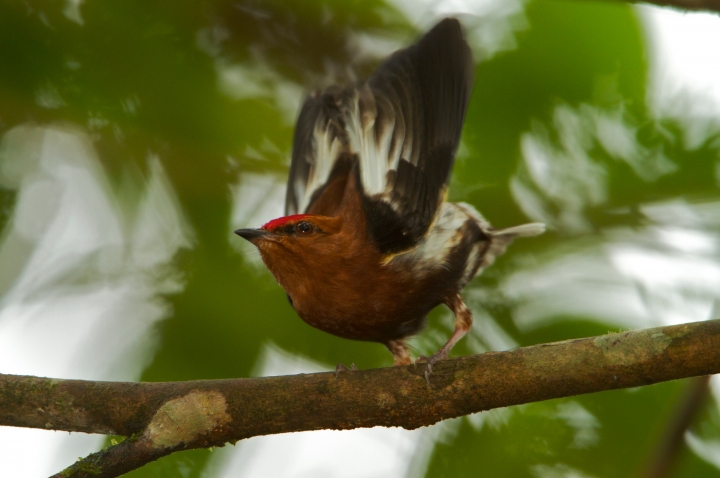 (EnviroNews Nature) — When we think of wings we think of flying – not music. Yet one of the world’s most unusual birds has evolved to sacrifice many of flight’s benefits, in exchange for song.

It’s true that nearly all wings are designed to favor one attribute of flight over another – such as speed over hover. But very few make such a pronounced tradeoff as the club-winged manakin (Machaeropterus deliciosus).

A study in 1997 by Dr. Kim Bostwick from Cornell University’s Museum of Vertebrates made huge strides towards establishing how this truly unique species creates its music.

Her high-speed camera showed the bird knocking its wings together at more than 100 times per second – that’s faster than a hummingbird.

When the wings met above the bird’s back, a special feather with a tip bent at a 45-degree angle, rubbed against another feather with seven separate ridges. She concluded it is this phenomenon that produces tones similar to a violin.

A trip to New York’s American Museum of Natural History cemented Dr. Bostwick’s theory when she noticed that, unlike most birds, the club-winged manakin’s wing bones are dense and thick, instead of sparse and hollow. It is thought this ensures vibrations are emitted from the feather as sound, rather than being absorbed into the bone.

While this type of music-producing apparatus is reasonably common in insects like crickets, which rub their wings together, manakins are alone in using this method in the bird world. Meanwhile, the club-winged variety stands alone in producing numerous notes and songs. But why?

Well, every bird species on the planet is constantly evolving its body – including its wings – in a constant battle for survival.

The tawny owl, for example, has developed tiny hooks on its feathers that absorb the ‘gushing’ sound usually associated with wings cutting through the air. These specialized features allow it to fly in near silence, while roaming the countryside in search of prey. Yet it is these same bespoke feathers that prevent it from flying at lightning speed like a peregrine falcon.

Likewise, the peregrine’s stiff, streamlined, and above-all, light wings allow it to fly as fast as 242 miles-per-hour in pursuit of agile aerial prey such as swifts and swallows. And yet it’s these light feathers, lacking the waterproof and somewhat heavy oils used by ducks, such as the mallard, which prevent it from hunting in the rain.

And last but not least – let us not forget the tiny little flier, often discussed for comparison where manakins are concerned: the hummingbird. Its rigid wings from shoulder to wingtip allow for power in both the upward and downward direction meaning it can generate both lift and propulsion. It is this facet which allows it to hover more stably than any other bird. But without the tiny 45-degree angled wing tip of the manakin, its wing beats surely don’t sound like a violin.

And so the tawny owl, which hunts during deathly quiet nights, has evolved to favor silence over pace. It hunts using surprise rather than speed-of-chase to seize its prey.

Meanwhile, the falcon prefers speed over water-resistance. Its feathers have evolved to provide the speed and agility required to outmaneuver prey that tends to avoid the rain.

Needless to say the mallard, which spends its time in lakes and rivers, values a permanently dry wing. It cannot flee a predatory fox with sodden feathers and has over time ditched the need for speed because, well, foxes can’t fly.

And finally, the hummingbird’s solid wing structure gives it the stability needed to suck pollen out of the smallest of flowers, but at the cost of complex wing tips to generate sound.


But the manakin family is truly unique. It has sacrificed speed, agility, water resistance, the ability to hover and countless other attributes of flight to improve the quality of its sounds – or in the case of the club-winged manakin – its music. But, again, why?

If there is one thing which wildlife values almost as much as food and self-preservation, it’s sex.

Dr. Bostwick suggested the evolution of the species’ “violin wings” is an example of sexual selection – a term used to describe how the mating preferences of females can have an impact on male characteristics.

She pointed out that manakins are polygynous, meaning males spend most of their time gathered in groups for mating displays. Her theory is that females have a preference for males which make a more “fascinating sound.”

But what is the price for such beautiful tones? Well, unlike most birds, the club-winged manakin’s feathers are not optimized to catch air, meaning it does not rank among the world’s greatest fliers. But then again, does it really need to?

Hidden away exclusively in the cloud forests of Columbia and Ecuador’s Andes Mountains, there is neither an abundance of obvious predators from which to flee, nor the need to migrate long distances.

The ability to fly from tree-to-tree eating fruit is one of the few demands on its tiny wings, meaning the males can concentrate on doing what they do best – wooing the ladies with their sultry tones.

Biologists concede there is still much to learn about this beautiful and unique bird – chiefly as to why females are such lovers of music. But access to its habitat is highly challenging for scientists as the bird is perfectly camouflaged among the lush green canopy. While frustrating for research, this helps ensure the club-winged manakin will remain a musical enigma for some time to come.