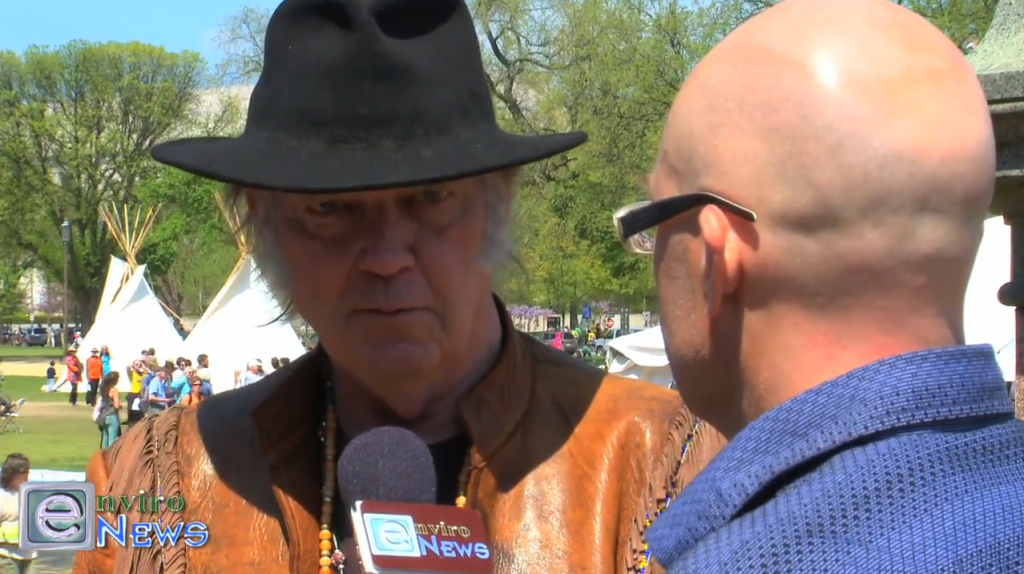 Since Monsanto began selling their patented “Roundup Ready” genetically modified (GM) seeds they have sued hundreds of farmers for patent infringement. Today over 90% of the soybean, corn and cotton produced in the USA are a product of Monsanto.

The film’s focus is on one Michael White, a farmer whose 80-plus-year-old late father Wayne White was sued by Monsanto for patent infringement — but, the humble farmer fights back against the transnational agribusiness giant.

The ten minute short film focuses exclusively on his tale and the plight experienced by his father while fighting the controversial “franken-food” Goliath Monsanto, tooth and nail in court. Readers may view the film it in its entirety in the video player below.

Young said this in an official statement on his Facebook page in conjunction with the release of the film:

A Message From Neil Young -As I write this, the dark act is up for a vote in the House of Representatives; representatives of the people. The dark act takes away the rights of those people to vote for or against things like GMO labeling in their states. It does seem ironic. If the act is passed, it will truly be a dark day for America.Monsanto is a corporation with great wealth, now controlling over 90% of soybean and corn growth in America. Family farms have been replaced by giant agri corp farms across this great vast country we call home. Farm aid and other organizations have been fighting the losing battle against this for 30 years now. Dairy and meat farming is done in those white sheds you see from the freeway, no longer on the green pastures of home with the old farmhouses and barns. Those beautiful buildings now stand in ruin across the country. This has happened on our watch while the country slept, distracted by advertising and false information from the corporations. Monsanto and others simply pay the politicians for voting their way. This is because of “Citizens United”, a legislation that has made it possible for corporations to have the same rights as people, while remaining immune to people’s laws. Both Democratic and Republican front runners are in bed with Monsanto, from Clinton to Bush, as many government branches are and have been for years. This presidential election could further cement the dominance of corporation’s rights over people’s rights in America. If you have a voice you have a choice. Use it.On the human side, the film I would like you to see tells the story of a farming family in America, but the same thing is happening around the world. It is a story that takes 10 minutes of your time to see. It is a simple human one, telling the heartbreaking story of one man who fought the corporate behemoth Monsanto, and it illustrates why I was moved to write The Monsanto Years.The film presents a rare opportunity to hear from the source as Mr. White is one of only four farmers who is still legally allowed to speak about his case as all the others have been effectively silenced.Thanks for reading this and I hope you look at this simple and powerful film, “Seeding Fear”. Neil Young — The Monsanto Years

Young’s most recent album with Lukas Nelson, son of country music icon Willie Nelson, is titled “The Monsanto Years” and aims to expose Monsanto for myriad dastardly deeds — accusations that Monsanto has been rebuffing in the media.

Young has been more vocal than ever in recent years on several environmental issues including climate change, tar sands, and fracking.

Please enjoy our on-camera feature with the legendary rocker at the Cowboy and Indian Alliance last year in Washington D.C. The interview features Young on the topics of Canada’s tar sands, Utah’s tar sands, climate change and the nuclear meltdown at Fukushima Daiichi.