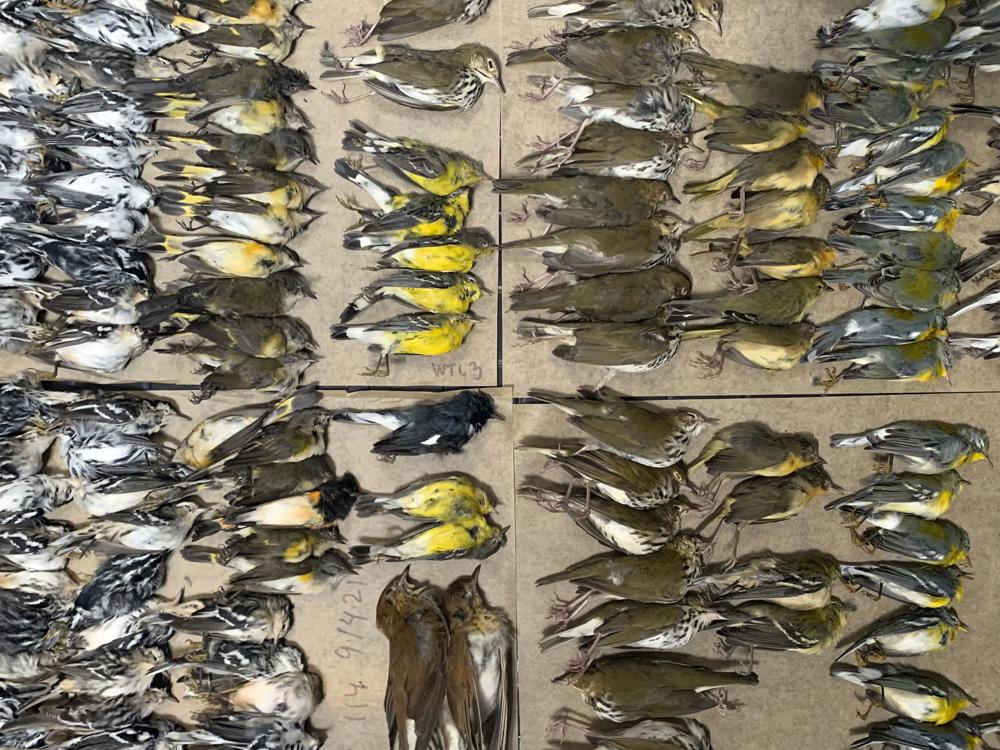 Melissa Breyer, Editorial Director at Treehugger and a volunteer with New York City Audubon, which works to protect local birds and their habitats, tweeted, “As soon as I got to the buildings, the birds were everywhere on the sidewalk.”

Breyer, who described the incident as “overwhelming” added, “When you have 226 dead window-struck migratory birds from one morning, it’s hard to get them all in one photo. The sidewalks were literally covered with birds.”

The organization’s associate director, Kaitlyn Parkins, suggested bad weather may have been responsible for confusing the birds. She told the Associated Press (AP), “It seems that the storm might have brought the birds in lower than they would have otherwise have been, or just disoriented them. The effects of nocturnal light on birds are also quite strong, especially when it’s a cloudy night.”

Most of the bird carcasses were found near the World Trade Center buildings with species mostly consisting of passerines such as finches and warblers and songbirds including thrushes and robins. Reports from the ground indicate yellow-throated warblers (Setophaga dominica) seemed to have taken the most casualties.

Jordan Barowitz, a spokesperson for the Durst Organization, which co-developed One World Trade Center, told AP the design of the building was chosen because it “greatly reduces bird strikes which mostly occur below 200 feet and are frequently caused by reflective glass.”

Meanwhile, a spokesperson for Silverstein Properties, which developed Three, Four, and Seven World Trade Center, told the New York Post, “We care deeply for wild birds and protecting their habitat in the five boroughs.”

“Understanding that artificial night-time lighting in general can attract and disorient migrating birds, we are actively encouraging our office tenants to turn off their lights at night and lower their blinds wherever possible, especially during the migratory season,” Silverstein Properties continued.

[cw continued] All the birds I found this morning who crashed into windows at the @_WTCOfficial complex. A lone northern parula made it to @wildbirdfund. A mass casualty event grabs attention, but this is constant throughout migration. pic.twitter.com/iD4F5Oa9Z4

On a positive note, nearly 80 injured birds were collected from the foot of the buildings. They were taken to a rehab facility run by the Wild Bird Fund. Director Ritamary McMahon said 30 made a full recovery and were subsequently released in a nearby park. She told AP, “One of our staff took an Uber down to Prospect Park to release them so they wouldn’t face any more tall buildings on their travels.”

Some populous cities in North America such as Toronto and New York City have schemes designed to combat the dangers posed by tall buildings. The Canadian city’s initiative is entitled the Fatal Light Awareness Program (FLAP) while the Big Apple’s Lights Out New York program operates with a similar agenda.

According to FLAP, between one and nine million birds die in New York City each year after mistaking reflections in windows for the open sky or after being lured to lights at night.

The city of Miami, Florida is also making efforts to tackle the problem as millions of birds migrate through that city via a route known as the Atlantic Flyway. Accident-prone species include northern parulas (Setophaga americana), ovenbirds (Seiurus aurocapilla), and black-throated blue warblers (Setophaga caerulescens).

Students at Florida International University told the Miami New Times how each week they scour the campus in search of dead birds which have met their end after smacking into tall buildings. Student Jennifer Quintero snaps a photo of each corpse, notes the species name, and records the date, time, and location. “As I get more data I’m going to try to identify which buildings in particular are the problem buildings,” Quintero said.

She also explained that most bird victims are killed by window strikes as reflections give the impressions of a clear open sky. They also use the stars of the night sky as one of several navigational aids during migration, meaning light pollution can disorient them and lead them into danger. Some accidentally veer off course while others get completely confused and end up circling buildings for long periods of time, eventually succumbing to exhaustion.

For many however it is a much quicker death. Confused by the bright lights of town buildings, they crash at high speed, dying from head trauma or spinal injuries. A report published by the ornithological journal Condor in 2014 estimated 365 million to 988 million birds die each year in the United States due to collisions with structures.