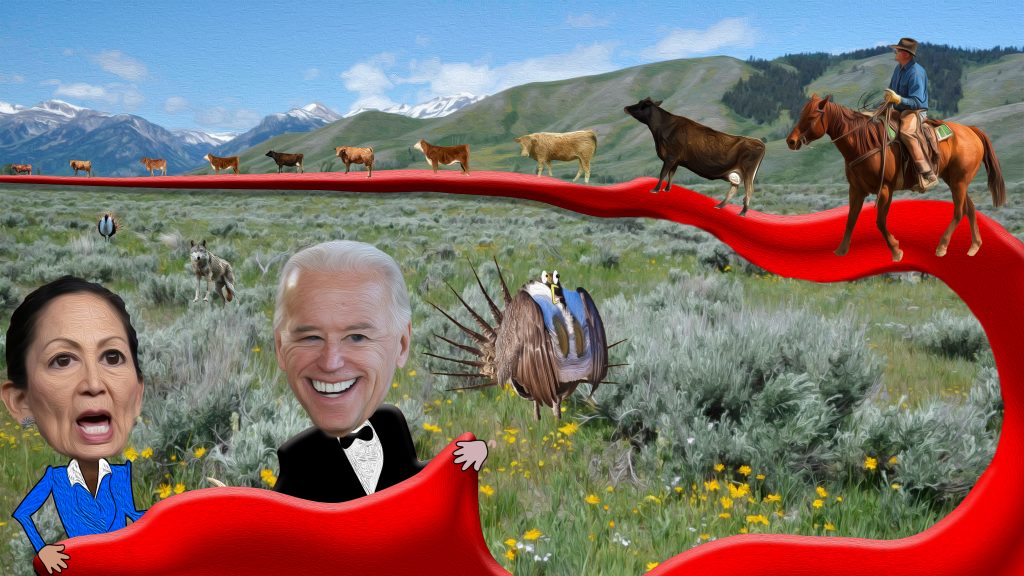 (EnviroNews DC News Bureau) — Washington, D.C. — The Bureau of Land Management (BLM) and U.S. Forest Service (USFS) have announced the fee for grazing on federal lands in 2022 and conservationists are dismayed, accusing the Biden Administration of subsidizing the destruction of the American West. The fee of $1.35 per cow-calf pair per month is the lowest possible fee allowed under a Reagan-era Executive Order.

“It’s a great deal for the beef industry, but it’s a horrible deal for the American public because of the compounded costs of plant and animal extinction, fouled waterways, increased risks of wildfire, ongoing predator killing, and the irreplaceable cultural resources being trampled to bits,” Josh Osher, Public Policy Director for Western Watersheds Project (WWP), said in a press release.

The WWP denounced the low fee as a giveaway subsidy for the cattle industry that fails to reflect “the true costs of public lands grazing.” Commercial grazing contributes only 2-3 percent of the beef consumed in the United States, yet is one of the most heavily subsidized activities on public lands. Osher and WWP point to how the program costs taxpayers at least $1.5 billion every 10 years, while the minimal fees recoup just one-tenth of that cost.

But the BLM defended the decision, with communications spokesperson Richard Packer telling EnviroNews in an email that the formula used for calculating the grazing fee was established by Congress in the Public Rangelands Improvement Act of 1978 and has remained in use under the 1986 Executive Order from Ronald Reagan. “The Biden-Harris Administration remains committed to achieving climate change and conservation goals,” Packer added.

In an email to EnviroNews, WWP’s Osher said the two agencies rationalize the low fees by saying they’re just following an established formula that’s out of their hands. But he deemed that “a bureaucratic cop out,” noting the original fee formula was intended to be temporary and was twice recalibrated only to be nixed — first by President Ronald Reagan and then by President Bill Clinton’s administration “because they didn’t want to anger ranchers and western politicians.”

Osher further noted how the Biden Administration could rescind Reagan’s Executive Order at any time and develop a new formula that’s equitable to taxpayers, while also reflecting a commitment to utilize public lands for conservation rather than extraction. He says the fact they haven’t taken the bull by the horns reveals a lack of political will:

“They are just about to raise the royalty rate for oil and gas on public lands but don’t seem interested in addressing grazing.  It’s politics plain and simple.  There isn’t much political gain in stirring the hornets’ nest and taking on grazing.

When queried further about the low royalty rate, BLM’s Packer responded to EnviroNews by citing a 56-year-old formula. “As stated in the press release, the annually determined grazing fee is established using a 1966 base-value of $1.23 per animal unit-month/head-month for livestock grazing on public lands in western states,” Packer said. “The figure is then calculated according to three factors: current private grazing land lease rates, beef cattle prices, and the cost of livestock production. In effect, the fee rises, falls, or stays the same based on market conditions,” Packer continued.

Regarding the question of  how such low fees for ranchers translate to good public policy, Packer responded by saying the agency’s overall goal with the “rangeland management program is to ensure the health and productivity of public rangelands for the use and enjoyment of current and future generations.” He pointed out that changes to the grazing fee have been considered by Congress and the President at times in recent decades, but that those proposed fee-changes have not been adopted.

As to the potential question of whether higher grazing fees would be passed off to consumers in the way of higher prices for beef, Osher says such an argument doesn’t stand up.

“The truth is that most beef is not produced in the West anyway and an increase in the public lands grazing fee would not have even the slightest impact on prices, which are set by the few large meatpacking companies,” Osher told EnviroNews.

WildLands Defense is another organization that works to advocate for the preservation of wild lands in the West. Katie Fite, the organization’s Director of Public Lands, detests how the government’s low grazing fees lead to destruction of ecologically sensitive terrains; she says the damages far outweigh the benefits of the beef produced. In an email to EnviroNews, she wrote:

Public lands [ranchers’] cattle and sheep herds are causing an explosion of flammable weeds, polluting stream water, and wrecking sage grouse habitat across the West… Congress must act to change the grazing fee formula and end this livestock industry freeloading at the public’s expense.

Fite, who is also a wildlife biologist, added that cattle and sheep ranchers should be paying at least fair market value for “forage” and went on to suggest that Congress should “boot every cow and sheep” off public lands.

“It’s what needs to be in any real Green New Deal and what needs to happen to keep the West from being overrun by weeds, and to buffer public lands, waters and wildlife habitat from climate change stresses,” Fite asserted. “Raising grazing fees is a step towards rancher accountability for use of the public lands.”

As to the issue of weakened ecosystems and increased wildfire danger in the West due to overgrazing, Packer said the BLM continues to address resource challenges through the Integrated Rangeland Fire Management Strategy and associated Actionable Science Plan.

“Through this framework, we work collaboratively on science-based and evidence-based solutions to the management and restoration challenges associated with invasive species and specifically invasive annual grasses including cheatgrass,” Packer wrote.

Paving the Way for Livestock: Rounding up America’s Wild Horses at Breakneck Speed

On a closely related topic, the Biden Administration’s Interior Department under Secretary Deb Haaland, has been taking heat for carrying out the largest wild horse roundups in history in 2021-2022. The Administration is set to remove another 19,000 horses this year after already removing thousands in 2021, outraging animal advocates and conservationists alike. Ranchers claim the wild horses and burros compete for forage with their cattle and sheep and advocate for their removal from public lands.

The American Wild Horse Campaign (the Campaign) describes the current public lands grazing situation as “welfare ranching,” pointing out how taxpayers fund more than 90 percent of the cost for commercial ranchers to graze their private livestock on public land. The organization also takes issue with commercial ranchers viewing wild horses as competition for taxpayer-subsidized livestock grazing on public lands. When then-Acting BLM Director William Perry Pendley served on an environmental panel in 2019 and claimed “wild horses are the existential threat to public lands” at a time when they were present across no more than 12 percent of BLM lands, the Campaign took issue.

“The ridiculousness of this statement becomes obvious when one considers that wild horses don’t exist on more than 88 percent of BLM lands, and where they do occur, they have to share the range with domestic livestock,” the Campaign observed on its webpage. ”Take Nevada for instance, the state with the largest population of wild horses.”

The California Cattlemen’s Association was unable to respond to EnviroNews’ questions about the grazing fees before deadline due to a conflict with an industry conference.