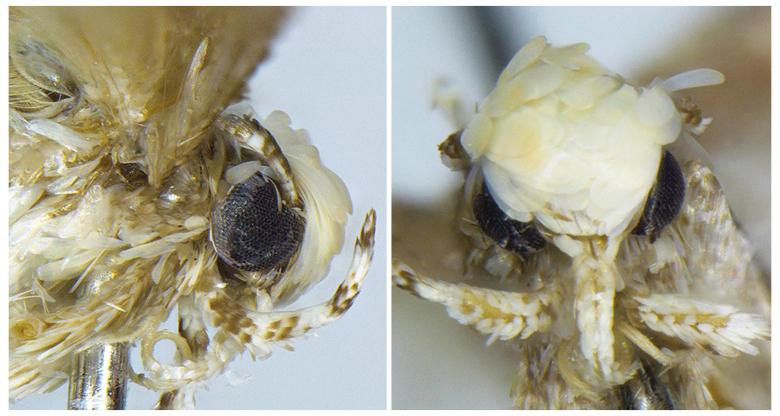 (EnviroNews Nature) — The third week of January 2017 was a big one for Donald Trump, due not only to his presidential inauguration, but also the fact that he now has a tiny moth named after him and his notorious hair-do. Canadian evolutionary biologist and systematist Dr. Vazrick Nazari gave their newly discovered moth species the scientific name Neopalpa donaldtrumpi, after they had earlier nicknamed it, “Donald Trump’s Hair moth.” It lives in California and Mexico and has what BBC refers to as, “striking golden flakes covering its head.”

Nazari discovered N. donaldtrumpi while exploring and analyzing materials from the Bohart Museum of Entomology of the University of California at Davis. This species of petite twirler moth, which he described in the journal ZooKeys, is orange, yellow and brown, with a less than one-centimeter wingspan.

The press release shared that Nazari aims to draw attention to the need for increased conservation efforts in fragile habitats in the Americas for “undescribed and threatened species” and that he also “found an amusing reference to Mr. Trump’s hairstyle.” NBC News explained that this family of moths are called twirler moths because they have a “habit of twirling in circles when disturbed.”

Nazari told The Washington Post that micro-fauna are often neglected in alpha-taxonomy and that the dune habitats where N. donaldtrumpi can be found are “threatened by passersby or by dune-buggy enthusiasts,” specifically pointing to the Algodones Dunes in Southern California. He also told The Washington Post that he hopes this paper on the N. donaldtrumpi “will help spark some interest with younger people, who might want to consider entomology as a career.”

Trump’s striking hairstyle has long been a subject of discussion in both humorous and serious contexts. A Chinese golden pheasant became a famous Trump look-alike in late 2016. His relationship to his hair was central to his first wife Ivana Trump’s rape allegations; wherein she stated in a sworn deposition that the sexual assault occurred after his painful scalp reduction surgery (she had recommended the surgeon). This testimony was revealed in Harry Hurt’s 1993 book, “Lost Tycoon: The Many Lives of Donald J. Trump.” ABC reports that Ivana later said that, while she felt “violated,” her reference to rape was not meant in a “criminal sense.” In 2015, Trump tweeted that Hurt was a “dummy dope” who had written “a failed book.”

Barack Obama has nine species named after him, including a spangled darter called Etheostoma Obama, several other fish, a bird, a hairworm and an extinct lizard. Supreme Court Justice Ruth Bader Ginsburg had a praying mantis named for her in 2016: the IIlomantis ginsburgae.