(EnviroNews Wyoming) — The Nuclear Regulatory Commission (NRC) has said no punishment will be levied against Cameco Corporation for spilling radioactive waste along a 600-mile route between eastern Wyoming and Blanding, Utah — not once, but twice.

Cameco was facing a $35,000 fine for the mishaps, but won’t have to pay “in part because the company plans in the future to store the barium sulfate sludge in bags within the trucks,” according to the Associated Press (AP). “However, significant violations in the future could result in a civil penalty,” Scott Morris, NRC Deputy Regional Administrator, wrote the company at the end of June.

Cameco is a Canadian company, and “one of the world’s largest uranium producers providing about 17 percent of the world’s production from mines in Canada, the U.S. and Kazakhstan,” according to the company’s website. Cameco Resources Inc., the U.S. subsidiary of the Canadian parent, performs in-situ (ISR) uranium mining at the Smith Ranch-Highland facility in northeastern Wyoming. The operation is the largest uranium processing facility in the United States, and between 2002 and 2011 yielded 15 million pounds of the radioactive element. 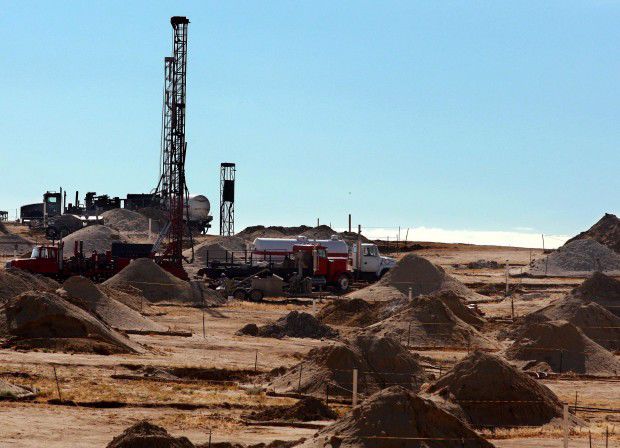 The spills occurred in 2015 and 2016 along the 600-mile path to the waste’s ultimate destination: the White Mesa Mill waste disposal facility operated by Energy Fuels Resources Inc. Workers noticed the leaks when the trucks pulled into the site. In once incident, the white sludge sloshed out of the back of the truck when the driver slammed on the brakes near Meeker, Colorado to avoid hitting a deer. In the other spill, material got loose “from a faulty door in the truck container,” according to the AP.

“The NRC determined that Cameco committed nine rule violations. All were on the low end of the agency’s severity scale but five were serious enough to warrant fines,” the AP reported. While Cameco’s promises have been sufficient for the NRC, the company’s assurances are far from good enough for watchdogs and environmentalists.

“I think there’s a concern in southeastern Utah that waste is coming down I-70 and then down Highway 191 to White Mesa,” said Sarah Fields, Program Director of Moab-based Uranium Watch, in an interview with Utah Public Radio (UPR). Fields continued:

And because of a lack of regulatory oversight, waste has not been properly packaged. It has not been properly characterized. I don’t think the Utah Division of Waste Management and Radiation Control has a good handle on the disposal of this particular type of very liquid, radium and barium-laden waste. The NRC has asked for more details, and if they’re still asking questions then I’m sure the state of Utah really needs to ask questions about what is in this material… Cameco, at this one facility, has a long history of incompetence, indifference, a lot of violations, a variety of violations.

The “paste-like” substance is a typical byproduct of in-situ uranium mining, a process wherein a mixture of oxygen, water and baking soda dissolve uranium out of sandstone deposits, whereafter it is finished into yellowcake or nuclear fuel pellets.

“Cameco is pleased to have resolved the problem to the NRC’s satisfaction,” company spokesman Gord Struthers told the AP.