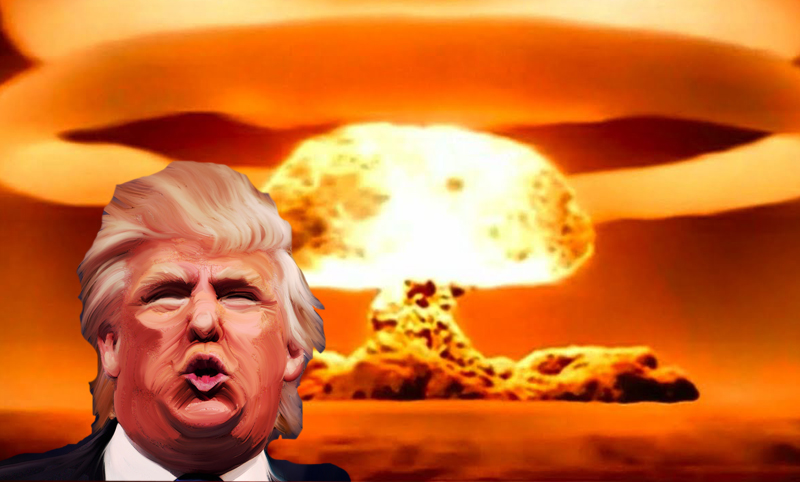 (EnviroNews USA Headline News Desk) — “Let it be an arms race. We will outmatch them at every pass — and outlast them all.” That was the response by President-elect Donald Trump, according to MSNBC Morning Joe host Mika Brzezinski, when she asked him about his inflammatory Tweet on nuclear expansion from December 22, 2016.

The conversation happened via phone after newly appointed Press Secretary Sean Spicer was finished with his appearance on the show. Spicer had the President-elect on the phone and that’s when Trump dropped what has become a nuclear bomb of words on Brzezinski: “Let it be an arms race.”

The statement has pundits and news personalities stunned throughout the beltway media, and is sparking a widespread feeling of unease with people who remember the tense standoffs of the Cold War — and with people who understand the daunting Department of Energy (DOE) task of cleaning up all the nuclear waste at the country’s Manhattan Project “legacy” bomb-making sites.

All of the posturing came after Russian President Vladimir Putin also stooped down and engaged in nuclear rhetoric during a four-hour-long press conference saying, “We can say with certainty — we are stronger now than any potential aggressor. Anyone.”

Putin followed up with, “We need to strengthen the military potential of strategic nuclear forces, especially with missile complexes that can reliably penetrate any existing and prospective missile defense systems.” A few hours later, Trump’s Tweet was on the wire stating, “The United States must greatly strengthen and expand its nuclear capability until such time as the world comes to its senses regarding nukes.”

The phone conversation between Trump and Brzezinski, came shortly after Spicer had vehemently defended Trump’s nuclear Tweet from Thursday saying, “Other countries need to understand that if they expand their nuclear capabilities, this president’s not going to sit back. He’s going to act. There are a few countries around that globe — Russia being one of them, China, others, that have talked about increasing their nuclear capabilities. I think the President-elect’s point is, unless these guys come to their senses and recognize that this is not a smart move — increasing the nuclear stockpile around the globe is not good for anybody, but the U.S. is not going to sit back.” And minutes after that, Trump declared, “let it be an arms race.”

Kellyann Conway, Trump’s new pick as White House Councilor to the President, appeared on the Rachel Maddow show on December 22, and also found herself having to defend Trump’s nuclear expansion Tweet. You can see that interview in the video player below.

Both the United States and Russia have been in the process of disarming and decommissioning for nearly three decades now. In 1991, the two nations entered into the START I (Strategic Arms Reduction Treaty) treaty, in an effort to make the world a less fearful and safer place. That policy was renewed when the New START Treaty was signed by President Barck Obama and then-Russian President Dmitry Medvedev in 2010 — that has been the course of action ever since. The fact that Trump and Putin are both beating the drum of a nuclear arms race is, to many people, downright scary.

Considering that Trump is now the “leader of the free world,” perhaps he might think about leading in one very important department — that is, the department that helps the “world to come to its senses about nukes” — just a thought.