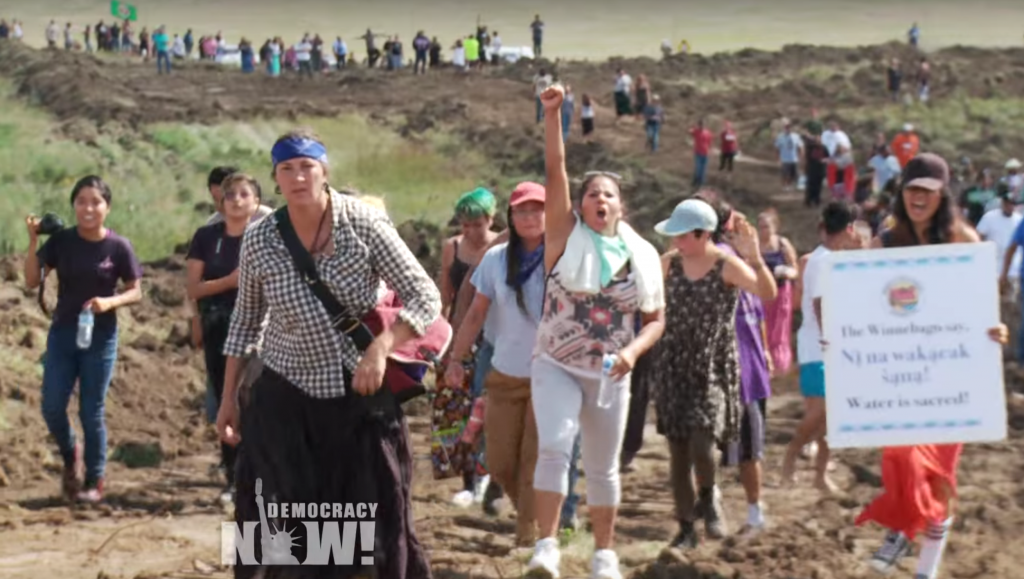 (EnviroNews World News) — Standing Rock Sioux Reservation, North Dakota — Pepper spray filled the air and attack dogs were deployed as protests against the Dakota Access Pipeline Project (DAPL) turned violent on Saturday September 4, on the Standing Rock Sioux Reservation. Native American activists representing dozens of tribes, congregated from all reaches of the country and Canada, and squared off against private security officers commissioned by Energy Transfer Partners LP. The security squad savagely pushed and tackled group members as well, but eventually had to retreat after failing to manage the outraged crowd of about 200.

Reports from the ground, and video footage provided by Democracy Now, show the event got out of hand after Native American protestors, who prefer to be called “protectors,” broke through a wire fence in an effort to stymie bulldozers that were running over what they say are sacred burial sites of the Great Sioux Nation.

On Friday, Sept 3, the tribe says it disclosed multiple sacred sites that were in the immediate path of the $3.8b dollar project, and according to Jan Hasselman, an attorney from Earth Justice representing the tribe, Energy Transfer Partners turned out intentionally the very next day to destroy those areas. An emergency hearing has since been called in federal court to address the allegations.

“We’re days away from getting a resolution on the legal issues, and they came in on a holiday weekend and destroyed the site,” said Hasselman. “What they have done is absolutely outrageous.”

“On Saturday, Dakota Access Pipeline and Energy Transfer Partners brazenly used bulldozers to destroy our burial sites, prayer sites and culturally significant artifacts,” said Chairman David Archambault II in a press release on Sunday. “They did this on a holiday weekend, one day after we filed court papers identifying these sacred sites. The desecration of these ancient places has already caused the Standing Rock Sioux irreparable harm. We’re asking the court to halt this path of destruction.”

Activists, both Native and non-Native alike, have been furious about what they see as a fast-track approval of DAPL by the U.S. Army Corps of Engineers, after the State Department effectively shot down TransCanada’s plan to build what would have been the fourth and final leg of the Keystone XL Pipeline last year — after years of battling. Environmentalists say DAPL accomplishes a similar mission, and is a sneaky backdoor move by big oil to get hydrocarbons across the country. Proponents of DAPL say it is a safer and cheaper way move crude than trains, and that the project will create jobs.

At Saturday’s protest, Democracy Now host Amy Goodman reported from the midst of the melee, and repeatedly asked the private security personnel why they were siccing their dogs on the protestors — to which the guards didn’t have much of a response. One dog’s mouth was dripping with blood after reportedly biting protestors.

The video grows very tense when Goodman confronts one of the security officers about what he and his crew were spraying the crowd with. When he denies doing it, a “protector” immediately jumps right in front of the camera and accuses the man of just having maced him.

Another man, with a hispanic accent, then comes into the camera frame showing a bleeding arm that he says was caused by attack dogs:

After this, all hell breaks loose again with shouting matches between security and the crowd, as protectors on horseback circled up on the security squad in an effort to stave off the dogs.

Protector #4: These people are just threatening all of us with these dogs. That woman over there, she was charging them, and it bit somebody right in the face. And then it charged at me and tried to bite me. And they are still threatening these dogs against us and we’re not doing anything.
Goodman: Why are you letting her dog go after the protestors? It’s covered in blood?
Protector #5: (Shouting) Get your fucking dogs out of here! Get your fucking dogs out of here!

After the heated exchange, Goodman interviews a woman receiving an eye flush from being maced. “How are you doing,” Goodman asked. “I’m great!” she replies. After this, the security personnel reportedly started to load up the dogs and get ready to leave. But then the protectors surrounded them again to make sure they were leaving.

Protector #6 (Oglala Sioux Man): I got maced twice. I got bit by a dog. I was frontline…
Goodman: You pushed them back though?
Protector #6: Yes.
Goodman: Why is this such an important fight to you?
Protector #6: Because water is life, like I said. Without water, we wouldn’t be here. These plants wouldn’t be here — there’d be no oxygen. We’d all die without it. I wish they’d open their eyes and have a heart, to realize, if this happens, we’re not going to be the only ones that’s going to suffer. They are going to suffer too.

The video concludes with Goodman interviewing one of the protectors on horseback after the security team had been run off: