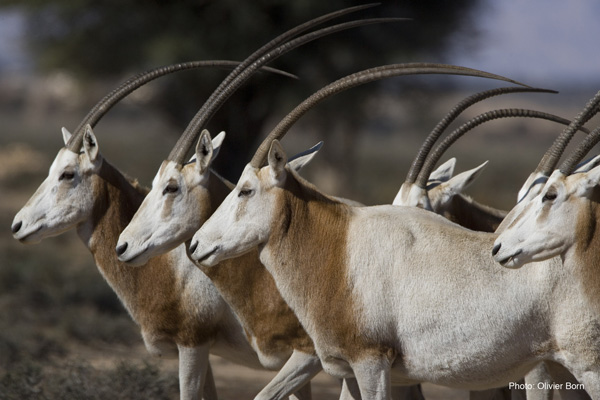 (EnviroNews World News) — Gone but not forgotten, and now returned to the wild. Five thousand years ago, as many as one million scimitar-horned oryx (Oryx dammah) grazed the steppes and subdeserts of North Africa. The white-bodied antelopes with russet necks are well adapted to this hot, arid region. As recently as 100 years ago, hundreds of thousands still roamed. Sadly, with a little help from humanity, by the year 2000 the species was declared extinct in the wild by the International Union for the Conservation of Nature (IUCN). But as of 2017, they are back in nature where they belong once again.

Fourteen oryx from captive breeding programs were released into a game reserve in Chad in January 2017, joining an initial 21 that were reintroduced to the wild in August 2016. An additional 25 animals are scheduled to be added this July.

In March, the Smithsonian announced that two calves had been born in the wild. Including one previous birth, that makes three successful pregnancies for wild scimitar oryx — the first such events in more than 20 years. These births give hope that a self-sustaining population of wild oryx will become established in the region.

Scientists attribute the demise of the scimitar oryx in the twentieth century to over-hunting, drought and over-grazing by domestic livestock in their habitat. By the early 1980s, there were less than 200 in Niger and just a few small groups elsewhere in North Africa, according to the IUCN. The deathblow for the oryx came from the civil war in Chad and regional civil unrest in the 1980s and 1990s.

“This ambitious and historic recovery effort was made possible by the establishment of a ‘world herd’ of scimitar-horned oryx in Abu Dhabi, and a decades-long history of excellence in the care and management of this species,” said Steve Monfort, the John & Adrienne Mars Director of the Smithsonian Conservation Biology Institute (SCBI), as quoted by Smithsonian Insider.

The largest group of captive oryx exists in the United Arab Emirates, numbering about 3,000 animals. The IUCN says there are also captive herds in several countries that were part of the antelope’s historic range, including Tunisia, Morocco and Senegal. Others are found at the Smithsonian and the Whipsnade Zoo of the Zoological Society of London (ZSL). Both the Smithsonian and ZSL are assisting in the reintroduction program. 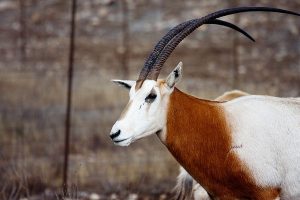 “The animals are getting everything they need to survive and thrive,” Monfort said in a Smithsonian video. The oryx are fitted with GPS collars that report their position to satellites, allowing real-time monitoring of their movements. So far, there have been no mortalities among the wild oryx.

The return of the scimitar-horned oryx is not the only recent conservation success story. In the U.S., the reintroduction of gray wolves to the Greater Yellowstone Ecosystem has reduced the overpopulation of elk and improved biodiversity. Banning DDT has allowed the recovery of bald eagles, brown pelicans and osprey. In Europe, conservation efforts are helping the comeback of brown bears, Eurasian lynx, grey wolves and wolverines, while China’s giant panda is no longer considered “endangered” by the IUCN. 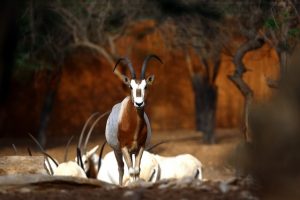 But Science Daily observes that, while it is important to celebrate these and other conservation successes, it is too easy to become complacent. Andrew Balmford, Professor of Conservation Science at the University of Cambridge, notes that some states have already allowed hunting for wolves in the lower 48 states, in places where the population is less than two percent of its historic number. “If we forget where we’ve come from, we risk allowing things to slip backwards,” he warned.