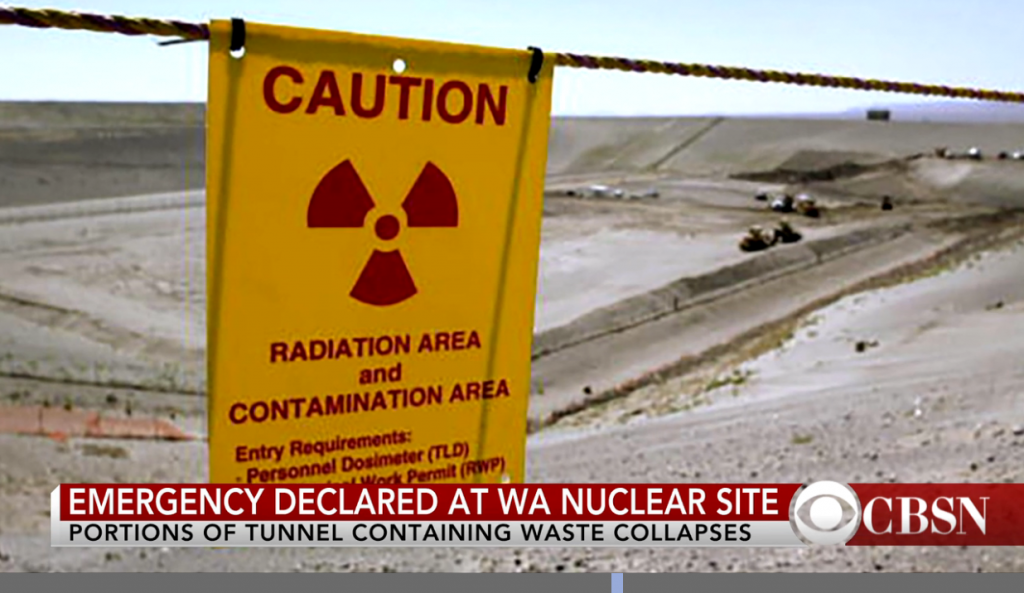 (EnviroNews Washington) — Hanford Nuclear Reservation, Washington — At about 8:30 a.m. on May 9, 2017, an emergency alert was activated at the Hanford Nuclear Reservation (Hanford) in southeastern Washington after a tunnel containing nuclear waste collapsed. Workers were evacuated after the tunnel, which holds railcars full of nuclear material, suddenly gave way, at the Plutonium Uranium Extraction Facility (PUREX) – an area located near the center of the massive complex. No workers were harmed in the incident.

The Hanford site, run by the U.S. Department of Energy (DOE), explained, “Later this morning, the alert was expanded to a Site Area Emergency. A Site Area Emergency is declared when the event is affecting or could potentially affect personnel beyond the facility boundary but not beyond the boundary of the Hanford Site.” The aboveground area is currently being surveyed but no radiation has been detected at this point.

The tunnel cave-in encompassed an area of approximately 400 square feet near where two of the underground tunnels meet. The soil above the incident visibly sunk between two and four feet. The accident was discovered during routine surveillance and no workers were in the tunnel at the time. CBS News reports that some employees were sent home while some were “asked to secure ventilation and shelter indoors.”

“This is a serious situation,” said Washington Governor Jay Inslee in a written statement. “Ensuring the safety of the workers and the community is the top priority.”

Crews at Hanford are deploying a “TALON,” remote operated surveillance device that carries out radiological and industrial hygiene monitoring and also records video footage. Hanford’s Emergency Operation Center released a live video about the event on Facebook Tuesday afternoon, saying the cause of the accident was unknown and that there was “no evidence of a radiological release.”

Established during WWII, Hanford contains about 56 million gallons of radioactive waste. The facility is famous for being the U.S.’s most contaminated nuclear waste storage facility, with current cleanup expected to take at least another 50 years and cost over $100 billion. Myriad radioactive leaks into groundwater have been detected over the years as the facility still struggles to ratchet down problems like the plutonium sludge leak from double-shell tank AY-102.

The proper storage of the nation’s backlog of nuclear waste has been a contested topic of late, as the Trump Administration looks into reinvigorating the contested Yucca Mountain Nuclear Waste Repository project in Nevada.