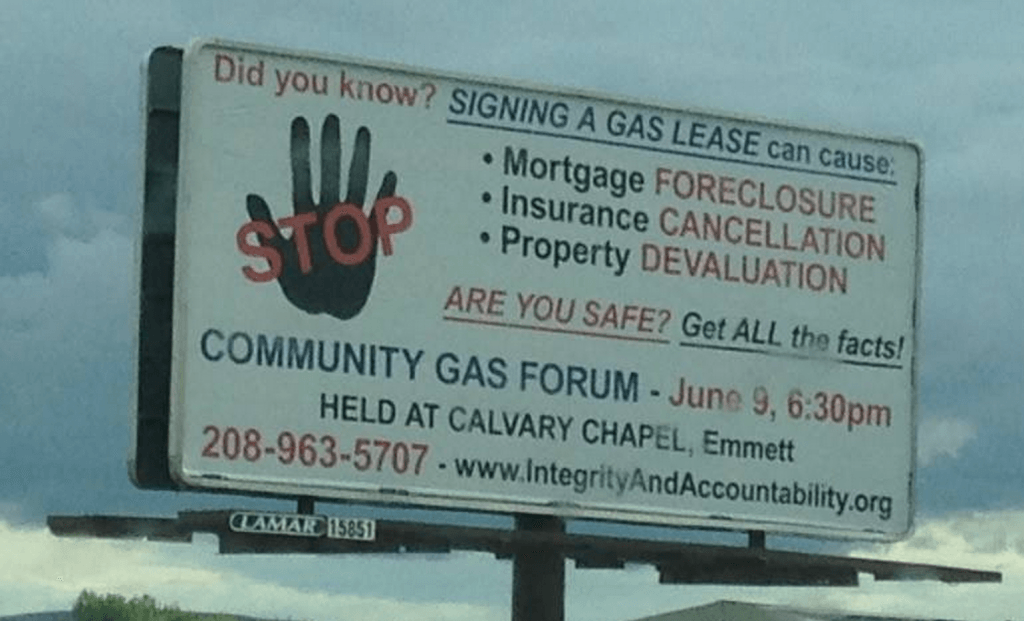 (EnviroNews Idaho) — Payette, Idaho — The non-profit groups Idaho Concerned Area Residents for the Environment (ICARE) and Citizens Allied for Integrity and Accountability (CAIA) will be hosting a town hall meeting on June 9, 2015 at the Cavalry Chapel located at 498 W Idaho Blvd, Emmett, ID 83617.

The purpose of the meeting is not only to discuss environmental concerns associated with natural gas development and fracking, but to cover the issues of mortgage default, insurance cancellation and property devaluation as well — issues ICARE and CAIA say are very real when it comes to citizens leasing away their mineral rights to natural gas drillers.

Unlike states that have been wrangling with the liquid hydrocarbon industry for decades or even a century-plus, Idaho is getting its first taste of oil and gas development and has recently formed it’s first board to regulate the industry.

In most places in America battling with the natural gas industry, fracking and environmental concerns are at the forefront. However, in Idaho, one of the reddest states in the union, several other issues have mobilized area conservatives and liberals alike.

Many would think it a strange thing to imagine far left liberals with Tea Partiers hand-in-hand fighting for a common cause against the natural gas and fracking industries, but in Idaho, that picture is shaping up as reality. While many liberals are concerned over air and water pollution, local conservatives are up in arms with what they see as an unconstitutional trampling of their property rights.

Last year, following a negotiated rule-making meeting at the Idaho state capitol, local fracking activist and ex-real estate agent Alma Hasse raised a point in an on-camera interview with local EnviroNews Idaho that raised eyebrows. According to Hasse, a person can land him or herself in mortgage default by signing a lease in cooperation with the oil and gas industry, and she says she’s got the letters from lenders to prove it.

A company by the name of Alta Mesa Idaho (AMI) has been the primary driller in Idaho and has done everything in its power to get its way through the negotiated rule-making session, and later at the 2015 state legislative session that wrapped up this April.

Critics claim that AMI has used the newness of the industry in the Gem State as an excuse, in tandem with compliant legislators and conflict-of-interest riddled local politicians, to perpetrate some of the biggest ripoffs in the country when it comes to gas leasing. It’s even been reported that minerals on state lands have even been auctioned off for less than $1 an acre in the past — a price that has informed locals shaking their heads, while AMI and others, have maneuvered their way into a position of controlling the mineral rights on thousands upon thousands of acres for little more than peanuts as compared to going rates around the country. It should also be mentioned that AMI is a company carrying a purported $350 million dollar debt with a “negative” Moody’s investor rating, elevating the level of concern among area activists even more.


Representatives of ICARE and CAIA plan to address these, and other gas lease issues at the June 9th town hall and are importing some keynote speakers to address the crowd. Among the keynotes will be Ron Gulla, Pennsylvania farmer and “Marcellus Man of the Year,” as well as Louis Meeks, Wyoming farmer and memorable personality from the HBO Josh Fox films GasLand I and GasLand II.

ICARE and CAIA say they encourage all Idahoans to join them at the event and say even workers and executives of Alta Mesa Idaho are welcome, although they say AMI employees, most of who are imported from other states, may be asked to give up their seats for actual residents if the crowd should reach capacity.