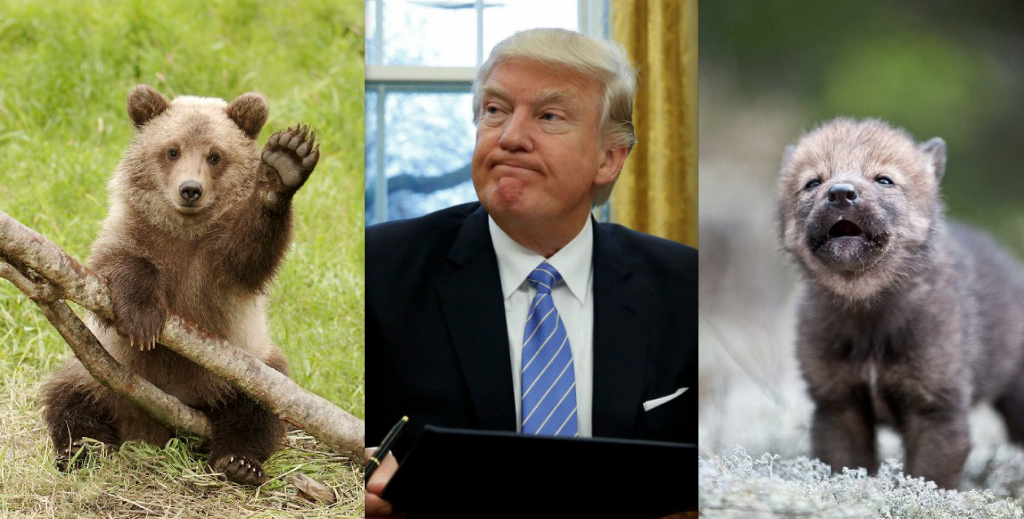 HJR 69 is a controversial bill, in part, because it rolled back Obama-era safeguards for Alaskan wildlife using an obscure law from the 90s called the Congressional Review Act (CRA) — a legislative loophole allowing a new Congress to overturn rules from the previous administration within its first 60 legislative days.

Quashing the Refuge Rule removes protections for Alaska’s iconic predators, and defaults wildlife management on Alaska’s 16 national refuges back to the state, under the Alaska Board of Game (BOG). The BOG’s wildlife management plan includes what is known as “Intensive Management” (IM), which allows wolves with pups to be gassed in their dens, bear sows with cubs to be killed, bears to be taken down with areal gunning, bears to be lured and shot pointblank at bait-stations, and steel-jaw traps to be used on black bears. All of the aforementioned vexed practices were outlawed by the Refuge Rule — but no longer.

While the BOG says it promotes these practices to keep deer, elk, moose and caribou herds at sustainable levels, when the U.S. Fish and Wildlife Service (USFWS), an ancillary arm of the Interior, implemented the Refuges Rule in late 2016, it said, “In recent years, concurrent with its adoption and implementation of [Intensive Management (IM)] plans for predation control areas, the BOG has also authorized measures under its general hunting and trapping regulations that potentially increase the take of predators to a degree that disrupts natural processes and wildlife interactions.”

“Wolf cubs shouldn’t be slaughtered in their dens on the very wildlife refuges that are meant to protect biological diversity,” said Collette Adkins, biologist and lead attorney on the case for the Center.

“It’s outrageous that Trump and congressional Republicans used this unconstitutional law to promote the senseless slaughter of some of Alaska’s most iconic wildlife. They clearly don’t care about the critical role these amazing animals play in healthy ecosystems,” Adkins continued.

“The law Trump signed earlier this month is vicious,” the Center asserted on its website. “It repeals lifesaving measures the Obama Administration put in place to protect some of Alaska’s most iconic wildlife. Trump’s new law allows wolves and their pups to be killed while asleep in their dens and bears to be caught in steel-jaw traps or shot from the air.”

The Center offered up a short video as well, displaying clips of Alaskan landscapes and wildlife edited to music. The video interweaves text snippets as well, saying things like, “With the flick of his pen, Donald Trump has struck a death blow to Alaska’s most iconic wildlife,” and, “We’re taking Trump to court to stop this cruel law.”

The Center also wrote in a post on its website, “This is no ordinary lawsuit. We’re filing a constitutional challenge to a provision that allowed Congress to ram through this law before sending it to Trump for his signature.”

What the Center is referring to is indeed the Congressional Review Act — a bill ratified on March 29, 1996, by then-President Bill Clinton, allowing a new congress to undo rules implemented by federal agencies under the previous administration by an expedited procedure. Congress has a 60-day review window to do this after a new rule is put forth, and the clock starts ticking on the 15 legislative day of the new congress. The current congress’ window will likely expire sometime in May.

Howard Crystal, Senior Attorney with the Center, explained to EnviroNews in a phone interview, that while the CRA window is 60 days going forward, it is also 60 days going backward, meaning it can target the previous administration’s rules that were finalized within the last 60 legislative days. But another language loophole in the CRA allows the current congress to target Obama-era rules at least as far back as May of 2016 because the 114th Congress had an extraordinarily short session — and all those breaks put the clock on pause while Congress was out.

Once a rule is repealed, the CRA also prohibits an agency, like USFWS, from implementing a similar rule again “unless the reissued or new rule is specifically authorized by a law enacted after the date of the joint resolution disapproving the original rule.”

In regards to the CRA, the Center’s lawsuit alleges:

Pursuant to the 1996 Congressional Review Act (the “CRA”), 5 U.S.C. §§ 801- 808, Congress recently passed a joint resolution, H.J. Res. 69, that purports to nullify the Refuges Rule. By its terms, the CRA also bars any future rules in “substantially the same form” as the Refuges Rule, without amending any laws delegating rulemaking authority to Interior. 5 U.S.C. § 801(b)(2). This constraint on future rulemaking violates the separation of powers that must be maintained between the legislative and executive branches under the U.S. Constitution.

Prior to 2017, the CRA had only ever been used successfully on one occasion, back in 2001. But since the inauguration of Donald J. Trump, Congress has used the CRA repeatedly, in a succession of eyebrow-raising moves. So far, the 115th Republican-dominated Congress has sent 13 CRA bills through to Trump’s desk — all of which the new president has signed.

Since Republicans have taken control of all branches of the U.S. Government, they’ve been going hog wild — rolling back every environment and wildlife rule and regulation in sight, and even setting their sights on the Endangered Species Act (ESA) itself. But the Center for Biological Diversity has been moving just as fast to keep up with them. To date, the Center says it has filed 11 legal actions against the Administration since Trump took office. A recent post on the Center’s Facebook page states, “Wake up. Sue Trump. Sleep. Repeat.”

If one was going to put forth a wager on who will win this lawsuit, the Center for Biological Diversity or the federal government, a person might be smart to bet on the Center. Since its inception, the NGO boasts a 93 percent success rate in wildlife cases against the federal government, and has protected by far, more imperiled wildlife species than any other environmental organization in the United States. Alongside WildEarth guardians, the Center sued the USFWS in an epic 10-year-long legal battle that finally resolved in 2011. As part of that settlement, the USFWS agreed to move forward toward protection on some 800 previously neglected species. The Center is also known not only for protecting critters and creatures, but their habitats as well, and says it has defended American wildlife habits “twice the size of California.”

MOST RECENTLY ON HJR 69 FROM ENVIRONEWS

(EnviroNews World News) – PETITION WATCH: The Center for Biological Diversity (the Center) has launched an online petition via the Care2 platform demanding Department of the Interior (Interior) Secretary Ryan Zinke “deny any request by Alaska for predator control in wildlife refuges.” This, after House Joint Resolution 69…

MORE ON HJR 69 FROM ENVIRONEWS

(EnviroNews Idaho) – Boise, Idaho – A federal judge has ordered a stop to the haphazard trapping of Canadian Lynx in Idaho. Lynx canadensis, as it is scientifically known, is one of the rarest cats in the United States and has been captured multiple times in Idaho over…