(EnviroNews DC News Bureau) — Washington D.C. — ExxonMobil (Exxon) has applied to the Treasury Department’s (Treasury) Office of Foreign Assets Control for a waiver from sanctions that currently prevent its collaboration with Russia’s state-run oil company Rosneft. Exxon’s former CEO Rex Tillerson is now Secretary of State. Exxon previously collaborated with Rosneft to explore the possibility of drilling in Russia’s arctic waters. The sanctions were put in place in 2014 after Russia annexed the Crimea region of Ukraine. [EDITOR’S NOTE: Only hours after this story broke, on April 21, 2017, the U.S. Treasury Department announced that ExxonMobil would not be awarded a waiver to conduct business with Rosneft.]

“Are they crazy?” tweeted Sen. John McCain (R-AZ), referring to Exxon’s waiver request. He is part of a bipartisan group of lawmakers who think Congress should review any proposed changes to sanctions against Russia.

“The Treasury Department should reject any waiver from sanctions which would allow ExxonMobil or any other company to resume business with prohibited Russian entities. Until Russia abides by the Minsk accords [an agreement to halt war in the Donbass region of Ukraine] and ends its illegal occupation of Crimea, the only changes to sanctions should be their intensification, not their dilution,” said Rep. Adam Schiff (D-CA), according to The Wall Street Journal. Schiff is the senior Democrat on the House Intelligence Committee, which is currently investigating Russia’s influence and role in the 2016 U.S. presidential election.

Environmentalists warn oil spills in the arctic would be catastrophic for the world’s oceans and that the area’s extreme climate would make a spill more likely and clean up more difficult. Greenpeace explains the Russian oil industry currently spills several million tons of oil into the environment every year – both offshore and on land.

Greenpeace also says while reviewing Shell’s request to drill in the Alaskan Arctic Ocean, the U.S. Department of the Interior (DOI) found there was a 75 percent chance of a major spill. In 2016, before leaving office, Obama banned new oil and gas drilling ventures in U.S. federal waters in the Atlantic and Arctic Oceans. In 2017, there have already been several gas leaks and oil spills in Alaska.

Tillerson has recused himself from any dealings related to Exxon for two years. He was confirmed Feb. 1 and it is unknown at this point whether Exxon began pursuing the waiver before or after he entered office.

Under Tillerson, Exxon entered into a 2012 deal to access and drill in the Arctic Kara Sea with Rosneft. As a test, Rosneft punched one well with an Exxon drill rig, and hit pay dirt — a highly pressurized petroleum reservoir with astronomical production potential. The companies calculated the single well could produce around 750 million barrels of oil in its lifetime. They also estimated there to be 90 billion barrels of recoverable reserves under the Kara Sea in total – more than in any of Saudi Arabia’s oilfields. 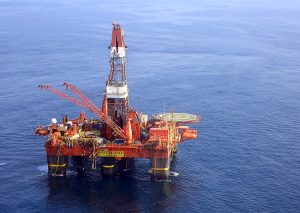 Drilling in the Kara Sea

In 2014, the sanctions were instituted and Exxon was directed to wind down its endeavors with Russian oil companies, including Gazprom, Gazprom Neft, Lukoil, Surgutneftegas and Rosneft. At Exxon’s request, the Treasury granted the company a limited extension to safely complete the already started Arctic well and remove the rig. In 2015 and 2016, the company received licenses from the Treasury allowing “limited administrative actions” with Rosneft, according to the New York Times. These would make Exxon more prepared to move quickly, if the waiver is granted.

Putin has stated previously that the two companies could invest up to $500 billion through the partnership. The 2014 sanctions that now stand in Exxon’s way prohibit U.S. business in the Arctic, Siberia and the Black Sea, as well as with Rosneft’s CEO, Igor Sechin.

Exxon says it is pursuing the waiver there because its Rosneft deal in the Black Sea, which may hold 30 billion barrels of oil, will expire and because it is also facing international competition, The Washington Post reports. Exxon would need to find Black Sea oil by the end of 2017 to obtain a drilling license from Russia. Norway’s Statoil ASA and Italy’s Eni S.p.A. are energy companies that are both pursuing drilling opportunities with Russia. Exxon has recently continued to drill in the area of Sakhalin Island, where the sanctions do not apply.