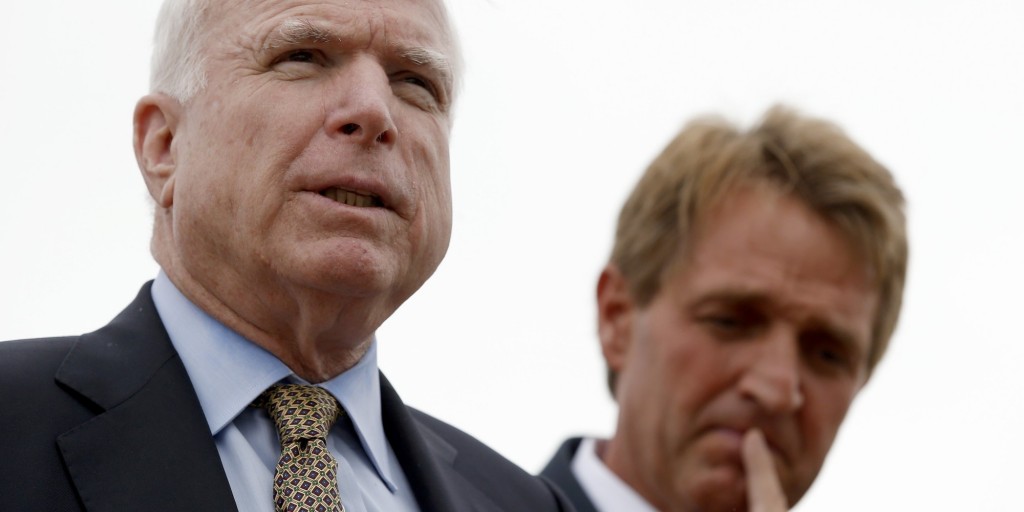 (EnviroNews World News) — Phoenix, Arizona — Well, it’s happened again. “It,” meaning the passage into law, of some unrelated, completely irrelevant deed — irrelevant that is, in relation to America’s annual National Defense Authorization Act, or NDAA — a spending bill for the U.S. Department of Defense (DOD).

This time around, Arizona Senators John McCain and Jeff Flake have teamed up to snatch and sell off national forest land that has long been sacred to the Apache people, through a slippery NDAA rider that has effectively set the stage for a land-swap — an exchange between Resolution Copper Mining, LLC, and the government — aptly named the Southeast Arizona Land Exchange.

The rider was a last minute provision slithered into the massive, must-pass, NDAA of 2015 last December — an effective political ploy used by many a politician to sneak something into code that would not otherwise pass by itself.

In fact, the swap had already been attempted out in the open as standalone legislation in the past by Arizona legislators, and had fallen flat in the face of an executive protective order from the 1950s every time. The provision however, successfully accomplished the land sale in backdoor fashion, and involves Resolution handing over about 5,300 acres of private land to the Forest Service in return for the right to mine the 2,400 acres in question.

Considering the careers, benefactors and campaign contributors of McCain and Flake, it is not surprising to see the Rio Tinto gift arise in the defense bill at all. Reverb Press reports, “John McCain just happens to be Congress’ largest recipient of campaign contributions from Rio Tinto. Jeff Flake’s piece of the puzzle? He was once a paid lobbyist for Rio Tinto. Is anyone surprised by these revelations?”

Resolution, is a subsidiary of transnational UK-based mining giant Rio Tinto — a company worth over $100bn dollars and riddled with controversy — more on that in a few paragraphs.

Earthworks also reports the company is owned and parented in part by Australian behemoth BHP Billiton, and that BHP Billiton and Rio Tinto are the first and second largest strip-mining Goliaths in the world respectively.

An ancient and beautiful Apache holy site is about to be handed off to a foreign mining company, thanks to Republican Sens. John McCain and Jeff Flake. What will be left behind, when the company is through, is a caved-in pit, 1,000 feet deep and two-miles wide.

The place sitting smack-dab in the heart of the bullseye in this story is Chi’Chil’Bilda’Goteel — or Oak Flat as it’s known in English — a sacred Apache burial ground and ceremonial site. Congressional testimony by the Society for American Archeology said that Apache have been occupying the space “since well before recorded history.” In 1955, President Dwight Eisenhower declared the area protected — a definite monkeywrench for companies like Resolution Copper Mining that have wanted to get their paws on the large quantities of precious ore known to be sequestered beneath the sacred site. An around-the-clock encampment has been under way for several months where participants have been camping out in protest and to send a message that they are ready to fight to save Oak Flat. The movement also has a website titled Apache Stronghold where the public can receive updates about the ongoing effort. The homepage of the site bears these words by Wendsler Nosie Sr. — long time opponent of Southeast Arizona Land Exchange and Councilman of the San Carlos Apache Tribe:

The greatest sin of the World has been enacted by Senator McCain, Senator Flake, Representatives Kirkpatrick and Gosar of Arizona by including the Southeast Arizona Land Exchange in the National Defense Authorization Act. We are calling on all religious faiths, & military veterans, for this country was founded on freedom of speech, religion and worship which has been given away to a foreign mining company. They declared war on our religion, we must stand in unity and fight to the very end, for this is a holy war.

Lydia Millett, Contributing Op-Ed Writer for the New York Times recently wrote this in her piece about Oak Flats:

The land grab was sneakily anti-democratic even by congressional standards… If Oak Flat were a Christian holy site, or for that matter Jewish or Muslim, no senator who wished to remain in office would dare to sneak a backdoor deal for its destruction into a spending bill — no matter what mining-company profits or jobs might result. But this is Indian religion. Clearly the Arizona congressional delegation isn’t afraid of a couple of million conquered natives.

Rio Tinto is no newcomer in the arena of steamrolling over the rights and wishes of indigenous people, and their sacred lands. In a lawsuit from 2000, Rio Tinto was sued for genocide and high war crimes on Bougainville Island in the country of Papua New Guinea, after violence erupted over what was once the world’s most massive copper mine.

At the time of the revolt, about twenty percent of the total revenue from the mine was payed as royalty to the government of Papua New Guinea — the tribe, who owned the land the mine was on, was getting about one percent.

The lawsuit claimed Rio Tinto instigated a civil war by paying off and directing the government of Papua New Guinea to slaughter at least 10,000, and possibly as many as 20,000 Bougainvilleans, after local tribesmen blew up power pylons at the mine in an effort to shut it down. That effort was successful — the mine was shut down — and many locals gave their lives to keep it that way.

A documentary put out in 2011 by SBS Australia stated:

What hasn’t been revealed until now is the powerful support the people of Bougainville had when they launched their class action — none other than Papua New Guinea’s Prime Minister Sir Michael Somare — providing the court with this sworn affidavit — alleging that it was Rio Tinto that was calling the shots during the Bougainville war — forcing the PNG government to launch the blockade of the island — and the military action — in order to reopen the mine.

Judge Mary Schroeder said in a written statement regarding that case, “The complaint alleges purposeful conduct undertaken by Rio Tinto with the intent to assist in the commission of violence, injury, and death, to the degree necessary to keep its mines open,”.

To the enragement of many, in June of 2013, after nearly a decade-and-a-half of legal battles, Rio Tinto was let off the hook in the case — leaving many Bougainvillean families affected by the conflict further dismayed.

What the Future Holds for Oak Flat and the Apache

Although the off-the-wall 2015 NDAA rider paved the way for the land-swap, it would seem the battle at Oak Flat is far from over.

Considering the fighting spirit and history of the apache, it is probably safe to say the 24/7 encampment rolling there now is almost sure to meet any mining efforts head-to-head should any occur in the near future. The minerals from under the earth at Oak Flat are not yet mined, and the battle is far from over as a full Environmental Impact Statement (EIS) must be written and then approved — a process that will surely take years.

It also seems likely that this land-swap provision could be challenged in court. Even then, other legislation could be proposed to repeal it. [Editor’s Note: Since the release of this article, Representative Raul Grijalva has proposed legislation to repeal the language. See Tweet below.]

If one thing is for certain it’s that the Apache are historically, and to this day, a very tough and resilient people, and it doesn’t look like they plan on giving up without one helluva fight.