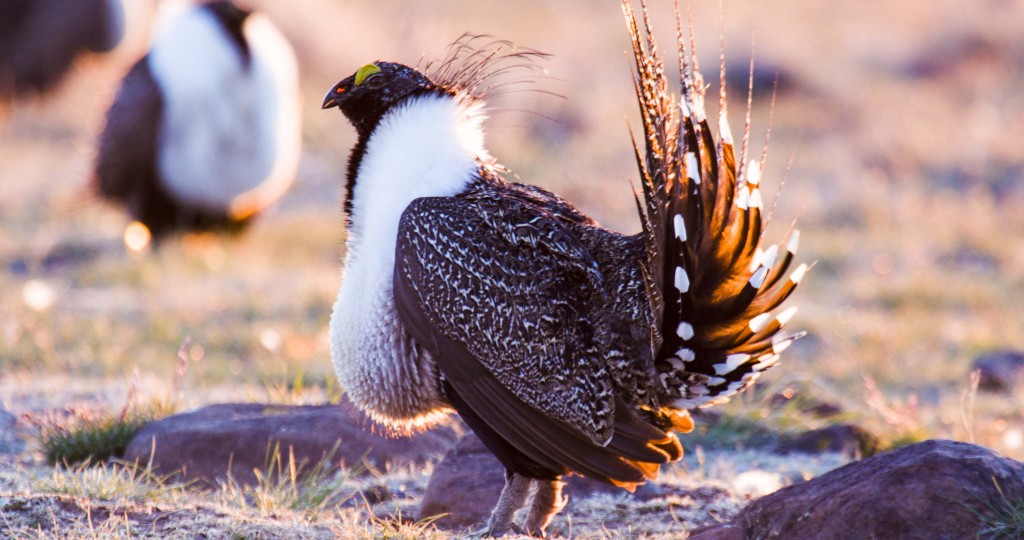 (EnviroNews DC News Bureau) — Washington DC — In a surprising environmentally-friendly move today following the Department of the Interior’s green light for Shell Oil Company’s arctic drilling ambitions yesterday, the Obama Administration came out against a controversial rider in the 2015 National Defense Authorization Act (NDAA) that seeks to block the U.S. Fish and Wildlife Service (USFWS) from making a decision on whether or not to protect the greater sage grouse under the Endangered Species Act (ESA) until 2025. USFWS is currently under a looming court order to make a decision on the bird’s listing by September 30th of this year.

Section 2862 of this year’s NDAA, authored by Republican Representative Rob Bishop of Utah, has received criticism for being completely irrelevant in every possible way to anything defense-spending-related.

Legislative riders, by their very historical nature, have typically sought to sneak political modus operandi into larger unrelated bills in situations where the agenda at hand would have little to zero chance of passing on its own — and according to today’s Statement of Administration Policy, Bishop’s sage grouse rider is no different in those regards.

The NDAA has been a historic haven for sneaky riders, and politicians have tried to convolute the annual defense bill with nearly every irrelevant agenda you can think of over the years. Most noteworthy was the “indefinite detention” provision in the NDAA of 2012 authored by John McCain and Carl Levin that left many feeling as if the constitution had just been reduced to a pile of rubble. The greater sage grouse, labeled here at EnviroNews as the “monkeywrencher bird,” has practically every special interest group imaginable opposing a protective listing under the ESA — all because federal protection would adversely affect their industrial bottom lines. Big oil, gas, coal, mining, ranching, nuclear and timber just to name a few, have been frantically attempting to micromanage the birds home-place in the “sage brush sea,” in a desperate effort to convince USFWS that everything is perfectly well with the grouse, and that surely it requires no protection at all — this, despite the fact that an overwhelming biological consensus shows that the flamboyant strutting bird is in serious trouble.

A Pew Charitable Services report released in late April has added to the voluntary micromanagement frenzy as the document demonstrates a 98.7 percent chance that the bird will blink out completely in Wyoming’s Powder River Basin if drastic measures are not taken to ensure habitat protection. The Powder River Basin is the main hub for sage grouse, and the Pew analysis pointed to massive population declines in recent years which has all hands on deck scrambling in an effort to keep the bird off the ESA.

In Representative Bishop’s home state of Utah, it is estimated that an endangered listing could cost the state $41 billion dollars in oil revenues alone. Is the EnviroNews “monkeywrencher bird” nickname becoming any clearer yet?

Although the pressure is certainly strong for USFWS to not list the bird, the White House decided today to not cave into the lobby where the future of sage grouse is concerned. In this particular case, Obama has apparently decided that he intends to let the science, not special interest groups drive the decision. The Administration’s statement regarding the controversial sage grouse provision is below:

The Administration strongly objects to section 2862, which would mandate a delay until 2025 in listing or deciding not to list the Greater Sage-Grouse under the Endangered Species Act and would effectively override longstanding principles of major Federal land management statues, including the Federal Land Policy and Management Act and the National Forest Management Act. Such unprecedented delays undermine science-based decision-making, are unnecessary for military readiness, and are ill-advised for purposes of public land management. Such delays create uncertainty for landowners and businesses, and effectively suspend unprecedented collaborative conservation efforts that have been developed with extensive public input. Additional provisions would divest stewardship of Federal land from Federal agencies, requiring these lands to be managed consistent with State-approved management plans. Moreover, existing law already allows the Secretary of Defense to obtain an exemption of any action from the requirements of the Endangered Species Act for reasons of national security.