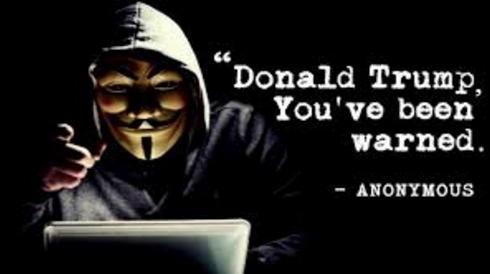 (EnviroNews USA Headline News Desk) — A few days before President Trump’s inauguration, the hacktivist group Anonymous threatened him through one of its Twitter accounts, @YourAnonCentral. Anonymous members sent out the stream of threatening tweets in response to Trump’s tweet suggesting outgoing CIA Director John Brennan may have leaked the controversial, compromising and unverified report on Trump, which he calls “fake news.”

The threats alluded to upcoming disclosures of damaging information about Trump, saying the nonpartisan attack was going to be carried out because he is into “some really heavy shit.”

We could care less about Democrats attacking you @realDonaldTrump, the fact of the matter is, you are implicated in some really heavy shit.

.@realDonaldTrump you have financial and personal ties with Russian mobsters, child traffickers, and money launderers.

Trump was also told he would “regret the next four years” because unlike in the 80s, “information doesn’t vanish.”

This isn't the 80's any longer, information doesn't vanish, it is all out there. You are going to regret the next 4 years. @realDonaldTrump

The disappearance and manipulation of information is an interesting point to bring up at this juncture because after Trump’s inauguration, Press Secretary Sean Spicer publicly lied about the sizes of the crowds and criticized the media for reporting them inaccurately, saying that he would “hold the press accountable.” The American Civil Liberties Union (ACLU) quickly responded, tweeting, “If Trump wants to take on the First Amendment, we’ll see him in court.”

Meanwhile, scientists are working to compile and protect scientific data under the new U.S. administration, which is staffed with both climate change deniers and oil and gas allies. The White House climate change website was taken down after Trump’s inauguration. Luckily, the Internet archive site, the Wayback Machine, archives web history. The website recently announced it plans to move its servers to Canada in response to Trump’s election. 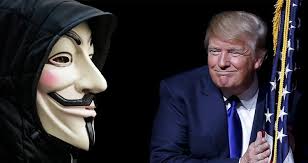 Anonymous’ previous victims have included an ISIS website, the Church of Scientology, and the World Trade Organization (WTO). It will be interesting to see what unfolds from Anonymous’ threats because it also declared war on Trump before the election, with little result. Instead, the WikiLeaks campaign, which focused on Hillary Clinton’s emails and had potential ties to Russian officials, took center stage.

Representatives from @YourAnonNews, another popular Anonymous account, told VICE News, “We believe that major Anonymous operations simply did not take place because of the divide of the collective on the political spectrums. The U.S. election pitted friend against friend, mother against son. It did the same within Anonymous as many activists became caught up in the debate instead of remaining true and steady against the establishment.”