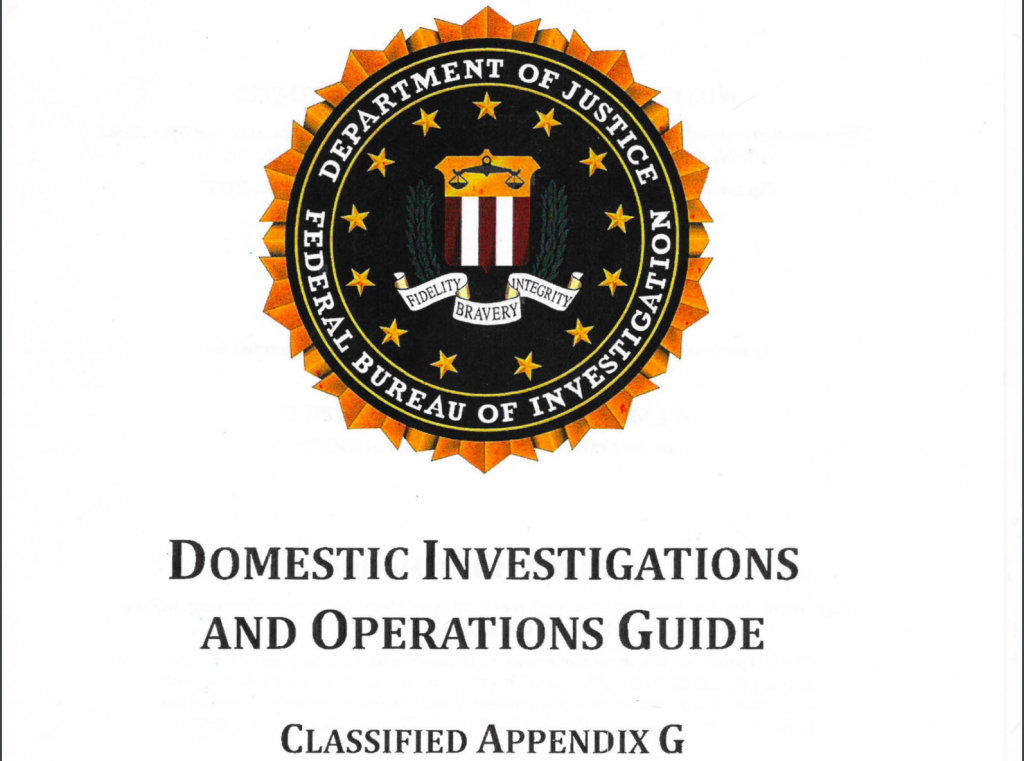 (EnviroNews DC News Bureau) — EDITORIAL: EnviroNews, across the board, in its various bureaus and divisions, reports primarily on the environment, energy, health, nature and wildlife — but not exclusively on those topics. We do cover stories in other areas of high importance — when the situation calls for it. In particular, EnviroNews and it’s ancillary divisions, keep a close watch on government overreach, as well as abuses on journalists, journalism, free speech, and the First Amendment in general.

With that stated, it is the opinion of the EnviroNews USA Editorial Board that the recently uncovered secret Federal Bureau of Investigation (FBI) rules allowing the Agency to spy on journalists with little obstruction at all, are outrageous and an outright assault on the integrity of the U.S. democracy. Here’s why:

In an article published June 30, 2016, Corra Currier of The Intercept shone light on a “classified” appendix in a set of FBI rules guiding the Agency’s policy toward National Security Letters (NSL). Dated October of 2013, the appendix, released previously only in a heavily redacted form, grants the Agency power to obtain phone records of journalists without going in front of a grand jury or through the courts, and paves the way for spying on members of the press as long as two FBI officials sign off. Additionally, the rule allows the Agency to obtain the transmissions of reporters without notifying the news agency being targeted. “Absolute power corrupts absolutely,” as the cliche’ goes, and this enabling rule gives unfettered permission for the fox to guard the henhouse.

The annex in question emanates from an FBI operating manual known as the Domestic Investigations and Operations Guide (DIOG) — a rulebook that was last made public in 2011 — in redacted form of course.

Bruce Brown, Executive Director of the Reporters Committee for the Freedom of the Press Foundation, said “use of NSLs as a way around the protections in the [DOJ] guidelines is a serious concern for news organizations.” EnviroNews agrees.

In 2013, a federal judge ruled NSLs were an unconstitutional violation of the First Amendment, but that decision is currently on appeal.

Furthermore, the DOJ Inspector General has said the FBI’s uses of “exigent letters,” are “not authorized by any law, flouted internal FBI policy, and violated Attorney General guidelines,” according to Freedom of the Press. Exigent letters are informal information demands the FBI uses to obtain data for investigations. The Inspector General also determined the FBI had used exigent letters to obtain phone records of New York Times and Washington Post reporters.

The Freedom of the Press Foundation filed a lawsuit in federal court on July 30, 2015 suing the Department of Justice (DOJ) for its secret use of NSLs against journalists. The outcome in the case is yet to be seen.

Journalism — Without It, Democracy Dies A Slow Death

In the U.S., the news sector is as old as the government itself, and although it is technically an “industry,” it serves a special role — a function so vital that journalism acts in essence like a balancing fourth branch of government. Indeed, the Founding Fathers even took care to afford the media special protection under the Constitution — to empower it as a watchdog over the “grand experiment.”

The Seattle Times wrote in an editorial back in 2007, “The press — newspapers, radio, television and magazines — plays a role in democracy every bit as important as Congress, the executive branch, and the judiciary.” At EnviroNews, we couldn’t agree more.

One of the root purposes of journalism is to keep individuals, corporations, politicians, and the government at large honest.

The code of ethics is very strict for journalist (at least it is at EnviroNews). One of the highest duties of a journalist is to create a safe harbor for sources and whistleblowers — and that is one of the highest purposes an investigative reporter can fulfill in his or her role — keeping their sources secret and safe.

In order to do this, confidentiality and privacy are essential. It is difficult enough for reporters to keep sensitive information under lock and key as it is, in today’s technology-driven atmosphere, without the fear of a taxpayer-funded “Big Brother” hacking into and spying on their every move.

FBI spying on reporters poses a great threat to journalism — and to the American democracy, and will make correspondents and whistleblowers with sensitive information even more reluctant to come forward with the truth. These rules must not be allowed to persist, and should be nullified as soon as possible.

ANYTHING GOES: National Security As An Excuse For Anything and Everything

If the U.S. Government doesn’t want to be seen and labeled as “Big Brother” from George Orwell’s Nineteen Eighty-Four, then it should stop acting like it. Things like these rules, in tandem with moves like assembling the bafflingly massive “NSA Spy Center” in Bluffdale, Utah, are leaving a bad taste in people’s mouths across the country and causing a larger rift of distrust between the government and the people.

Since the 9-11-01 attacks on the Pentagon and the World Trade Center, multiple pieces of legislation, including the Patriot Act, have loosened the rules when it comes to government surveillance. While most Americans appreciate the government keeping them safe from terrorist threats, they don’t appreciate having every phone call, email and text message recorded, stored, and data-mined at a shady NSA “spy center” with countless yottabites of hard drive space in the boondocks in Utah.

Similarly, since 9-11, several moves by agencies within the federal government, including the aforementioned classified FBI rules governing NSLs, have allowed spying on journalists to happen unchecked. This government overreach must be reigned in.

If the integrity of journalism isn’t intact, the American democracy stands to suffer greatly.

A Message From EnviroNews To The FBI

In addition to the editorial above, below is a statement from the EnviroNews USA Editorial Board to the FBI:

Respect the Constitution and the First Amendment. Respect Reporter’s Privilege and state shield laws — the same laws upheld many times by many judges across many courts including the First, Second, Third, Fifth, Eighth, Ninth, Tenth, Eleventh, and D.C. Circuits. Play by the rules, even when actual investigative police work is difficult. The rules are in place for good reason. And lastly, keep your mitts off our reporters and our transmissions, and again, uphold the First Amendment and Reporter’s Privilege everywhere. Thank you in advance for respecting the Constitution and the American democracy many still hold dear.