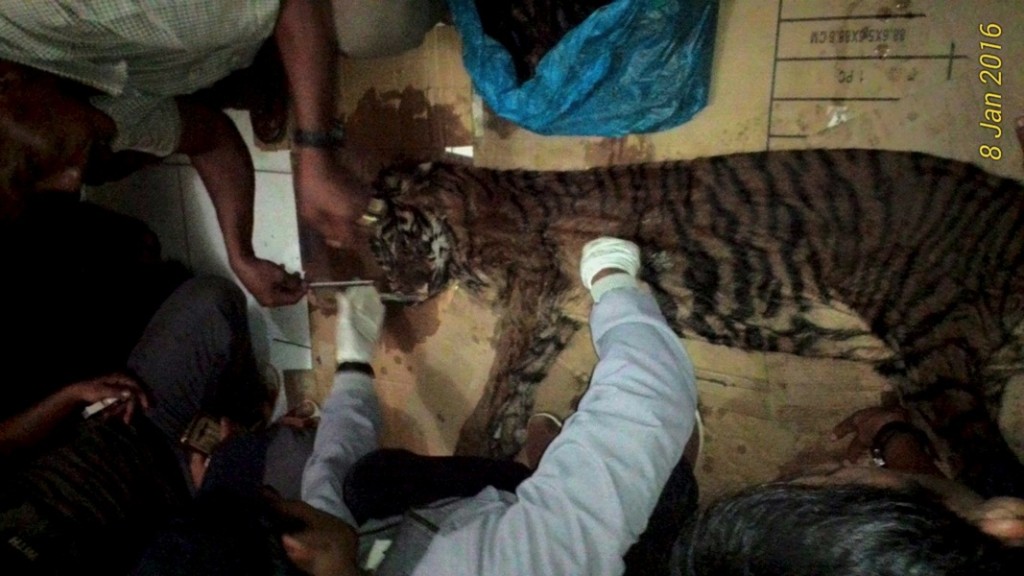 (EnviroNews World News) — Mukomuko, Bengkulu — Sumatra, Indonesia — It has been reported from the ground that two Sumatran tiger poachers were taken down by local police in a sting operation in the southwestern provence of Bengkulu, Sumatra, on January 8, 2016.

The two men accused of the wildlife banditry were said to preside over the most prominent tiger-poaching ring in the Mokomuko area, and are known to the public only as “AA” and “ZS” at this time.

Police also told Mongabay they had been building a case against the men for years, but previously lacked adequate evidence to arrest them — but all that changed when undercover officers, posing as buyers, were able to purchase tiger skins, bones and teeth.

According to Hendry’s original report, members of the Kerinici Seblat National Park anti-poaching squad, teamed up with police in the operation.

Hendry reports the group moved from a crowded restaurant to a hotel room, where on the way, the accused wildlife thugs were “shown the money” — 60 million rupiah, or about $4,300 USD. Upon arriving at the hotel, a courier delivered the prized tiger parts. Shortly thereafter the arrests were made. The current status of the legal proceedings against “AA” and “ZS” are unknown to EnviroNews World News at this time.


Only last October, another raid by local police in Jambi, brought down a Sumatran tiger poaching ring there, when three men were arrested and accused of the same crime — selling poached tiger skins.

As is the case with rhino horns, bear gallbladder and elephant tusks, the Chinese lust for forbidden animal parts drives the illegal Sumatran tiger trade. The skins are seen as a symbol of status by the Chinese, while other parts of the cat, like the bones and genitals, are used in Traditional Chinese Medicine (TCM).


The Sumatran tiger, or Panthera tigris sumatrae as it is scientifically know, is listed as “critically endangered” by the International Union for Conservation of Nature (IUCN) — the highest risk-category for an imperiled species on the organization’s “Red List.” Less than 400 of the creatures are believed to remain in the wild, according to the World Wildlife Fund (WWF), and IUCN.

In his article, Hendry stated, “Only 163 Sumatran tigers are thought to remain in Bengkulu’s Kerinci Seblat National Park.”

The WWF states on its website, “The island of Sumatra is the only place where tigers, rhinos, orangutans and elephants live together. The presence of the Sumatran tiger is an important indicator of a forest’s biodiversity.”

Conservationists have been working diligently in an effort to keep the Sumatran tiger from disappearing completely like its two relatives — the Javan tiger and the Bali tiger.


Both of those species were plundered to extinction in the twentieth century, with the Bali tiger blinking out by the 1950s, and the Javan tiger disappearing completely by the mid-70s.

With poaching and myriad other assaults on the Sumatran tiger’s habitat, wildlife lovers and onlookers are left to hope conservation and law enforcement efforts will be enough to keep this stripy creature from going the way of the Javan and Bali tigers — totally extinct. Perhaps more busts like the one carried out by police this month in Mukomuko will help the critically imperiled species survive.

1 thought on “BUSTED! Tiger Poaching Ring Taken Down in Sumatra”