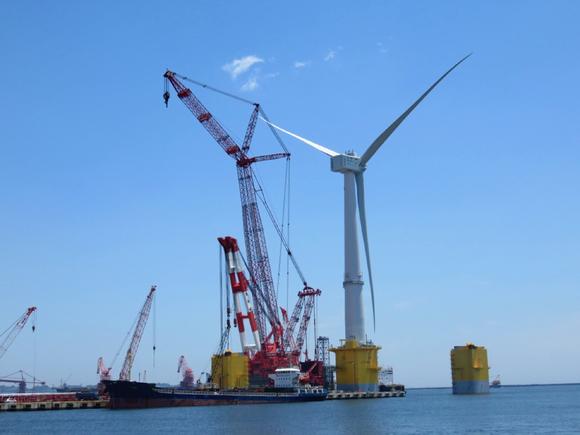 The world’s largest floating wind turbine has three 270 foot long blades, can withstand 200 mile-per-hour winds, and will be able to generate “up to 7 megawatts of electricity,” making it the biggest offshore wind turbine on earth, according to Gizmodo, a popular science and technology blog.


The project is backed by the Japanese government to the tune of $400 million dollars and is ultimately slated to contain three of the simply gigantic wind towers. The construction of the turbines is being carried out by 11 of Japan’s most prominent universities and corporations — organizations such as Mitsubishi, Hitachi, and the University of Tokyo.

In fairness, petition campaigns have been circulated around the web in the past that have aimed to make Hitachi actually pay for a share of the damages from the unprecedented nuclear disaster — expenses that have now soared into the hundreds of billions of dollars. A Greenpeace petition from 2013 said Hitachi, Toshiba and General Electric (GE) all need to be held accountable as engineers and service providers of the now epically demolished power plant.


The 2011 nightmare in Fukushima has not been contained in any meaningful way, and is ongoing to this very day. Experts predict it could take as long as a century to fully clean up and decommission the tattered facility, but all those efforts do nothing to mitigate the present and future danger to all life on earth from the incalculable amounts of deadly radiation, already released from the ever-spewing nuclear dragon.

Fukushima Daiichi was once the world’s tenth largest nuclear power plant — a massive sprawl of turbines, reactor buildings and endless other industrial workings on Japan’s northeastern coast. But because three of the six cores breeched their containment vessels completely in the days following the tsunami and subsequent explosion, and ran wild into groundwater aquifers flowing directly downstream and out to sea, the crippled plant has been leaching cesiums, strontium, uranium, plutonium and other deadly isotopes into the Pacific from the onset — and what’s worse — on a daily, and continual basis.

The melt-throughs ultimately occurred due to a lack of safety systems to avert massive tsunami wave damage. This resulted in coolant system failure, and completely melted cores in reactors 1,2 and 3 — but unlike Chernobyl where 600,000 human “bio-robots” and “liquidators” stopped the cores within the containment structure with the application of lead, sand and boric acid — the molten blobs — containing enough radiation to wipe out most all life on the planet if distributed effectively, ran freely and unfettered underneath the earth on the Japanese coast.

As mentioned above, the cores not only melted down, but melted all the way through — breaching containment in a China-Syndrome-like scenario wherein molten radioactive cores ran wildly out of the barn — into groundwater sources, and deep into the earth into places still unknown. One of those reactors, unit 3, was itself a plutonium-fueled reactor, contributing further to what should now be recognized as the worst manmade environmental catastrophe in history.


Watching the simply massive windmill spin it’s blades for the first time on Monday, June 22, 2015, represented a glimmer of hope for some, in a devastated community, torn to shreds by both the tsunami and subsequent radioactive fallout. The gargantuan towering turbine serves as a green energy beacon in a place desperate for a new beginning.

With nuclear power now highly unpopular and the majority of the country’s nuclear power plants still offline following the Fukushima crisis, perhaps it is a good time for Japan to think more about innovations like this wind farm, and less about deadly dangerous and outdated technologies like the boiling water nuclear reactor.