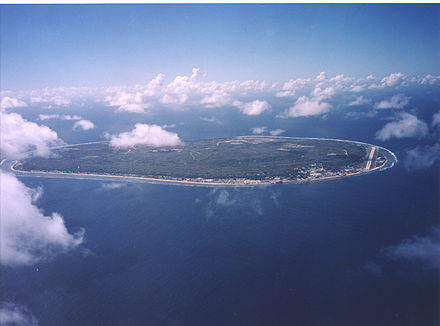 (EnviroNews World News) — Nauru — A worldwide petition has been launched by the Nauriana International Project imploring the General Assembly of the United Nations (UN) to forge a rescue plan for 10,000 people on the island of Nauru, previously know as “Pleasant Island.”

The South Pacific island is home to people of Micronesian and Polynesian descent, and is one of the tiniest countries on earth. Only Monaco and Vatican City are said to be smaller in land size, as the world’s independent states go.


Nauru had been pillaged for phosphate deposits from the 1950s onward, and for a brief period in the 60s and 70s boasted the highest per capita income of any country on earth. However, that good fortune ran out when the mineral that had once enriched the economy became uneconomically viable to extract by 2011. Nowadays, most Nauruans are unemployed.

Many people have never heard of this tiny country, but make no mistake, it’s got a lot of history. In fact, it is considered to be over 3,000 years old and also has its own language. The island was once covered with a dense and pristine rainforest where the natives lived, but that all ended with the phosphate boom. Now the inhabitants live on only a thin strip of coastline — a strip that is vanishing fast.

What remains of Nauru today is a badly pillaged and destroyed limestone rock, only 8.1 square miles in size, that holds nearly 10,000 people. And now, as a result of climate change, what’s left of the island is disappearing fast into the rising Pacific. Still, despite the environmentally dire state of the terrain, residents love and take pride in their country — but, those citizens may need to leave and never return if events continue on the current course, and that stark reality is what prompted the Nauriana Project to launch the petition — a plea that aims to compel the UN to action.

Nauru has other problems too. Since the crash-and-burn collapse of the phosphate industry, the country holds itself up largely off of Australian grants for a highly controversial, Guantanamo Bay-like, detention facility maintained there by the Aussies.


Last month, in historic fashion, six tiny island nations announced their plan to sue Big Oil for having disrupted the climate. The announcement came in Vanatua on June 8, 2015 — the same day the G7, composed of the world’s seven most powerful countries, announced it would put an end to carbon burning by 2100 — not fast enough as far as Vanuatu, Kiribati, Tuvalu, Fiji, Solomon Islands and the Philippines were concerned.

Some of those countries like Kiribati and Tuvalu, along with other small island nations like the Marshall Islands, are predicted to submerge entirely within the next century — an event that would surely alter the course of history, and create hundreds of thousands of climate refugees.

The petition by Nauriana International Project is simple in nature and asks clearly for two things: (1) that a special commission be formed by the UN to investigate the massive ecological and humanitarian crisis currently crippling Nauru, and (2) that the UN General Assembly concoct an emergency evacuation plan for the residents of the imperiled island — a proud and tradition-filled nation that even has its own Olympic team.

The petition to save Nauru can be viewed in its entirety at this link: https://www.gopetition.com/petitions/nauru-is-sinking-save-the-smallest-island-country.html