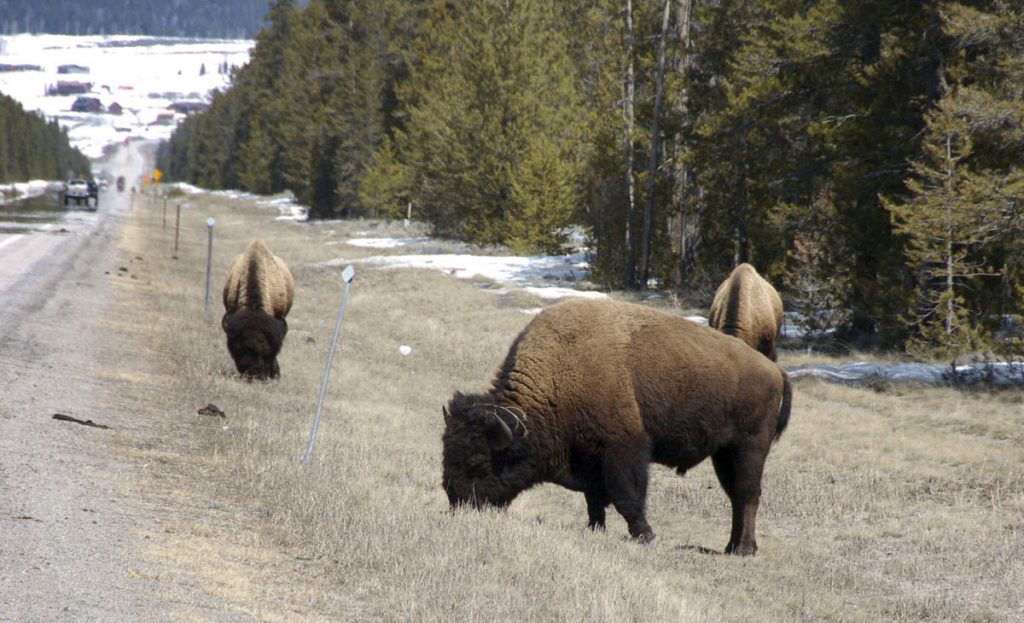 (EnviroNews Wyoming) — The Wyoming Game and Fish Department (WGF) has sanctioned an upcoming bison hunt on the North Fork because the area’s population has skyrocketed to a whopping 18 animals. There will be two tags available for resident hunters and one tag for non-residents, making a grand total of three animals to be culled. The state’s preferred number of bison for the area is 15.

“The second Wyoming has just a few animals over their ‘goal,’ they start killing,” said Bethany Cotton, Wildlife Program Director at WildEarth Guardians (Guardians), in an email to EnviroNews.

The bison season will run from September 1 to November 1, 2018. Many residents in the North Fork area do not like the buffalo because they can destroy fences and be a road hazard.

At a meeting at Big Horn Federal Savings Bank on March 24, WGF biologist Tony Mong from Cody Region, said when a vehicle hits a 1500-pound bison, “it’s a mess.” The buffalo on the North Fork are older males “who got tired of the fast pace of living in Yellowstone.” According to Mong, “they’re older bulls kind of living on their own.” This will be the first time “in recent memory” people will be able to hunt bison in the North Fork.

Ranchers also fear the bison carry disease that may be contagious to their cattle. As EnviroNews reported earlier this year, there are no documented cases of brucellosis being transmitted from bison to cattle in the wild.

Wyoming has also announced grizzly bear hunts for 2018 — the first such hunt in over 40 years. Hunters will be allowed to kill 10 male and 2 female grizzlies in the tri-state Demographic Monitoring Area (DMA) in the Yellowstone region, and an additional 12 grizzlies outside that area. The Cowboy State will allow the hunting of grey wolves again this year too. Idaho, another state in the DMA, is currently considering opening hunting season for just one male grizzly bear.

The American bison (bison bison) is the state mammal for Wyoming and the U.S. National mammal. Tens of millions of bison once roamed the American prairies. Now, they are only found in the wild in a few places with about 5,000 specimens spanning two different herds in the Yellowstone area.

(EnviroNews Idaho) – Boise, Idaho – On March 22, 2018, Idaho’s Fish and Game Commission voted unanimously to direct the Department of Fish and Game (IDFG) to collect comments on a proposed grizzly bear hunting season. Idaho would allow all hunters together to shoot a grand total of…

(EnviroNews Wyoming) – In what wildlife and conservation organizations are calling a “fantastic victory,” on Feb. 1, 2018, Federal Judge Christopher Cooper ruled U.S. wildlife officials must reconsider their 2015 decision to deny Yellowstone bison protections under the Endangered Species Act (ESA). According to the opinion written by…

(EnviroNews Arizona) – North Rim, Arizona – The U.S. National Park Service (NPS) gave its final approval this month for a bison (Bison bison) hunt and relocation program that would drastically thin a 600-animal herd, residing in the park’s North Rim, to less than 200 by next year….