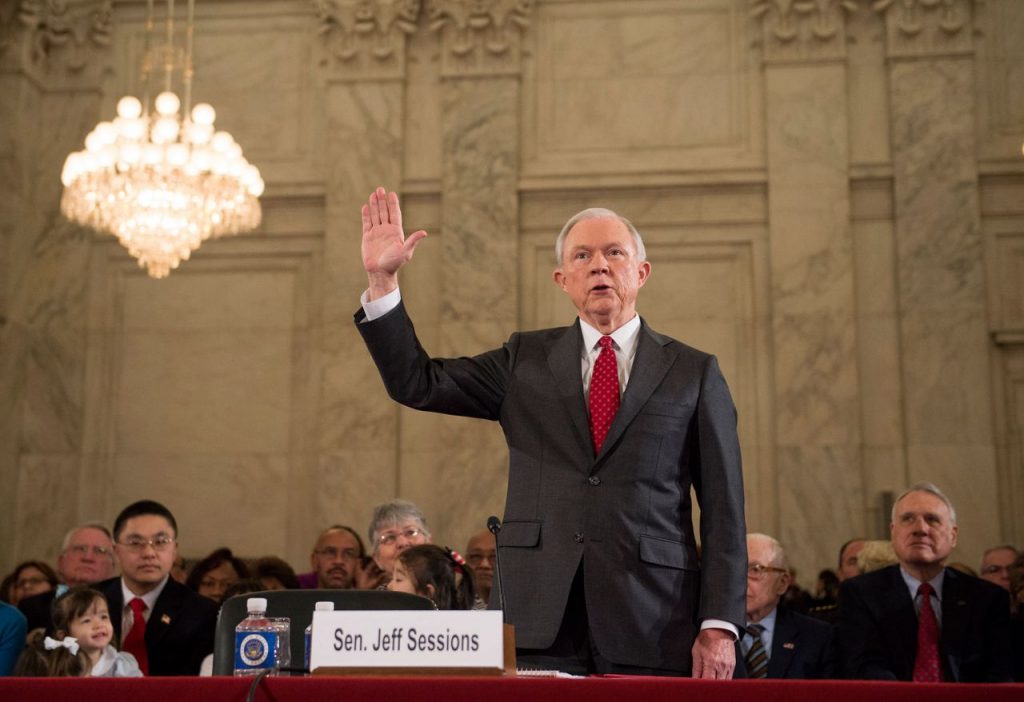 On January 10, 2017, at then-Senator Sessions’ confirmation hearing before the same Senate Judiciary Committee, in an exchange that has since been looped countless times on network television, Senator Al Franken (D-MN) asked Sessions:

Franken: CNN just published a story alleging that the intelligence community provided documents to the President-elect last week that included information that quote, “Russian operatives claimed to have compromising personal and financial information about Mr. Trump.” These documents also allegedly say quote, “There was a continuing exchange of information during the campaign between Trump’s surrogates and intermediaries for the Russian government.”

Now, again, I’m telling you this as it’s coming out, so you know. But if it’s true, it’s obviously extremely serious and if there is any evidence that anyone affiliated with the Trump campaign communicated with the Russian government in the course of this campaign, what will you do?

Sessions: Senator Franken, I’m not aware of any of those activities. I have been called a surrogate at a time or two in that campaign and I didn’t have — did not have communications with the Russians, and I’m unable to comment on it.

What ensued following that exchange sparked a media firestorm that is still roaring, after it was discovered that Sessions met twice with Russian Ambassador Sergey Kislyak — once in a one-on-one meeting in his office, and once at the Republican National Convention last summer.

After the meetings were revealed, Sessions, in a press conference, in what some called a “knee-jerk reaction,” recused himself from all investigations involving the Russians, after several Republican colleagues including Rep. Darrell Issa (R-CA) and Rep. Jason Chaffetz (R-UT) said he should. Sources close to President Donald Trump reported the President was furious over his new AG’s recusal.

Session has since denied any wrongdoing. PolitiFact reported, “Sessions and spokeswoman Sarah Isgur Flores have said his statement was truthful because he met with the Russian ambassador in his capacity as a senator, not as a Trump campaign surrogate.” But many are not buying that explanation in the slightest.

In Rosenstein’s March 7 hearing, Franken demanded of Chairman Sen. Chuck Grassley (R-IA) that Sessions be summoned to appear again in front of the committee to “explain himself” after Franken read remarks from a letter from Sessions wherein the new AG denied even being asked about meeting with the Russians. But Grassley shut Franken down and refused to call Sessions back to appear, accusing the Minnesota Democrat of blindsiding Sessions with a “gotcha question.” To which Franken replied, “It was not a gotcha question.”

After the hearing, Franken went on CNN with Jake Tapper, and straight up accused AG Sessions of the P-word — perjury. The exchange was as follows:

Tapper: It came out that he had actually met with the Russian Ambassador twice, although he said he did so in his capacity as a Senator not as a campaign surrogate. President Trump even went on to say that Sessions “could have stated his response more accurately.” Sessions yesterday, amended his remarks to the committee saying that his answer was correct and that he “did not mention communications [he] had with the Russian Ambassador over the years because the question did not ask about them.” What’s your response sir?

Franken: That’s a ridiculous response — it’s not a clarification at all. Of course the question didn’t ask about the Russian Ambassador — I didn’t ask him [that]; he answered a question that he asked himself, which is: did I meet with any Russians? — and he answered it falsely. He said, “No, I haven’t.” So, this response, listen, I’ve been cutting him a lot of slack. I’ve been refusing to say he lied, I’ve wanted to wait for this letter to come out. It’s hard to come to any other conclusion, than he just perjured himself.

Senator Al Franken may feel strongly that Senator Sessions perjured himself, but what about you? We leave it to you, our readers and viewers, to decide. Should Jeff Sessions be charged with perjury following his misleading statements about meeting with officials of the Russian Government? Yes or no? Please cast your official vote just below via Twitter or Facebook.