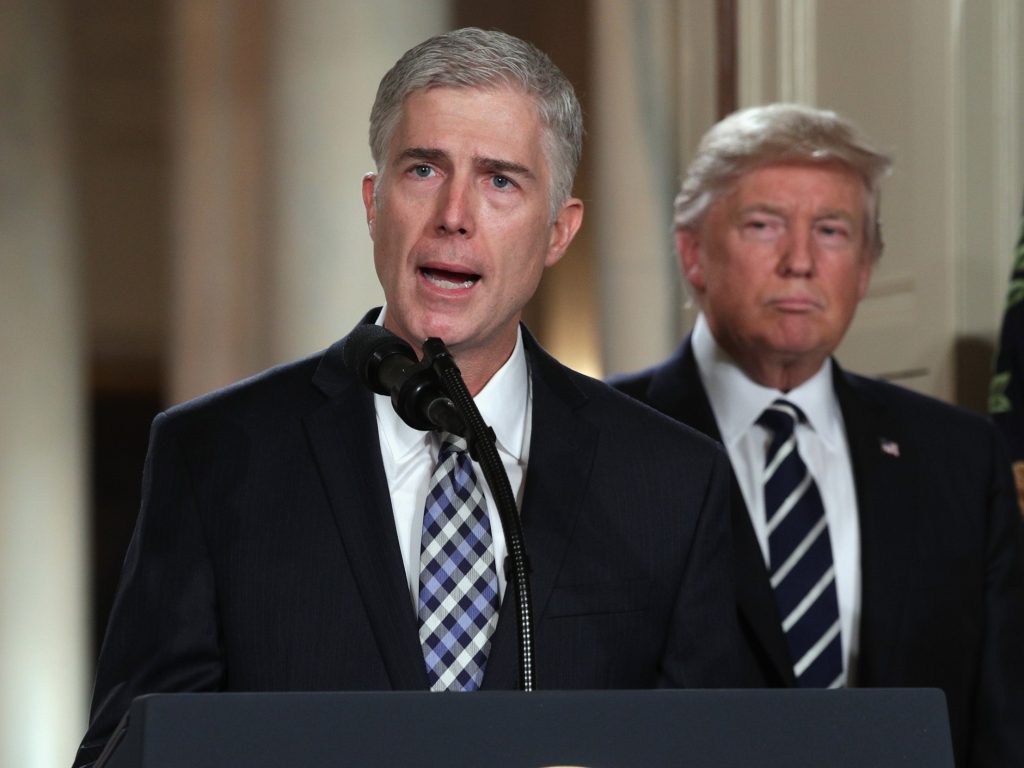 (EnviroNews Polls) — The nation’s capitol has been in a state of near upheaval this week following a controversial executive order signed by President Donald Trump to ban travelers from seven Muslim countries. If the news week hadn’t been eventful enough, on January 31, 2017, Trump, in a traditional East Room event at the White House, announced his nomination to fill the seat of the legendary late Justice Antonin Scalia: 10th Circuit Appeals Judge Neil Gorsuch.

Democratic lawmakers and their base aren’t just feeling the pain from Trump’s executive orders, they are still feeling the pain from an unprecedented move by Senate Republicans last year, when they all but boycotted Merrick Garland, Barack Obama’s nominee to replace Justice Scalia — refusing to even give the man a hearing.

The maneuver to leave the Supreme Court seat open until Obama was out of office left Democrats seething mad — a wound that is yet to heal. Several Democratic legislators have called this position a “stolen seat” on the court, and have declared they will block any nominee not baring the name of “Merrick Garland.”

Democrats are lining up in opposition to Trump’s pick already, some for the reason mentioned above; some for other reasons like Judge Gorsuch’s vote on the controversial Hobby Lobby case. To be clear, even Democrats saying they will vote against Gorsuch without first having a hearing, and in protest to the way Garland’s nomination was handled by Republicans, is quite unprecedented.

During the Obama Administration, GOP senators used the filibuster a record number of times, in an effort to thwart nearly every single piece of legislation supported by the Administration, as well as the former President’s nominees. At the time, the Senate had become quite dysfunctional, hardly able to pass a thing — so much so, that three years ago, led by then Senate Majority Leader Harry Reid, the Democrats deployed the “nuclear option,” changing the long standing Senate rules and eliminating the filibuster for Presidential nominees. But they intentionally allowed the filibuster to remain for Supreme Court Justice nominations.

The “nuclear option” today means voting to remove the filibuster rule for Supreme Court nominations as well — a procedure many people feel should always require a 60-vote majority due to the far reaching ramifications each new Justice inherently brings to the bench when they are confirmed.

The country is as divided as ever, with nearly every cabinet nominee vote so far, coming down on hard party lines — all Republicans voting “aye,” all Democrats voting “nay.” And having already neutered themselves from filibustering presidential nominees, Democrats have been powerless to thwart what many pundits have described as some of the most extreme and unqualified nominees in recent memory.

In a press conference on February 1, 2017, Trump encouraged Senate Majority Leader Mitch McConnell to use the nuclear option if Democrats move to obstruct Gorsuch’s appointment. While that might sound good in theory for the GOP, lawmakers that have been around for a long time (like Mitch McConnell) understand that this is a sword that cuts both ways and could come back to haunt them in the near and foreseeable future. Either way, employing the nuclear option and removing the filibuster for Supreme Court nominees would take the country into uncharted political waters.

We put it to you, our readers and viewers: Should Senate Republicans vote to deploy the “nuclear option,” removing the filibuster for Supreme Court nominees, if Democrats move to block Neil Gorsuch in retaliatory protest for the GOP’s boycott of Merrick Garland? Yes or no? Please cast your vote in the polls just below via Twitter or Facebook.