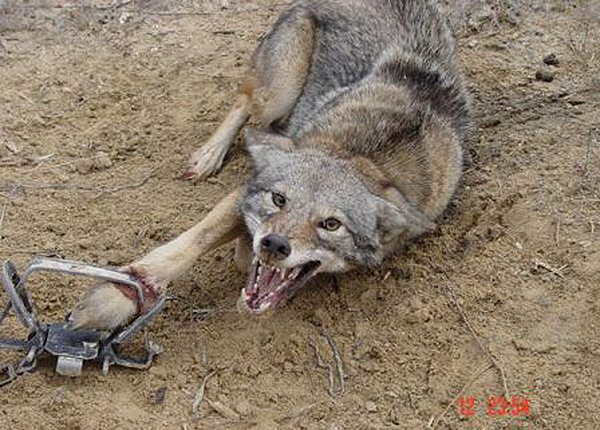 (EnviroNews Polls) — 3.2 million animals. That is the amount of critters and creatures brutally eradicated by Wildlife Services (WS) in America last year alone, by way of traps, snares, bullets and poisons — all with your tax dollars of course (at least if you are a U.S. citizen). 1.6 million of those animals were from species native to the United States. Many of those targeted were large, and in some cases, endangered predators like Mexican grey wolves and grizzly bears.

We’re not just making those numbers up. The stats come from Wildlife Service’s annual Program Data Report. Most of the killing happens “at the behest of the agriculture and livestock industries,” according to WildEarth Guardians and other prominent environmental organizations. Whenever a rancher or farmer has a problem with a predator, good ol’ Wildlife Services is who they call to handle it — like Guido The Animal Hitman — taking orders from its mob boss — Big Ag.

On the other hand, and to be fair, WS maintains on its website that its missions is to “provide federal leadership and expertise to resolve wildlife conflicts to allow people and wildlife to coexist.”

Wildlife Services is an agency that most American’s have never even heard of. It’s not to be confused with the U.S. Fish and Wildlife Service (USFWS), or your local state wildlife management agency. Wildlife Services is a century-old ancillary arm of the United States Department of Agriculture’s (USDA) Animal and Plant Health Inspection Service (APHIS) — and it operates almost completely in the dark.

WS has historically denied investigative reporters access at nearly every turn, and also fails to maintain a Twitter or Facebook page to update the public about its activities. The only thing you get in the way of social correspondence from the agency comes from its parent APHIS, in happy, shiny tweets like these:

Read how #WildlifeServices is helping the plover population rebound on #OregonCoast https://t.co/cvgHJNwqzS

Imagine for a second what the Twitter feed of Wildlife Services might look like (if it had one). Just blasted a grey wolf from a helicopter in Idaho that was bugging a local farmer — good job boys. Or, just injected cyanide pellets into the mouth of a coyote that reportedly ate a ranchers sheep — way to go! Or, today we gassed a litter of pups in its den that was going to grow up and bother farmers — excellent work by our team. For the life of us, we just can’t figure out why WS fails to maintain its own Twitter account to inform taxpayers of its events and activities, like nearly every other government agency. Even the NSA and FBI maintain social media accounts — but not WS. Hmmmm….

This writeup is for the purpose of introducing an opinion poll, and it is not our duty to skew the opinion of our readers — only to inform. In the past, many news organizations have referred to WS as a “secretive,” “shadow” or “rogue” agency, and there is little dispute about its extraordinary level of secrecy.

But before casting your vote in the poll at the bottom of this page, we encourage you to explore the recent long-read on WS, published by EnviroNews DC News Bureau, to obtain more information on WS and its animal-killing activities (embedded just below). You have our promise, we will share the results of this public opinion poll with the USDA and the American people at large. So, please make your voice heard by voting below, and thank you for your readership.