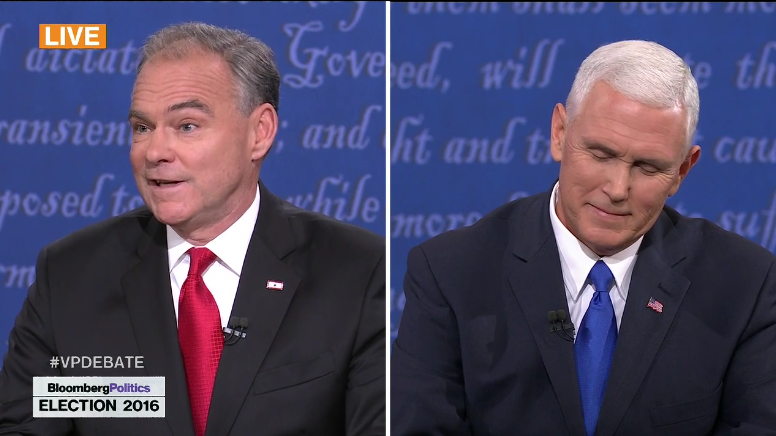 (EnviroNews Polls) — 2016 vice presidential candidates Mike Pence (R) and Tim Kaine (D) squared off in a debate for the first and last time on October 4 at Longwood University in Farmville, Virginia.

Kaine came out early by firing at Donald Trump’s positions repeatedly and relentlessly. Pence retaliated by attacking Hillary Clinton for her private email servers among other issues.

“I understand why you want to change the subject,” Pence said to Kaine over tax policy.

“You whipped out that Mexican thing again,” Pence said at one point after Kaine reminded Pence, and the massive viewing audience, of Trump’s positions on immigration.

CBSN anchor Elaine Quijano moderated the event, and was spoken over repeatedly by both candidates, having to ask the two to abide by time limits, her questions and the rules of the debate in general on multiple occasions, having to almost plead her case. “Gentlemen please,” Quijano said at one point when the two men continued to talk at the same time long after she had asked to move on to another subject.

On one occasion, Kaine declared he’s asked Pence to defend Donald Trump’s positions “six times,” and said Pence had not stuck up for Trump once. “I’m just trying to keep up with the insult-driven campaign [over here], said Pence after an assault on Trump’s views. “I’m just saying facts about your running mate, and I know you can’t defend him,” said Kaine.

Kaine also hit Pence on criticisms that Donald Trump harbors too many financial conflicts of interest to hold the office of president. “Americans need to worry whether Donald Trump will be concerned for America’s bottom line, or his own bottom line,” Kaine attacked.

After asking a question about North Korean nuclear tests, the two men reverted to arguments about the Clinton and Trump Foundations. “Alright, let’s turn back to North Korea,” the anchor said after having already reminded the men of the topic.

We put it to your, our readers and viewers, who won the first and only vice presidential debate between Tim Kaine and Mike Pence? Please cast your official vote via Twitter or Facebook in the polls below.