(EnviroNews California) — Bon Tempe Dam, Marin County, California — Restoring all the protections for wildlife under the Endangered Species Act (ESA/the Act) that the Trump Administration dismantled might be like trying to glue a broken mirror back together. The looming question: can it be done? It’s a tough job, and many lawmakers, experts and conservationists worry the cracks created under Trump’s Interior Department will always show.

In an exclusive sit-down interview with EnviroNews, Representative Jared Huffman (D-CA) — considered to have one of the highest environmental voting records in Congress — said he thinks there’s no easy, quick legislative fix. “I think it’s likely to be a patchwork of things,” he clarified.

And he might be right. Last month, big news came down from the Biden Administration, which unveiled a series of plans to reassemble and strengthen the ESA. On June 4, 2021, the U.S. Fish and Wildlife Service (USFWS) and the National Marine Fisheries Service (NOAA Fisheries) announced a proposal to revise, rescind or reinstate five key rules and regulations implemented under the Trump Administration.

“The U.S. Fish and Wildlife Service is committed to working with diverse federal, Tribal, state and industry partners to not only protect and recover America’s imperiled wildlife but to ensure cornerstone laws like the Endangered Species Act are helping us meet 21st century challenges,” USFWS Principal Deputy Director Martha Williams announced in a news release.

EnviroNews extensively covered the former administration’s unprecedented “war on wildlife.” It included creating a new, and limiting, definition for the word “habitat” after almost 50 years of the ESA not having one. And it issued a proposal requiring the USFWS to “assign weight” to the economic impacts industries claim would take place if an area were declared critical habitat. Before this, the agency only needed to consider the best available science and trade policy when making a listing decision; it wasn’t supposed to factor in potential economic impacts; in fact, Congress had already expressly forbade that in 1982.

The Biden Administration’s proposal calls for rescinding and revising those regulations and it also orders reinstating USFWS’ blanket protections for species listed as threatened, which would remove another hard blow inflicted on wildlife under Trump.

Environmental groups are hailing the changes as a step in the right direction. “These rules were an absolute disaster for endangered wildlife,” Noah Greenwald, endangered species director at the Center for Biological Diversity said in a news release. But imperiled wildlife isn’t limited to being protected by the Interior Department – an arm of the executive branch; Congress can act as well. And wildlife bills passed by Congress are more withstanding and not so easily thrown by the wayside with the whims of a new presidential administration.

Representative Raúl Grijalva (D-AZ) – one of the most well-known champions of environmental legislation in the House — pushed for the Biden Administration to do even more though, writing:

With climate change bearing down on us and no serious doubt remaining about the consequences of inaction, we should take this opportunity to update all federal standards as thoroughly as possible to prevent habitat destruction and biodiversity loss before it’s too late. This is a good start, and I’m looking forward to working with the Administration to keep this movement going.

Grijalva and Huffman signed a letter together with several other Democratic lawmakers shortly after Biden took office, imploring his newly implemented Interior Department, overseen by Secretary Deb Haaland, to stop a last-minute move made during the Trump Administration — a rule-change that stripped the iconic northern spotted owl (Strix occidentalis caurina) of 3.4 million acres of habitat. Biden’s Interior heeded the call and put a stop to the Trump rule, kicking it back into the environmental review process before the owl’s remaining habitat could be eroded. 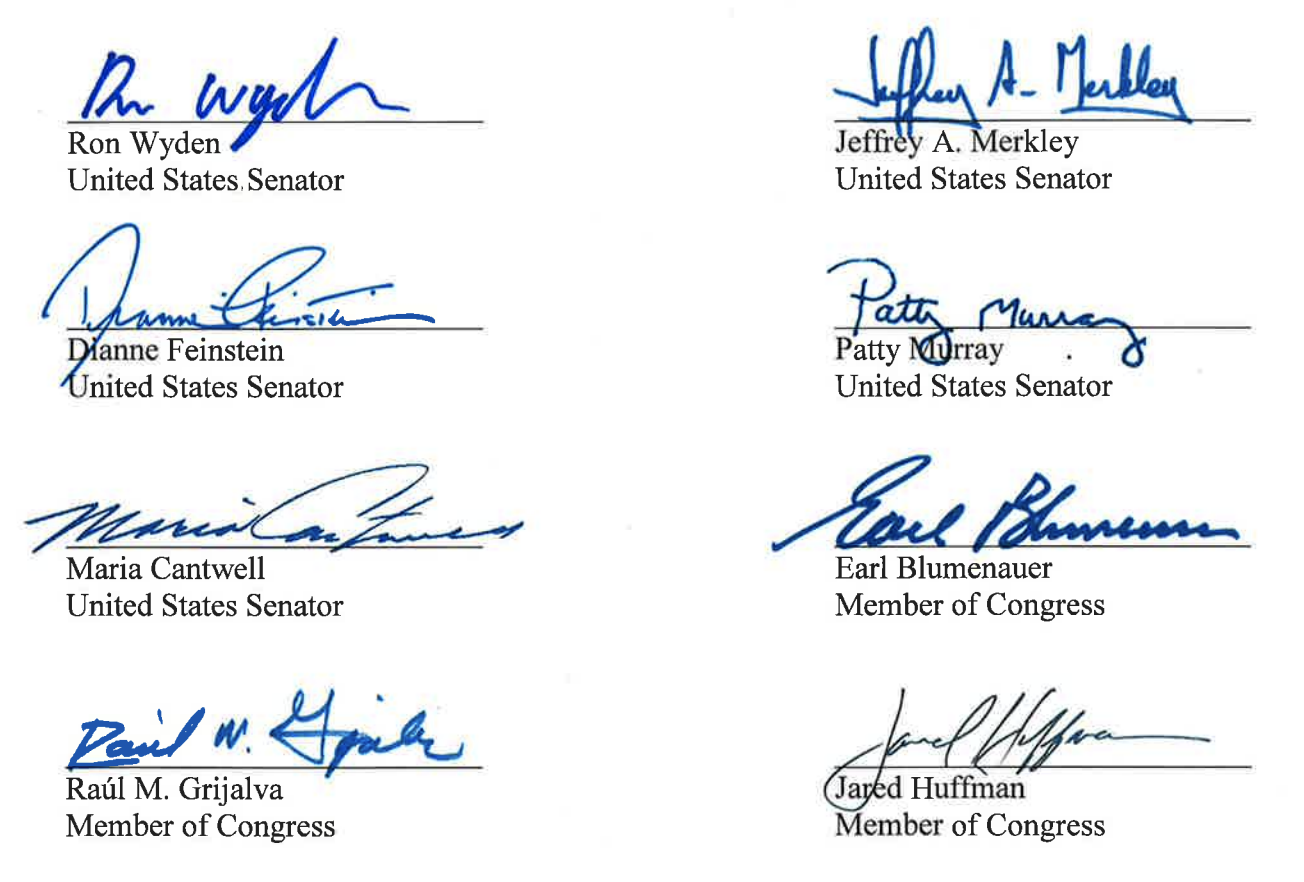 In 2019, Grijalva filed sweeping legislation that attempted to terminate many of the Trump Administration rules aimed at undercutting the ESA. But the Protect America’s Wildlife and Fish in Need of Conservation Act, or “PAW and FIN” for short, died in Congress.

In May, Rep. Grijalva came back swinging and introduced the Extinction Prevention Act of 2021 in the House. Sen. Richard Blumenthal (D-CT) filed a companion bill in the Senate. The proposed legislation would provide millions of dollars in funding to help protect some species in the U.S. – the ones most at risk of extinction, like various North American butterfly species including monarch butterflies (Danaus plexippus), freshwater mussels, and Southwest desert fish.

So how will Rep. Huffman, who has a 98 percent environmental scorecard according to watchdog groups like the League of Conservation Voters, be the hero conservations are counting on?

On March 26, 2021, in an exclusive interview with EnviroNews Editor-in-Chief Emerson Urry at Bon Tempe Dam in Marin County, Huffman said while he would support broad legislation to rebuild ESA, it may likely have to be mended back together piece by piece.

The four-minute on-camera segment can be seen in the video player atop this story. The transcript reads as follows:

Emerson Urry: Staying with the wildlife and some of these late-term things that happened at the end of Trump’s first term in office there. There was just an incredible barrage of rule changes, delistings, actual undercuttings of the Endangered Species Act itself. And I want to ask you about PAW and FIN — some legislation that I believe was introduced by Raúl Grijalva. That was intended, at the time to kind of offset some of these attacks that were going on. Is that something you support, PAW and FIN? Is that a way that, you know, potentially some of that damage can be rectified? Would the whole thing have to be rewritten now, after all of these assaults that we saw at the end of the Trump administration? Or, what [are] your thoughts and how to undo some of those? I mean, you know, gray wolves (Canis Lupus) and wolverines (Gulo gulo), and, you know, monarch butterflies not making it and several cuts on the Endangered Species Act itself. What’s the way to address all of that?

Rep. Jared Huffman: Well, I’m supportive of that kind of legislative fix; I’m also delighted that we’ve got entirely new people in charge of the Department of Interior and the Fish and Wildlife Service and the National Marine Fisheries Service — all the agencies that are responsible for overseeing and implementing the Endangered Species Act. And we’ve got active efforts already underway to undo a lot of the executive actions and rulemaking that did so much damage under the Trump Administration. So, I will certainly associate myself with any legislation we need to pass to undo that damage. But I’m also going to support efforts that are moving pretty quickly right now to get us back in the right place.

Urry: And so, you think it will be more of a piecemeal effort, kind of attacking each issue, one at a time? Or could there be a big, global overarching type of legislation like PAW and FIN that would…

Huffman: I think it’s likely to be a patchwork of things. And it’s going to depend on the individual rollback. Some of these things can be undone very quickly, and some already have. Others are going to take new rulemakings. The Administration, I think, will begin those, and we will support them in completing them. But if we’ve got to have an act of Congress, you know what the politics are like in the United States Senate. It’s harder to do.

The transcript to the second part of this interview segment, contained within the article body just above, reads as follows:

Urry: Well, and one thing that we observed in that rollback on the northern spotted owl, was they had made a cut to the Endangered Species Act itself allowing economic considerations to be factored into the listing process, essentially, for the very first time. I mean, people were always trying to meddle with it, and I believe in 1982 Congress had to step in an expressly forbid that and leave it only to the best available science and trade policy.  The Trump Administration got rid of that and from what we understand, the northern spotted owl was the first victim because the logging industry came in and said: Oh, hey, we have all these economic considerations. So, that seems to be a gaping hole in the Endangered Species Act — that, and the rollback they did that changed the definition of habitat. How ya’ gonna fix that?

Huffman: Well, I think they also prevented threatened species from enjoying the full protections proposed for threatened and endangered species. There is a number of rollbacks, but I agree with you that adding economic factors into the listing decision is maybe the most pernicious because you’ll just never get a listing. It’s always going to be inconvenient to someone to list a species and to do the things necessary to keep them from going extinct. But it really makes a mockery of the entire Endangered Species Act. It’s supposed to be about science.

Trump Nukes Environmental, Health, Endangered Wildlife Protections on His Way out the Door

(EnviroNews DC News Bureau/EnviroNews Nature) – While the door on Trump’s official authority may be closing quickly, his administration is still working feverishly to entrench his “anti-nature,” pro-business development agenda throughout the U.S. Government. Opponents say Trump has done everything he can to leave behind a legacy that…

(EnviroNews California) – Bon Tempe Dam, Marin County, California – At the end of former President Trump’s only term in office, his administration worked to dismantle the Endangered Species Act (ESA/the Act) on several fronts. One of those rollbacks changed the rules and allowed the U.S. Fish and Wildlife…

Did You Know There is a ‘God Squad’ That Can Overrule the ESA and Allow Any Species to Go Extinct? Rep. Jared Huffman Explains

(EnviroNews California) – Bon Tempe Dam, Marin County, California – What do snail darters, whooping cranes, and the iconic northern spotted owl have in common? They all had close calls with the so-called “God Squad.” The God Squad? The group’s existence and power even surprised EnviroNews Editor-in-Chief Emerson Urry when Representative Jared Huffman…