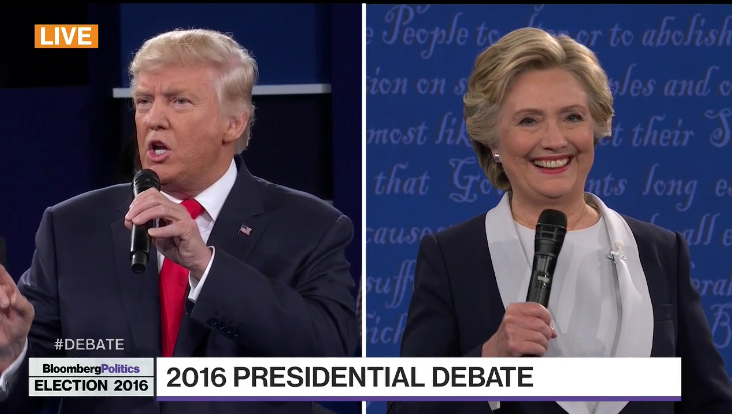 (EnviroNews Polls) — Hillary Clinton and Donald Trump squared off in their most vicious encounter yet at the second of three head-to-head presidential debates on October 9, 2016, at Washington University in St. Louis. The event was moderated by CNN’s Anderson Cooper and ABC’s Martha Raddatz, and was watched by tens of millions around the U.S. and the world.

The debates comes on the heels of a bombshell leak to the Washington Post, featuring a decade-old video of Donald Trump uttering some of the most controversial remarks ever made by a major party candidate.

Following two public apologies from Trump, Utah lawmakers Jason Chaffetz and Mike Lee retracted their support for their party’s candidate on “principal.” The GOP has since been in a behind-the-scenes frenzy in an effort to bandaid the damage. Even Trump’s VP was unable to defend Trump’s remarks, canceling several of his own stump events following the media firestorm. Nevertheless, Trump turned out for what will surely go down in the record books as one of the most merciless presidential debates on record.

For the first time EnviroNews is aware of, Donald Trump started off his opening statement in response to Clinton’s by saying, “I actually agree with that. I agree with everything she just said.”

Anderson Cooper wasted no time at all, going straight to the jugular regarding Trump’s recent remarks about “grabbing women’s genitals” without their consent. “You bragged that you assaulted women. Do you understand that?”

Clinton said in her follow up, “What we all saw and heard on Friday was what Donald Trump thinks about women. What he does to women. We’ve seen this throughout the campaign.” “We’ve seen him insult women. We’ve seen him rank women on a scale from one-to-ten.” “We saw him denigrating a former Ms. Universe in the harshest of personal terms.”

After Raddatz delivered another question to Trump about how, or if, he was a “changed man” since the episode with the comments on the bus a decade ago. Trump followed up by bashing Bill Clinton for his behavior toward the female gender saying, “There’s never been anybody in the history of politics that’s been so abusive to women.”

At one point, Trump attacked Clinton and the Democratic party, accusing Debbie Wasserman Shultz and the party of illegally rigging the election to screw Bernie Sanders. “I was so surprised to see him sign on with the devil,” Trump said.

After Trump went on a tirade about Clinton allegedly “acid washing” emails, he referred to “friends” he had in the FBI and said a special prosecutor was going to be appointed to investigate her.

“It is so good someone with the temperament of Donald Trump is not in charge of the law in our country,” Clinton responded. “Because you’d be in jail,” Trump fired back to cheers and applause.

At one point, Trump complained to Cooper about why he wasn’t grilling Clinton about her 33,000 deleted emails saying, “Nice. One-on-three.”

Following a question from a crowd member about healthcare, the two argued trying to let the other one go first. “Go ahead Donald you can start,” said Clinton. “No go ahead Hillary, I’m a gentlemen,” Trump replied to laughter from the audience.

In response to Clinton’s answer regarding a question about the current tragedies in Aleppo, Syria, Trump said, “[as Secretary of State] you were there with the ‘line in the sand,'” to which Clinton busted in and said, “No I wasn’t! I hate to interrupt, but at some point, you’ve just got to say something”

The two went back and forth at each other for about 90 minutes on myriad topics, in their most adversarial meeting to date.

We put it to you, our readers and viewers: Who won the second presidential debate? Hillary Clinton or Donald Trump? Please cast your official vote via Facebook or Twitter in the polls just below.

(EnviroNews Polls) – Hempstead, New York – The two most unpopular presidential candidates in U.S. history squared off on September 26, 2016, for the first of three debates at Hofstra University in Long Island, New York’s Hempstead Village. Despite the two candidates holding the worst favorability ratings since…

(EnviroNews Polls) – 2016 vice presidential candidates Mike Pence (R) and Tim Kaine (D) squared off in a debate for the first and last time on October 4 at Longwood University in Farmville, Virginia. Kaine came out early by firing at Donald Trump’s positions repeatedly and relentlessly. Pence…